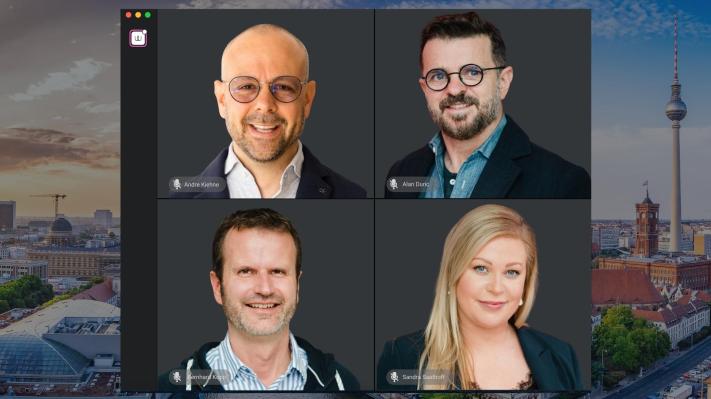 The messaging tool — which launched almost a decade ago — was originally conceived as a fresh take on secure consumer comms, drawing on certain connections to Skype (including early backing from Friis).

But with increasingly fierce competition in the consumer space, from the likes of WhatsApp and Signal (and other E2EE messaging apps), the team pivoted focus to the b2b market — a move that caused a bit of consternation among certain privacy advocates when it emerged, back in 2019, that Wire had taken in its first ever tranche of VC funding and moved its holding company from Europe to the US. (Though the team defended the changes as just a practical reflection of its refocused b2b mission.)

Wire did not close its app off to consumer users entirely, and still offers a free version for download, but these days the tool is fully focused on the enterprise market — offering an extensive suite of collaboration, compliance and user management features, as well as the ability for customers to store the encrypted user data on premise (it says the majority of its customers opt for this) rather than in Wire’s (Europe-based) cloud.

So while Wire may have flown under the radar of many consumers, it has continued growing usage and touts a doubling of its Annual Recurring Revenue (ARR) in the last twelve months — off the back of what it dubs “significant” customer wins across private and public sectors.

It sells in to heavy-weight customers where security is very much front of mind — including governments, militaries and regulated businesses with high compliance requirements around information (such as the finance and healthcare sectors).

This explains why it’s not able to actually name those “significant” recent customer wins — though it can point to having five of the world’s G7 governments on board, including the German federal administration and the federal parliament (aka, the Bundestag). And Wire’s adoption by Germany federal authorities has garnered it some local press attention related to usage by politicians after the app was recommended to them by the federal office for digital security.

“The last German government was formed on Wire… and what is interesting is we didn’t have a clue about it!” says co-MD and co-founder Alan Duric, confirming the team only gleaned that particular high level gem of a detail when they read about it in the German press — which is of course a great advert for the robust privacy, between provider and user, that E2EE provides.

Duric, who has occupied a number of roles at Wire throughout its decade run — and is currently splitting the top exec job with a new hire, Andre Kiehne, following a decision by prior CEO, Morten Brogger, to step down to seek his next challenge — says that as well as robust security, data sovereignty is a major motivating force for customer adoption.

“Microsoft completely left that space — they are completely cloud-based,” he points out. “We enable a number of customers to run secure collaboration and communication on prem and in a number of cases… there is a number of large networks that are being built that are not even connected to the public Internet.

“For instance the German government — and also we’ve seen it with some of the other prospects — they are running a network which is not connected to the public Internet [for security reasons]. And you will see, I think, more and more of those cases.”

Adapting its product so the software is still able to function in a ‘airgapped’ network scenario, without an Internet connection being on tap, is thus something that distinguishes Wire from more mainstream business comms tools.

He also points to Wire being built on MLS, a security standard for E2EE, as another reason it’s winning government custom in Europe — support for MLS is, he suggests, being seen as important for enabling the secure messaging interoperability envisaged by the EU’s Digital Markets Act (DMA), a regulation which targets Big Tech ‘gatekeepers’ ability to leverage network effects to lock users inside walled gardens.

“I hope… [in a couple of years we] will see MLS being a driving force to open up all those big monopolies — from Microsoft, from Google, WhatsApp, from Facebook, so that all of those systems will be able to interoperate,” he adds. “This is… one of the main premise behind the DMA, and this was also something that was very important for the German government — that the solution which they buy is based on open standards.”

In all, wire says it has more than 1,800 customers at this stage — a top-line figure that hasn’t changed since it last raised, a $21M Series B round in April 2021 — but that’s down to the heft of some of the customers, per Duric, with a lot of focus going on chasing down “very large” customers, such as governments. (He also confirms it’s seen double-digit growth in customer numbers since last year.)

While the relatively modest size of the Series C vs last year’s B looks to be a reflection of Wire’s rising revenues mediating its need for external capital — with turnover up 2x since last year and the co-MD saying it’s aiming to double revenues again over the next year.

He says the plan for the Series C is to accelerate Wire’s penetration and scale in markets “where we had a pretty good start” — such as in sectors like government and the military — as well as looking to expand its focus on regulated markets like financial services.

On the latter, he points to some large fines that have recently hit US banks for failing to monitor employees using unauthorized messaging apps as illustrative of the opportunity Wire is spying.

It has created a compliance tool for customers who need to be able to audit employees comms which seeks to tread a tightrope between having E2EE and enabling access to comms data in the clear to meet specific legal requirements. (The short version of how Wire does this is by enabling customers to provision a regulated employee’s account to include a virtual device, running on the server-side, which operates with their same user credentials and copies all their content to auditable storage — but with the individual user being responsible for authorizing the provision, so, basically, there is no silent copying going on; the user has to be aware their data is being cloned for potential audit.)

“I hope we built a solution that is not compromising security at all — or as little as possible — and is providing full compliance to those that need it,” adds Duric. “This is one of the segments where we are getting traction.”

He also suggests its approach could stand it in good stead given (potentially) new regulations in the EU, related to combating CSAM, which could put pressure on E2EE platforms to be able to scan content. “[It’s] a very, very difficult area and a question that’s ahead of us but I think there [on the b2b market side] with this Wire compliance module we nailed it,” he responds on that, predicting that consumer E2EE messaging apps will face a trickier challenge if lawmakers push ahead.

Elsewhere, the war in Ukraine is also generating leads for Wire in the energy sector, according to Duric — who says it’s had inbound from operators of nuclear plants interested in adopting the tool to be a conduit for all of their confidential comms and for “crisis collaboration” — i.e. in the event there’s an outage affecting their day-to-day cloud-based business comms platform. “Anything that is confidential cannot go on Microsoft Teams,” he argues.

On the competition front, a closer rival to Wire than Microsoft is another European startup, Element — which builds on the Matrix protocol — and is similarly touting its “enterprise-grade messaging and collaboration solution” as a fix for the ‘WhatsApp at work’ compliance problem.

Duric agrees Matrix/Element is a close competitor. “Some of the main differences are we are now getting fully based on MLS — they are jumping on that train a bit later,” he suggests. “The other thing is Wire is visibly stronger when it comes to real-time communications: Group video calls, group audio calls, screensharing, all of this real-time comms aspects because there they’ve been relying for quite a bit on Jitsi… So on that side we have [a lead].”

Looking ahead, Duric says the team is “fully focused on execution”.

“We are now tuning some of the things for this next chapter where we are going to be accelerating — and also where we are expecting some of our large customers, like the German government did the digitalization project and a number of other larger projects that they’re going to be working on that is going to be used as fuel for another inflection point,” he tells TC. “Also one of the areas that we are looking into is with SDKs where you’ll be able to embed Wire into a number of other solutions — either if it is in a banking sector or health sector or a number of other sectors so there it is really, from a number of perspectives, a completely new chapter ahead of us in the next couple of years.”

Wire’s next chapter means Duric will be entering his second decade at the startup — but he remains excited for what’s to come.

“It is kind of like my baby and it still has quite a bit to do before it grows up. And now with MLS I’m super excited because I feel a lot like with my previous startups when we were working on a webRTC technology that we started at Global IP Solutions… and then it got deployed to billions of people and now the big vision is the same with MLS — that MLS gets deployed to billions of people.

“Just before we had a vehicle — Skype — that was used first to deploy [webRTC, a billion-scale technology] and then a number of others deployed it. After [that] now the vehicle in a first phase [is] Wire — I hope that it enables the DMA to start happening and some of these big monopolies get reshaped and we have communication solutions for the next ten years which are not going to be proprietary, which are not going to be closed and they are going to be very secure and respecting users privacy,” he adds. “That’s the mission.”

Friis, Skype’s co-founder and Wire’s investor, also remains bought in. “The need for secure communications is constantly growing. With its end-to-end encryption that has been independently audited and its code that is open source, Wire allows any organisation to deploy a communication product they can trust,” he said in a supporting statement accompanying the Series C.

4 Things To Do After A Workplace Injury