Beijing was cloaked in thick yellow smog on Monday with pollution levels surging off the charts as the worst sandstorm in a decade descended on China’s capital. City residents used goggles, masks and hairnets to protect themselves from the choking air, with landmarks including the Forbidden City and the distinctive headquarters of state broadcaster CCTV partly obscured behind an apocalyptic-looking haze of dust and sand. The city government ordered all schools to cancel outside sport and events and advised those with respiratory diseases to stay inside, while some highways were partially closed. 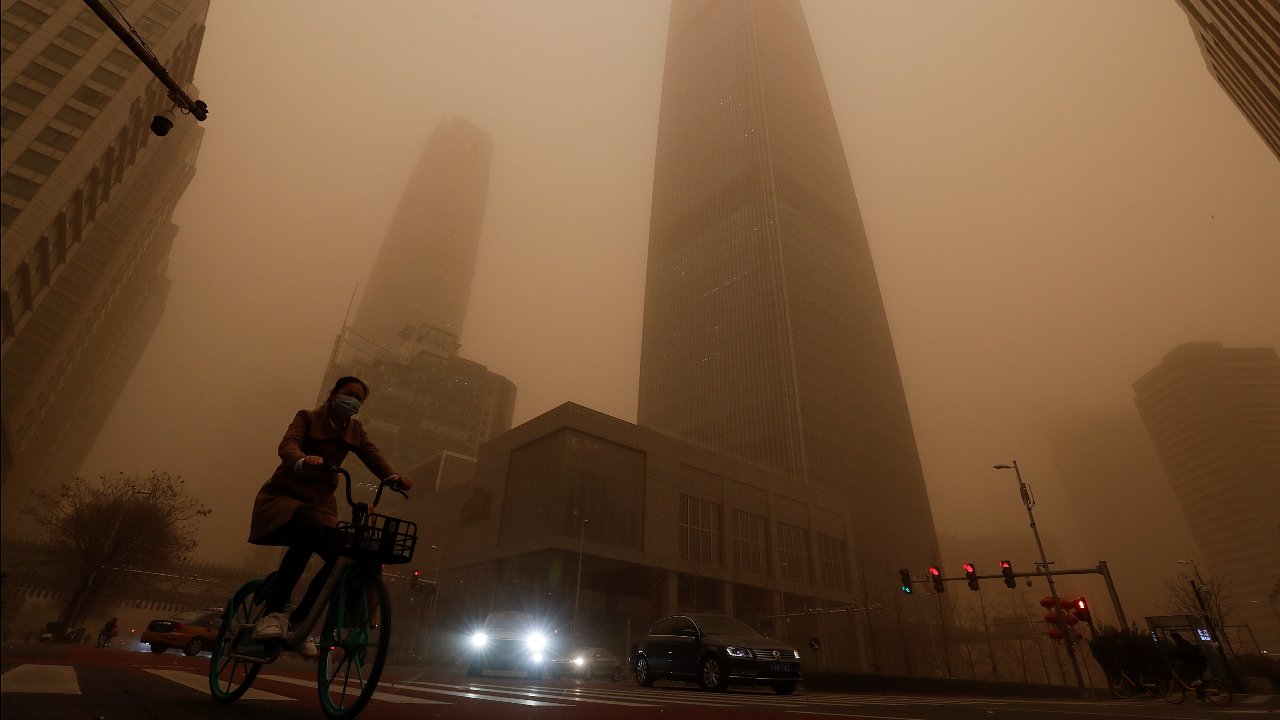 A cyclist and motorists move past office buildings amid a sandstorm during the morning rush hour in the central business district in Beijing, Monday, March 15, 2021. The sandstorm brought a tinted haze to Beijing’s skies and sent air quality indices soaring on Monday. Image credit: AP Photo/Andy Wong

The poor air quality was due to a sandstorm from northern Mongolia, where authorities said it had left several dead and dozens missing, before being carried south by winds and reducing visibility in Beijing to less than 500 metres.

Authorities described it as the worst sandstorm in a decade to hit the city, compounding days of hazardous PM 2.5 pollution in the capital.

Under heavy skies, which draped buildings in an eerie glow, Beijing residents fretted over the health risks.

“I feel every breath will give me lung problems,” Beijing resident Zhang Yunya told AFP.

Flight tracker Variflight said more than 350 flights had been cancelled at the two airports on Monday, with dozens more delayed.

“This sandstorm is very fierce,” said Pan Xiaochuan, a Beijing-based environmental health expert. “I remember the sandstorms ten years ago blew away in less than an hour, but I’m afraid that this one will not have passed through the whole day.”

Six people were killed by the sandstorms in neighbouring Mongolia, the country’s national emergency management agency said Monday, including a five-year-old boy from a herder family.

Another 81 people were still missing as strong winds and dust storms swept the landlocked country, which borders China.

Discussion of the orange haze lit up online discussions — with 210 million views on social media platform Weibo by Monday afternoon.

“This orange red sandstorm makes it looks like the end of the world,” said one Weibo user.

Pollution in the city was at “hazardous” levels, according to air quality monitoring website Aqicn, as the reading soared off the scale for many apps.

But the state-run Global Times said PM 10 pollution in the six downtown districts was “over 8,100” on Monday morning — a figure which would be 160 times the recommended limit.

Smaller PM 2.5 particles, which seep deep into human lungs and cause respiratory illnesses, were also at a hazardous level of over 560 on Monday morning — more than 20 times the WHO recommended daily limit.

China cut its national average level of airborne PM 2.5 dramatically between 2015 and 2019 and the government has announced an ambitious target to reach carbon neutrality by 2060.

But Li Shuo of Greenpeace China told AFP that “intense” industrial activities have contributed to bad air in Beijing over recent weeks, with the production of steel, cement and aluminium already overtaking pre-pandemic levels.

This was exacerbating the sandstorm conditions, which are “a result of extreme weather conditions and desertification”, he said.