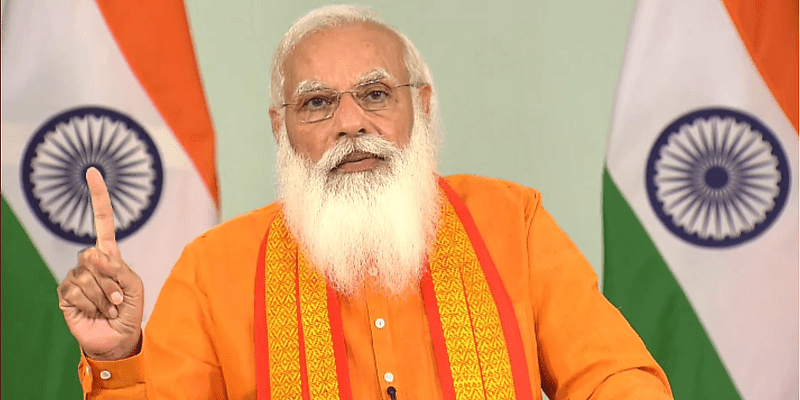 On the seventh International Yoga Day, Prime Minister Narendra Modi said the ancient Indian discipline remains a “ray of hope” and a source of strength for the people in the fight against the coronavirus pandemic.

The prime minister said frontline warriors and doctors have told him that they made yoga their “protective shield” while fighting the pandemic.

Addressing a Yoga Day programme, Modi also announced that in collaboration with the World Health Organization (WHO), India has taken another important step as the world is going to get the power of ‘M-Yoga’ application, which will have many videos of yoga training based on Common Yoga Protocol available in different languages.

Terming this as a great example of the fusion of modern technology and ancient science, the prime minister expressed hope that the M-yoga app will help in spreading yoga the world over and contribute to the efforts of ‘One World, One Health‘.

Talking about yoga’s role during the pandemic, Modi said there were several instances of yoga sessions conducted by doctors and nurses in hospitals and experts were stressing the importance of breathing exercises like ‘pranayama’ and ‘anulom-vilom’ in strengthening the respiratory system.

“At a time when the whole world is fighting the coronavirus pandemic, yoga remains a ray of hope,” Modi said.

The prime minister noted that there may not have been any major public events in countries across the globe and in India for around a year and a half, but the enthusiasm for Yoga Day has not diminished.

For most of the countries of the world, Yoga Day is not intrinsic to their culture and in this difficult time, people could have forgotten about it and ignored it, but on the contrary, their enthusiasm and love for yoga has increased, he said.

In the last one-and-a-half years, lakhs of new yoga practitioners have been added in every corner of the world, Modi said.

“When the unseen coronavirus knocked on the doors of the world, no country was prepared for it in terms of resources, capability, and mental toughness. We all have seen that in such difficult times, yoga has become a great source of inner strength,” he said.

“Yoga tells us that so many problems might be out there, but we have infinite solutions within ourselves. We are the biggest source of energy in our universe. We do not realise this energy because of the many divisions that exist,” he said.

“At times, the lives of people exist in silos. These divisions reflect in the overall personality as well. The shift from silos to union is yoga. A proven way to experience a realisation of oneness is yoga,” he asserted.

Modi said the mantra of ‘Vasudhaiva Kutumbakam’ which India has followed for ages, is now finding global acceptance, noting that “we all are praying for each other’s well being”.

“If there are threats to humanity, yoga often gives us a way of holistic health. Yoga also gives us a happier way of life. I am sure, yoga will continue playing its preventive, as well as positive role in healthcare of masses,” Modi said.

The prime minister said despite the pandemic, this year’s theme for the International Yoga Day “Yoga for wellness” has raised the morale of people.

He wished for the health of every country, society, and individual, and hoped that “we will be united and will strengthen each other”.

Yoga shows us the way from stress to strength and from negativity to creativity, he asserted.

Modi noted that medical science focuses as much on “healing” as on treatment, and said yoga plays a role in healing.

Many schools now begin their online classes with yogic exercises like ‘pranayama’, he said, adding that this prepares children physically to deal with Covid.

Quoting the great Tamil saint Thiruvalluvar, the prime minister said Yoga goes into the root cause of a disease and is instrumental in healing.

He expressed satisfaction that globally, research is being conducted on the healing properties of yoga.

In his address, the prime minister also emphasised the holistic nature of yoga and said that it takes care of physical health as well as mental health.

Quoting from Gita, Modi said, “We need to continue moving on the collective journey of Yoga as Yoga has a solution for everyone. It is important that Yoga reaches every person while keeping intact its foundation and core.”

“Yoga acharyas and all of us should contribute to this task of taking yoga to everyone,” the prime minister said.

Crypto Bill To Be Tabled In Parliament After Cabinet Nod: Finance Minister

The Year Of Indian Edtech — Will The Bubble Burst In 2021?