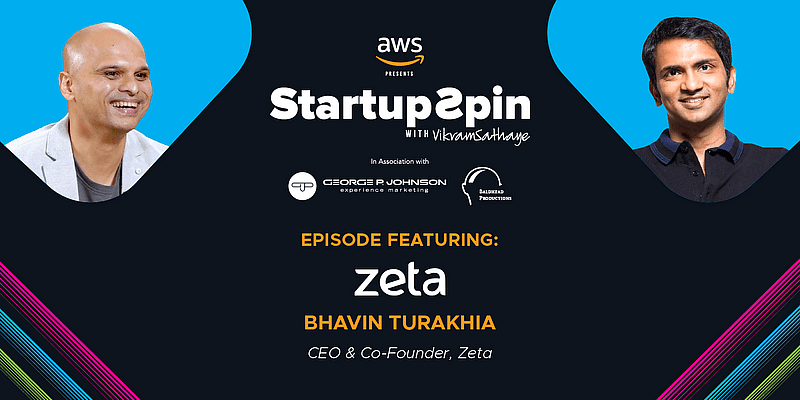 Just like batting maestro Sachin Tendulkar, serial entrepreneur Bhavin Turakhia made his debut at the age of 16. Perhaps the only difference between these two gamechangers is that Sachin became a sports legend, and Bhavin went on to become a billionaire. However, the parallels between sports and entrepreneurship don’t end there. In the second episode of Startup Spin – a show hosted in association with AWS, George P Johnson Experience Marketing and Bald Head Productions – Bhavin Turakhia, CEO and Co-founder of Zeta joined host and leading cricket presenter Vikram Sathaye for a discussion around sports, biographies, failure, Cognitive Behavioural Therapy, and much more.

The no-holds-barred discussion covers everything from biographies to banking. Bhavin opens up about his favourite pastimes, partnerships with AWS and Pilates.

Here are some highlights from the episode:

Back to the beginning

Born to a middle-class family in Mumbai, Bhavin started coding when he was 10 years old. He recalled how his father had bought him 40 books on coding after he showed interest. And how disappointed he was with the antiquated college lessons in computer science, leading him to drop out and start something on his own.

Bhavin also spoke about his father, who invested a significant amount of time in convincing him to continue his education in engineering, but would always end with, “You have to make your own mistakes and learn from it, and I will support you no matter what.”

The billionaire confessed that whenever he wanted to start operating in a new industry, business space, or learn a new function, his first step was to read about it. Fond of reading biographies, Bhavin believes they are a great way of showcasing failures and successes – both of which gave him strength when he had no idea what he was doing, or how to set up businesses in completely new industries. This was when he decided to be an entrepreneur – a choice that neatly dovetailed with reading biographies of the biggest businesses in the world. Over the years, he has devoured books on Bill Gates and Microsoft, Apple, IBM, Intel, Mcdonalds, Xerox Corp and more.

Although he isn’t a professional athlete, Bhavin plays tennis and squash, practices yoga, enjoys hiking, water sports and Pilates. Often drawing parallels between sports and business, Bhavin spoke about the key lessons learnt from sports – how to identify, track and recruit the right talent for a team and a business.

He said, “I’ve always believed a significant amount of our success has been derived from the fact that we hire the best talent … and nothing else in the world treats this at the same degree of importance as sports does.”

He discussed how cricket and soccer teams will often track the metrics of an individual player. How the fanaticism about measuring KPIs and tracking real-time scores help them identify the player who matches their goals, team culture and drive for excellence.

A day in the life of an entrepreneur

He feels that success has a binary outcome – either you fail or you succeed. Drawing a parallel with Rafael Nadal, who, despite being on top of his game, continues to hone his skills, Bhavin too believes in mastering his skills. In the journey to mastery, there is no failure or success, there are only lessons to learn.

“In fact, Silicon Valley and our entire industry, actually went so far as to remove the word failure, and we actually call it pivot, so no company ever fails, we only pivot,” he shared.

With respect to personal mastery, Bhavin also shared that he practices Cognitive Behavioral Therapy to overcome negative biases and emotions. True to form, he downloaded a book on becoming a Cognitive Behavioural Therapist!

On his journey with AWS, Bhavin explained how truly collaborative partnerships must work. Using Zeta as an example, he said that their competencies can help legacy banks start a full-fledged neo digital bank, along with other services. What makes this a true partnership, is that there is no competition involved. The goal is to enable them to become better banks. He summed it up by saying, “It’s always best to focus on our competency and leverage others for their co-competence.” He believes the same idea fuels what AWS does. Zeta, in many ways, was a pioneer of cloud native platform for banks, which is why they have a close-knit relationship with AWS.

Although banks have been slower to move to cloud as compared to other industries, Bhavin believes this is changing thanks to the experience and expertise that AWS provides.