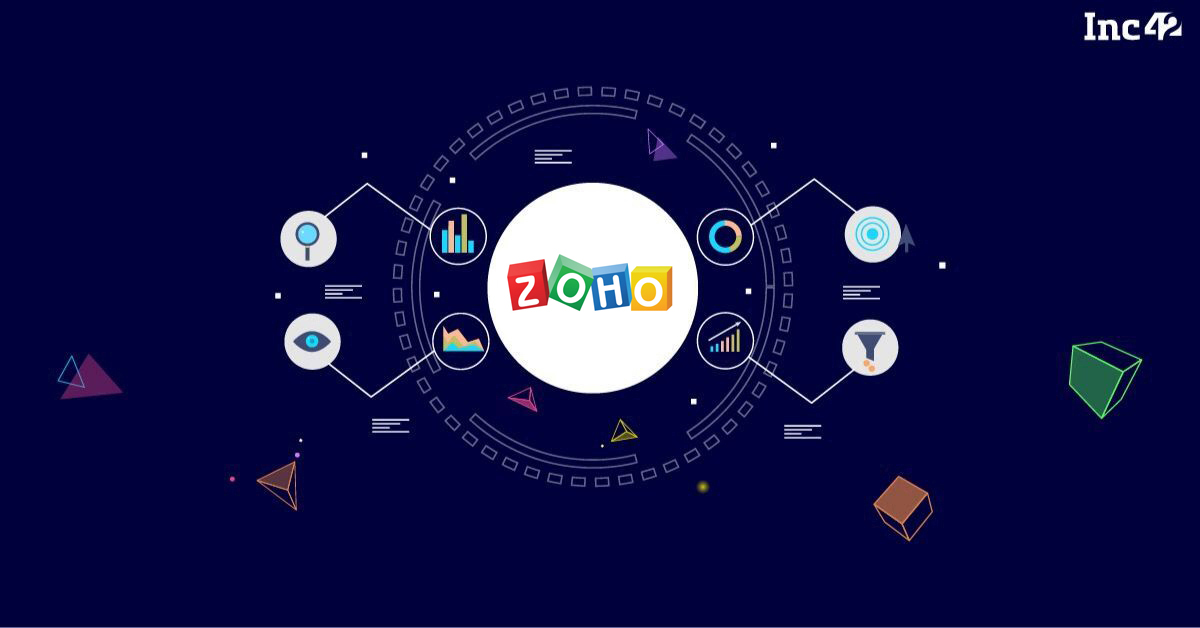 On a consolidated basis, Zoho Corp’s profit increased to over INR 800 Cr in FY2020

The company doubled its profit on a standalone basis, whereas its revenue almost touched INR 2500 Cr

About 54% of the company’s total spending went into employee benefits, representing a 10% increase from FY2019

Chennai and San Francisco-based software-as-a-service (SaaS) giant Zoho Corp has reported a 29% increase in its consolidated revenue in the financial year 2020, as it continued its profitability streak for yet another year. The bootstrapped company ended FY20 March with INR 4,385.99 Cr in revenue, a sharp spike from the INR 3,410.74 Cr it had reported in the previous year.

Zoho is not only one of the few profitable unicorns in India, but it has remained so since its launch in 1996. The company was founded by 2021 Padma Shri awardee Sridhar Vembu, who is also the CEO. The company’s filings revealed that Vembu has about a 5% stake in the company, while his sister Radha Vembu is the majority stakeholder with 47.8% holding. Zoho cofounder and brother of Sridhar Vembu, Sekar Vembu holds 35.2% stake in the company.

It also launched a single software platform Zoho Workplace last year to allows customers to enhance contextual communication, continuity of processes and bring in more conveniences in running business operations. Zoho Workplace is Zoho’s bet against Google and Microsoft, which already offers such platform and tools.

On a standalone basis, Zoho Corp’s main Indian entity, Zoho Corporation Private Limited, almost doubled its profit to INR 746.14 Cr from INR 392.3 Cr reported in the previous year. The company also reported a 35.56% hike in revenue amounting to INR 2,477.61 Cr. Up to 96% of the company’s revenue came through operations, while the rest were earned as interest income on investments, fixed deposits and  ‘dividend income non-current investments’.

The company’s expenses grew 15% overall, which is a minor increase given the scale of the company and Zoho’s massive worldwide presence.

About 54% of the company’s total spending went into employee benefits, representing a 10% increase from last year’s INR 757.43 Cr spent in this area. The company paid INR 721.41 Cr in salaries in FY2020 while INR 63.4 Cr was spent as ‘staff benefit expense’. This was the biggest expenditure for the SaaS giant in the year.

Advertising and promotional expenses were the second biggest area of spending, with  INR 113.4 Cr spent on promotional activities, growing only 9% from last year’s INR 103.81 Cr. Besides this, the company’s corporate social responsibility (CSR) spending increased 4X, from INR 6 Cr to INR 24 Cr in FY2020.

The company has not undertaken any research and development (R&D) activity in any specific area in FY2020, hence there were no technology absorption expenses for the company.

Other significant areas of spending ‘rent’, ‘legal professional charges’ and ‘depreciation, depletion and amortisation expenses’, where the company cumulatively spent about INR 295.53 Cr or 19% of the total spending.

Zoho’s legal professional charges grew 11.5%, from INR 78 Cr to INR 86.9 Cr in FY2020, primarily increasing on the back of its legal battle with rival Freshworks over IP infringement.

According to a report by Bain & Company, first-generation founders like Sridhar Vembu of Zoho and Mathrubootham of Freshworks have played a pivotal role in India’s SaaS journey by actively engaging to build a community of budding entrepreneurs. While Zoho and Freshworks are the poster boys of the Indian SaaS club, the companies have not been very fond of each other in recent times.

Earlier this month, Freshworks announced that it surpassed $300 Mn (INR 2190 Cr) in annual recurring revenue (ARR) for FY21, with a 40% increase in revenue in the calendar year 2020 as the pandemic forced companies to adopt digital transformation and strengthen their remote operations through enterprise tech tools.

Zoho Corp filed a lawsuit against Freshworks in March 2020. The company claims that Freshworks, which was started by two Zoho employees Girish Mathrubootham and Shan Krishnasamy in 2010, stole its confidential information and built the business as well as gained investors’ interest. Zoho, in the lawsuit, also explained how many of Freshworks’ product offerings originated as tools developed for the company’s own internal use. This includes Freshworks initial offerings customer support tracking and management software Freshdesk as well as IT Service Management (ITSM) tool Freshservice. Zoho alleged that the two Freshworks founders continued to develop other products which were in line for launch at Zoho.

Besides this, Zoho has also alleged that Freshworks recruited over a hundred employees from Zoho to gain access company’s confidential customer and competitive marketing information. About seven employees from Zoho’s technical and sales team joined Freshworks in the first two months of 2020. The company has also accused Freshworks of improperly accessing Zoho’s customer data. As the legal battle takes its course, the legal professional charges for both the companies are bound to rise.

CoinDCX To Launch DeFi And Web3 App Okto, To Allow Access To Over 100 DApps

Tips for Getting a Loan While Self-Employed

What is Lead Generation? How such a concept changes the way of competitive business