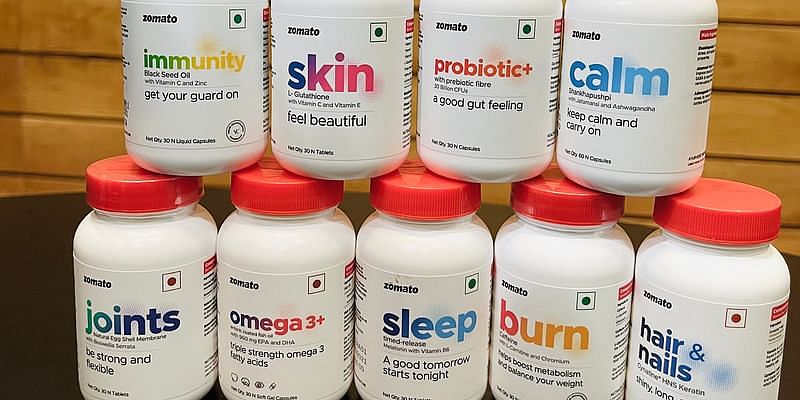 Gurugram-based foodtech unicorn Zomato has added its own product line of health and dietary supplements. Zomato’s Founder and CEO Deepinder Goyal announced on Twitter the company’s entry into nutrition supplements or ‘functional food’. The supplements are sold by Zomato’s own brands and are made in India. Deepinder said that the ‘functional’ foods will be soon available on Zomato’s app for orders.

Responding to people’s questions on the micro-blogging site, Deepinder said that they are made in India and will be delivered within 15 minutes on the back of its 1.5 lakh delivery partners in its fleet. He also writes that these dietary supplements have the “highest possible levels of quality checks”.

Compositions are a personal choice though, he added.

Zomato could be eyeing a big market as the COVID-19 pandemic has caused the world, as well as people in India, to place emphasis on preventive healthcare. With increasingly busy lifestyles, rising patient awareness, body image considerations, and pill fatigue, there has been a rise of the demand for nutraceuticals in India.

A study by Assocham and RNCOS estimated the nutraceuticals market in India could reach $8.5 billion by 2022 from $2.8 billion in 2015. Some of the brands that Zomato will compete with include TrueBasics, HealthKart, Wow Life Science, HealthVit, Himalaya, Inlife, and Biotrex, to name a few.

In February 2021, Info Edge had announced that its investee company Zomato had raised $250 million (over Rs 1,800 crore) in funding from Tiger Global, Kora, and others, valuing the online food ordering platform at $5.4 billion. Financially, Zomato’s FY20 revenue had jumped over two-fold to $394 million (around Rs 2,960 crore) from the previous fiscal, while its Earnings Before Interest, Taxes, Depreciation, and Amortisation (EBITDA) loss was at around Rs 2,200 crore in FY2019-20.

YourStory sent queries for more details about the launch of the product, which went unanswered at the time of the publishing of this story. We will update the story when we hear back from them.

How to Use Instagram Comments to Turn People Into Customers

Here’s what to expect on Day

The Secret to Creating Successful Hyper-Personalization in Banking