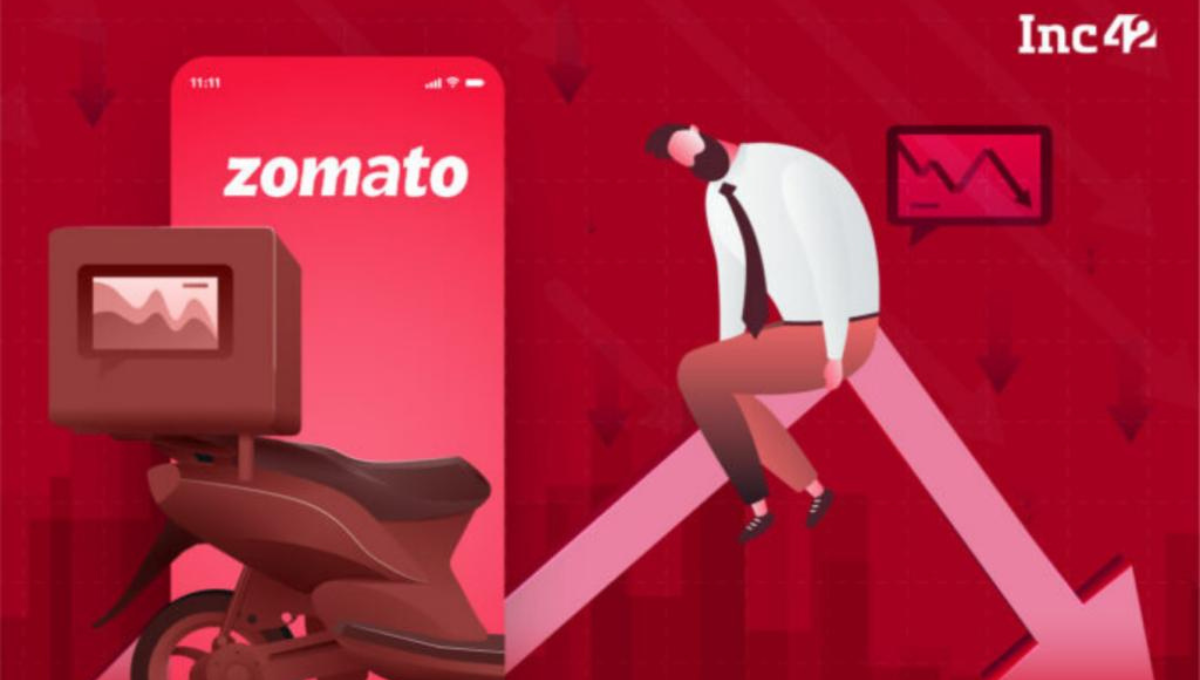 Zomato shares closed 6% lower on the BSE on Thursday to settle at INR 53.90

The decline in share price has wiped off over 12,000 Cr of investors’ wealth in the last four trading sessions

Shares of foodtech startup Zomato continued to slip for the fourth consecutive trading session, tanking nearly 6% on the BSE on Thursday (June 30) to settle at INR 53.90.

The decline in share price has wiped off over 12,000 Cr of investors’ wealth in the last four days. According to the BSE, the startup’s current market capitalisation stands at INR 42,439 Cr.

The Gurugram-based startup’s shares have been on a decline since the announcement of its INR 4,447 Cr acquisition of quick-commerce startup Blinkit.

Zomato shares have tanked more than 23% in the last four trading sessions, pointing to negative investor sentiment around the acquisition.

Market corrections had weighed on Zomato shares as they touched record-lows on the bourses in May. However, the shares started recovering in end-May and were on an upward spiral since then. However, the fortunes changed after the announcement of the deal.

Analysts earlier told Inc42 that while the deal adds long-term value to Zomato, many investors might not approve of adding another loss-making company to its portfolio and the deal might weigh on the stock in the short-term.

Zomato founder and CEO Deepinder Goyal had said that Blinkit’s business is synergistic with the foodtech startup’s core food business.

On the other hand, Kotak Institutional Equities Research downgraded the stock to ‘add’ from ‘buy’ on Wednesday, cutting its fair value estimate to INR 77 from INR 83.

From a record high of INR 169.10 in November last year, the shares have plummeted by more than 68% in the last seven months.

DigiLocker Is Now Available On WhatsApp Via MyGov Helpdesk