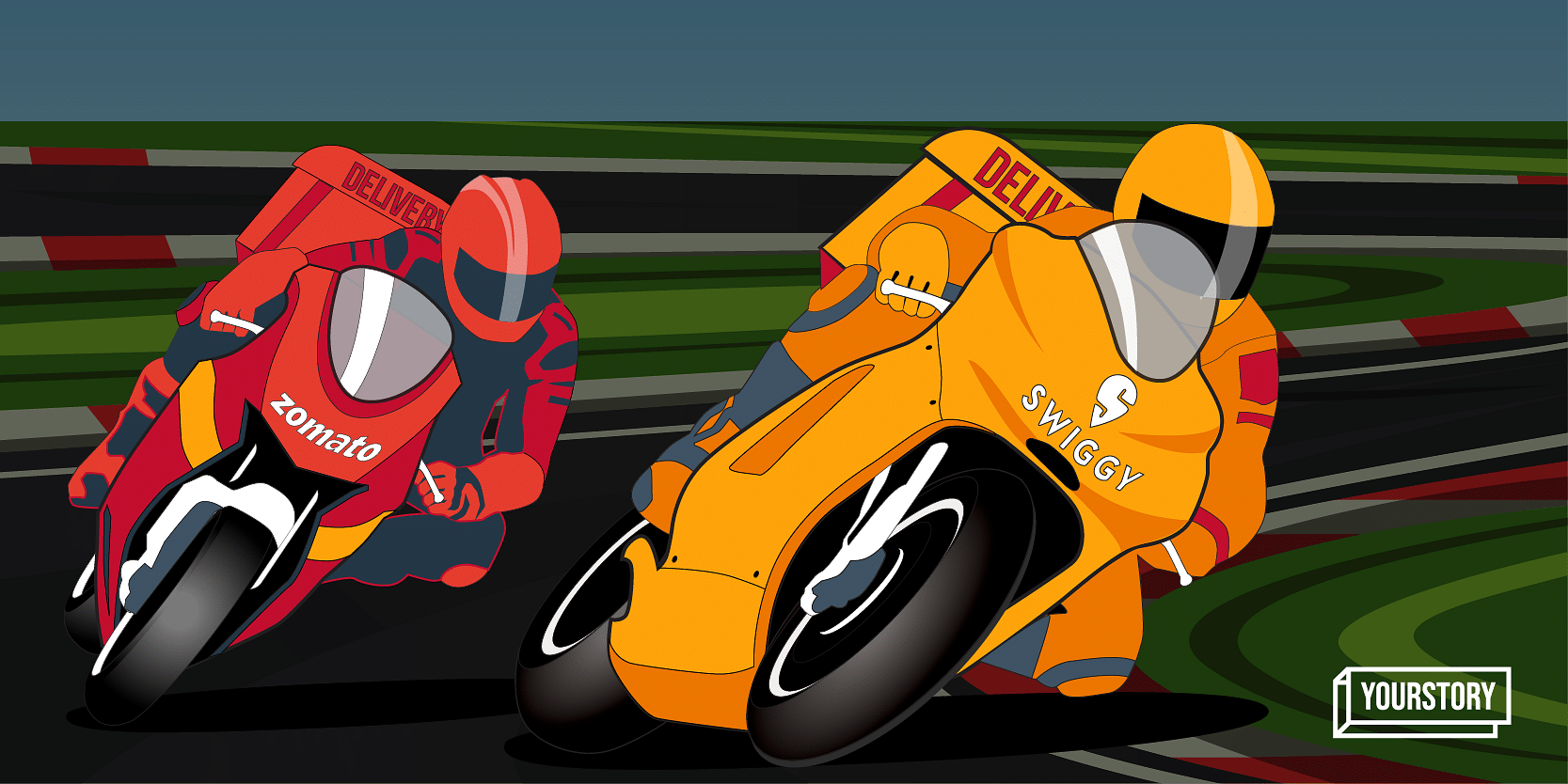 Until three years ago, it was easy to discern the startup-DNA of ﻿Zomato﻿ and ﻿Swiggy﻿, which have been competing in the foodtech space.

Zomato, founded in 2008 in the National Capital Region, had evolved from being a restaurants discovery and listings website to a food-delivery app with high brand-recall. It listed on stock exchanges in July 2021, and was oversubscribed by 44 times.

In contrast, Swiggy started in 2015 in Bengaluru. But from the get-go, it was a hyperlocal logistics platform that built a food-delivery business that would overtake Zomato’s top line in five years.

“We had to build a logistics company that utilised technology to create consumer delight,” recalled Sriharsha Majety, CEO of Bundl Technologies that runs Swiggy, in a SEED TO SCALE Podcast episode dated April 2018. “That was the genesis of Swiggy.”

Bundl Technologies began as a logistics aggregator, before the founders pivoted to build a food-delivery business with the brand name, Swiggy.

The first was Swiggy Stores, a marketplace for grocery and provisions shops to get discovered by customers on the Swiggy app. The second was a pickup-and-drop service, a la Dunzo. And, the third was a marketplace for meat shops.

Swiggy Stores didn’t work out, but was replaced by InstaMart in August 2020. This is Swiggy’s service to organise delivery of groceries and provisions, which has expanded to 28 cities. Genie, the pick-up and drop service, and Swiggy’s meat-shops marketplace have grown to 68 cities and 15 cities, respectively.

Has its diversification worked out? According to Sriharsha, at least 25 percent of Swiggy’s gross merchandise value (GMV) in November 2021 was from non-foods businesses. The remaining 75 percent is from commissions and advertising fees from restaurants.

Against this backdrop, Zomato has been making advances to buy out quick-commerce venture BlinkIt. The difference in DNA ceases to exist, as Zomato has morphed into a hyperlocal-logistics platform.

“Potential winners (in hyperlocal logistics) will need to be diversified across food, groceries and pharmaceuticals deliveries, and potentially ecommerce as well,” stated a HSBC Global Research report titled ‘Next Generation Logistics’ dated November 2021.

It called out Zomato’s delivery cost in FY21 at Rs 50 per order. “We and the Street expect it to decline to INR40 per order by FY26, largely driven by higher volumes,” the report said. Higher volumes would mean better targeting and grouping of orders, leading to lower delivery costs per order. “Growth in food-delivery orders and diversification into groceries and other areas should increase order grouping and reduce riders’ idle time,” it added.

The transformation from a foodtech venture to a logistics platform is evident in Zomato’s delivery charges, or the money earned from customers as delivery fees that Zomato passes through to its 316,000 delivery partners.

In absolute terms, Zomato’s delivery-related charges grew 3.5 times year on year to Rs 1,814 crore in FY22, and its outsourced support cost grew by 1.4 times to Rs 855 crore in the same period. (‘Outsourced support cost’ captures the availability fee that Zomato pays to its delivery partners.) Both these items are recorded as ‘other expenses’ in its profit and loss account.

For sure, Zomato is priming the market to value it as a hyperlocal delivery network that is diversifying. It announced its groceries pilot in Delhi in July 2021.

But as a logistics platform, Zomato is now essentially catching up with Swiggy–and needs BlinkIt to grow its GMV in the non-foods segments. In its first earnings call since the IPO on May 24, 2022, the Zomato management spent a considerable amount of time explaining its quick-commerce philosophy.

“Customer cohorts for quick-commerce businesses are very, very good,” Deepinder Goyal, CEO and Managing Director of Zomato, told equity analysts. “Some of these customer cohorts are better than the food business that we have.”

Akshant Goyal, CFO of Zomato, added: “We look at it as a broader commerce play. Grocery could be one of the categories that customers purchase on our platform.”

The quick-commerce model is based on a network of micro-warehouses (or, dark stores) managed by Zomato and BlinkIt. “While Zomato can hope to increase the bundling of orders per delivery-partner with quick commerce, the biggest problem in the category is wastage of fresh produce,” says a venture-capital investor in Mumbai, who requested anonymity.

Zomato has made a couple of advances in the past 10 months to deepen its interest in BlinkIt, the latest avatar of hyperlocal logistics startup Grofers. If reports of Grofers’ death have been exaggerated in the past five years, speculation around Zomato acquiring a reborn BlinkIt have been as rampant in the past two quarters. Grofers’ rebranding as BlinkIt is a quick-commerce play.

In March this year, in a disclosure to announce an investment in a food-robotics company called Mukunda Foods, Zomato slipped in a detail around BlinkIt: It wanted to extend a $150-million loan to Grofers India.

Inevitably, more than one equity analyst posed questions around BlinkIt during the earnings call in May. Sample Sachin Salgaonkar from Bank of America who queried Zomato’s management about the unit economics of quick commerce.

“It’s too early for us to give you colour on specific unit economics levers here, and how they’re trending,” Akshant told the analyst. “We don’t have that data, nor are we authorised to share the data with you right now because the only access we have to Blinkit data is as a shareholder.”

As a publicly-listed company, Zomato’s management expects investors to back its quick-commerce play. But if the BlinkIt acquisition is on, one thing is for sure: Zomato’s management will have to demonstrate a path to profitability after adding a loss-making BlinkIt.

Even as this plays out, in early June, Swiggy launched the pilot of a service called ‘Minis’ for direct-to-consumer brands in seven categories (personal care, electronics, home and decor, bakery, gourmet and organic, pet care, and jewellery) to be discovered by Swiggy customers.

While the Minis pilot is only in Bengaluru and Mumbai, Swiggy’s diversification continues to be organic.

When Swiggy piloted Genie, its intent was to utilise the idle time of its delivery partners between lunch and dinner orders.

With Quick Commerce (or, what began as an absurd promise to deliver goods in 10 minutes by the likes of Zepto), the rationale is to increase the bundling of orders for delivery-partners at the dark stores, which can translate into increased order-value for quick-commerce players. This is in theory.

This helps increase the utilisation of delivery partners, which is a large cost for Zomato and Swiggy. “There is also a higher margin from FMCG products, compared to the margins in the food-delivery business,” the investor adds.

The quick-commerce play requires BlinkIt and Swiggy to strike deals with FMCG companies like Unilever and P&G to optimise costs, and replace the distributors. This widens the gross margins profile.

“Finally, quick commerce gives players like Zomato or Swiggy the opportunity to monetise advertising on their platforms,” the investor says. “Remember, FMCG marketing budgets are many times higher than what the largest restaurants can muster.”

On the flip side, order sizes can be small in quick commerce, compared to customers who plan grocery-orders to make the most of bulk pricing.

Swiggy has run InstaMart for nearly two years. It’s unclear what impact its quick-commerce play has had on its net loss because its financial filings for FY22 are unavailable. It had reduced its net loss from Rs 3,920 crore in FY20 to Rs 1,617 crore in FY21.

An IPO-bound Zomato reduced its net loss by nearly three times from Rs 2,386 crore in FY20 to Rs 816 crore in FY21. But that climbed to Rs 1,222 crore in FY22, though it reduced burn in food-delivery for three quarters in a row during the fiscal year.

“As long as our food delivery business is increasingly becoming profitable, and we are allocating a reasonable budget for our foray into quick commerce as and when we do it, a few quarters of here and there in terms of getting to EBITDA breakeven at a group level is fine,” Akshant told equity analysts in May 2022.

In reply to a question on taking Zomato to an EBITDA-neutral business on the core food (excluding the hyperlocal plans), Deepinder said, “We don’t have any timelines for this. We are actually operating on an as-soon-as possible mode.”

But Zomato is underestimating the competitive landscape if it acquires BlinkIt to wage its quick-commerce battle. Its problem won’t just be Swiggy, which is backed by Prosus (erstwhile Naspers). It has to also factor in Reliance JioMart, which has the Reliance Retail supply chain, apart from a minority stake in hyperlocal delivery platform Dunzo.

JioMart has the balance-sheet size to compete in quick commerce for long periods of time. For Swiggy, its organic diversification, and being a private company stand it in good stead. But for Zomato, its diversification will play out in the public eye quarter after quarter.

How embedded finance can democratise the fintech/digital lending segment?

VCs gung-ho about embedded finance startups, but a word of caution

From the latest tech on display to engaging the Indian startup ecosystem, here is what’s in store at the Rajasthan DigiFest 2022