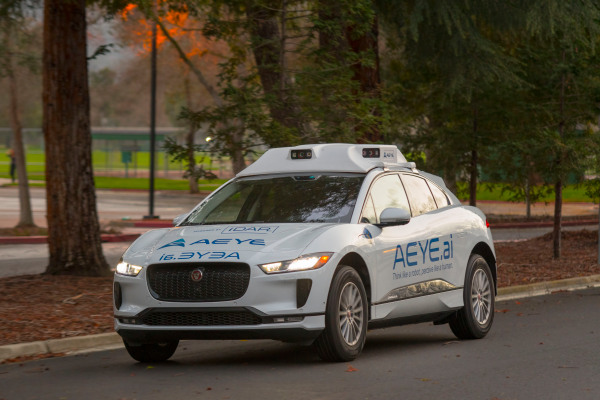 AEye, a lidar startup that developed its technology for use in autonomous vehicles as well as to support advanced driver assistance systems in passenger cars, is going public through a merger with CF Finance Acquisition Corp. III that will value the company at $2 billion.

The agreement marks the latest lidar company to turn to so-called blank check companies or SPACs in lieu of a traditional IPO process. Velodyne Lidar kicked off the trend last summer when it announced that it planned to go public through a merger with special purpose acquisition company Graf Industrial Corp., with a market value of $1.8 billion. Others soon followed, including Luminar, Aeva, Ouster and Innoviz.

Under this deal, AEye said it was able to raise $225 million in private investment in public equity, or PIPE, from institutional and strategic investors that include GM Ventures, Subaru-SBI, Intel Capital, Hella Ventures and Taiwania Capital. Other undisclosed investors also participated. Through the transaction, AEye will have about $455 million in cash on its balance sheet, proceeds that include $230 million in trust from CF Finance Acquisition Corp. III, a SPAC sponsored by Cantor Fitzgerald.

Lidar, light detection and ranging radar, measures distance using laser light to generate a highly accurate 3D map of the world around the car. The sensor is considered by many in the emerging automated driving industry as a critical and necessary tool. Velodyne long dominated the lidar industry and supplied most AV developers with its products. Dozens of startups have popped up in the past several years aiming to carve away market share from Velodyne, each one pitching its own variation on the technology and business approach.

In the past three years, lidar companies have tweaked their business models as the timeline to commercialize autonomous vehicles dragged on. Startups began to emphasize their perception software or pitched to automakers that the sensors could — and should — be applied to passenger vehicles to provide redundancy and push the capabilities of driver assistance systems.

AEye is one of several lidar companies that have expanded its focus beyond autonomous vehicles. The company said the capital raised by going public will be used to scale the company in key markets. AEye’s pitch is that the company’s lidar technology along with its partnerships with Tier 1 and Tier 2 suppliers like Continental makes it well-positioned to scale and to be adopted by major automakers. AEye’s lidar sensor scans the surroundings and then, with help from its perception software, identifies and focuses on relevant objects.

Automotive, specifically to support ADAS in passenger vehicles and in the long-term within autonomous vehicles, is AEye’s foundational market. But the company sees wider industrial and mobility applications in mining, trucking, traffic systems, aviation and drones.

“At the right price and reliability, we believe lidar will eventually be in everything that has a camera today,” CEO Blair LaCorte said during an investor presentation. “With expectations for broad adoption of lidar for consumer and industrial applications, we forecast a total addressable market of $42 billion by 2030.”

AEye is at the earliest stages of that total addressable market. The company said it expects to generate $4 million in revenue in 2021 and a net loss (EBITDA) of $59 million. AEye said commercial production of its sensors are expected in the fourth quarter of 2021, which will help increase revenue to a forecast $13 million in 2022. By 2024, AEye forecasts $175 million in revenue and says it will be positive EBITDA by the second half of the year.

The combined company will be called AEye Holdings Inc. and is expected to be publicly listed on Nasdaq. The transaction is expected to close in the second quarter of 2021. The management team, which includes Blair LaCorte as CEO, founder Luis Dussan as CTO and Bob Brown as CFO, will remain.

IndiaTech Urges MeitY To Come Up With Code For Online Gaming

What Are the Best Franchises to Invest In?

Personality vs Profit: You Can Have Both When You Recruit Right