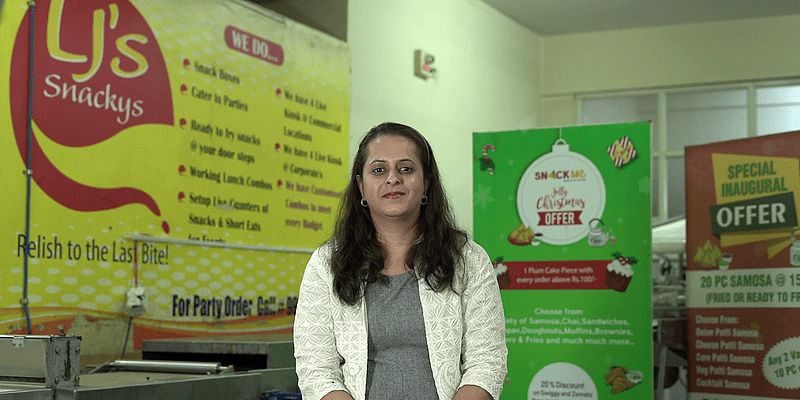 A Sindhi by birth, a Indian at heart and a foodie by DNA — that’s how Anushka Jaisinghani describes herself. So, it wasn’t surprising,that when she decided to turn into an entrepreneur after a decade-long corporate stint, food was the first segment which she wanted to venture into. “Sindhi cuisine has a lot of snacks which are slightly different from the ordinary. And, most of these snacks have evolved to meet the palate of the modern consumer. We have patti samosa, cheese rolls and aloo tikkis, among others. It was something that I knew would do well in a cosmopolitan market like Bengaluru,” she says.

Given that it is the small streetside stalls that consumers first look for snacks, Anushka started LJs Snackys in December 2009 as a small kiosk near a supermarket. “We began with five varieties of ready-to-fry snacks. In about eight months, we got popular and I set up a backend unit in a 300-sq ft garage space with four employees including myself,” shares Anushka. But, given that weekends brought most customers to the kiosk, Anushka tapping into corporate orders to make the business venture profitable. The move brought with it an opportunity to open a snack cafe in a corporate cafeteria.”We ventured into corporate catering in 2012 and went on to serve some of the biggest companies like NetApp and Capgemini.”

The next few years saw LJs Snackys growing at a steady pace. In 2013, the business was being powered by a 50-member staff which included professional chefs operating from a 2000-sq ft production unit. The next year, the business ventured into contract manufacturing for Bengaluru-based local popular food joint brands like Hatti Kaapi and Juice Junction. By 2016, the business had grown to warrant a manufacturing facility. “We set up a 5000 sq ft semi-automated unit to manufacture all varieties of snacks. It was complete with in-house baking solutions, salad bar offerings, continental snacks, south Indian snacks, fast food and all types of finger foods. We wanted to cater to the corporate employees as well. By 2018, the business was manufacturing 700kgs of snacks on a daily basis, scaling up to 1 tonne during festive seasons.

However, the biggest milestone for Anushka was setting up a small dedicated team of women for manufacturing frozen ready-to-cook snacks for the B2B segment. “When I started as an entrepreneur, I wanted to upskill people from lower socio-economic strata and provide them with viable employment that would help them come out of the vicious cycle of poverty. A key segment, I was keen on reaching out to these women, especially mothers by providing a flexi-working environment. The all-women team was a culmination of that dream,” she says. In 2019, LJs Snackys launched its B2C brand ‘Snack Me’ – frozen ready-to-cook snack range . In 2020, when her corporate catering and the B2B business came to standstill due to the COVID-19 pandemic, it was ‘SnackMe’ that helped her business stay afloat.

Anushka says, “With a major portion of the sales being affected by the pandemic, we needed to think what we could do differently to restore the business. And, we saw the opportunity in the frozen food segment was tremendous. So, we intensified our efforts to add more varieties to the frozen snack segment that prided itself on being preservative-free yet offering a shelf life of 150 days. We also worked towards building a distributor network.” Today, the business manufactures 500 kgs of frozen snacks a day.

Anushka says she is keen on growing the B2C arm of the business by building a sustainable model for snack manufacturing and distribution while also working towards rejuvenation of its B2B arm given that corporates are now slowly returning to offices.

It is here that Anushka believes that her selection into the Xcelerator Bangalore programme could be fruitful. “One of the key highlights of the programme for me as an entrepreneur is how it looks to bring together an ecosystem with active involvement from different stakeholders — financial institutions, academic institutions, industry associations — as well bring in the support networks who can advise her on taxation, financial, political and legal issues. This will be vital in helping me build marketing strategies as I look to expand my geographic footprint and also to avail more finances and manufacturing technology support to achieve mass production and standardisation.”

In addition to its plan to grow the business, Anushka is looking towards setting up a well integrated network of women from poor socio-economic backgrounds and offer them opportunities to become microentrepreneurs. “A co-operative society for distribution of frozen food, that’s a dream that I am hoping to achieve,” says Anushka while signing off.

Xcelerator Bangalore aims at accelerating the growth of women-owned businesses in Bengaluru and provide support to growth-oriented women entrepreneurs across sectors and support them to learn, collaborate and network with various stakeholders through a multitude of workshops, learning and mentoring sessions. This series highlights the work of 24 women entrepreneurs who will be participating in the first cohort of the Xcelerator Bangalore programme.

Armed with grit, these non-profit entrepreneurs are changing lives one idea at a time

Why You Should Look after Your Archives –