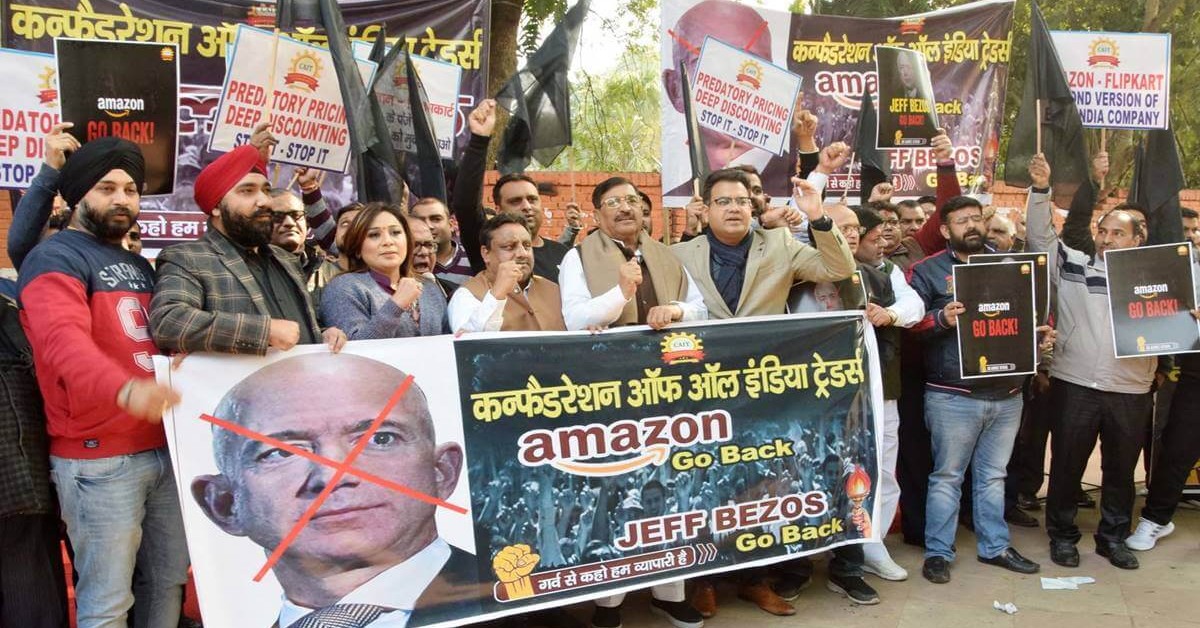 The Confederation of All India Traders (CAIT) has called for a ban on Amazon, claiming that the findings of the report this week

What was perhaps known all along, owing to several parties alleging the same in their complaints to Indian regulatory authorities, has now been laid bare from the suspect’s internal diaries. A lot had already been written about Amazon India’s anti-competitive practices to gain a leg up in the market, and how its increasing hold over Indian ecommerce was putting the livelihoods of brick and mortar retail store owners in jeopardy. A recent Reuters report appears to have substantiated all these claims.

Several of these claims had been made by sellers association, the Confederation of All India Traders (CAIT), which has called for a ban on Amazon, claiming that the findings of the Reuters report are reason enough to bar the US-based ecommerce giant from conducting its operations in the country.

The Reuters report comes just a few days after Amazon had announced that it will commence the manufacturing of electronics products such as its FireTV stick in India, a move celebrated by the top-most ministers of the Indian government on Twitter.

Things are set to get more complicated for Amazon after years of protests from CAIT and other allied bodies. Even union commerce minister Piyush Goyal had admonished the company’s investments in the Indian market last year in the face of rampant losses, calling Amazon harmful to India’s job market.

From Amazon preferencing seller entities such as Cloudtail and Appario in whom it indirectly holds a stake, to the retail giant constantly looking to work around India’s foreign direct investment (FDI) and ecommerce regulations with ignoble manoeuvres, the report details all that was shadowed in Amazon’s nearly eight-year-long stint in India, since it launched its Amazon.in web portal to service customers here.

“The shocking revelations in the Reuters story are sufficient enough to immediately ban operations of Amazon in India,” CAIT said in a statement.

The group called on commerce minister Goyal to take immediate note of this “important and burning issue and order for a ban on operations of Amazon in India.”

“It’s an open and shut case that Amazon is willfully playing with rules. What more we are waiting for. It should be banned in India with immediate effect,” wrote Praveen Khandelwal, the secretary-general of CAIT on Twitter.

The Reuters report talks about Cloudtail and Appario, two seller entities in which Amazon has indirect stakes. By preferencing these sellers with discounted fees, also helping them ink partnerships for exclusive sale of products with global brands such as Apple and Microsoft among others, Amazon immensely hurt the business prospects of Indian retailers.

Notably, while in the US Amazon can engage in the sale of goods directly to consumers, in India, it is only allowed to act as a facilitator, where its portal can work connect buyers and sellers. The company earns a commission from sellers who list their products on Amazon, in turn, helping them with associated services such as inventory management and delivery of goods to customers.

The report says that two sellers in which Amazon has been accused of having indirect stakes made up around 35% of the platform’s revenue through sales in 2019. This indicates just how critical these ‘internal’ sellers are to Amazon’s India business.

The findings of the report have proven to be a shot in the arm for numerous Indian sellers’ associations such as CAIT, the Delhi Vyapar Mahasangh (DVM) and the All India Online Vendors Association (AIOVA). The Competition Commission of India (CCI), India’s antitrust regulator, also initiated a probe into Amazon’s anticompetitive practices last year.

The probe is currently on hold after a challenge by Amazon and Flipkart, the other major ecommerce platform in the country.

The Startup Magazine Are Routine Drug Tests Still Needed in the Workplace?

Zomato Shuts Down South African Operation After UK & US Subsidiaries

IntrCity on the journey to make travel comfortable