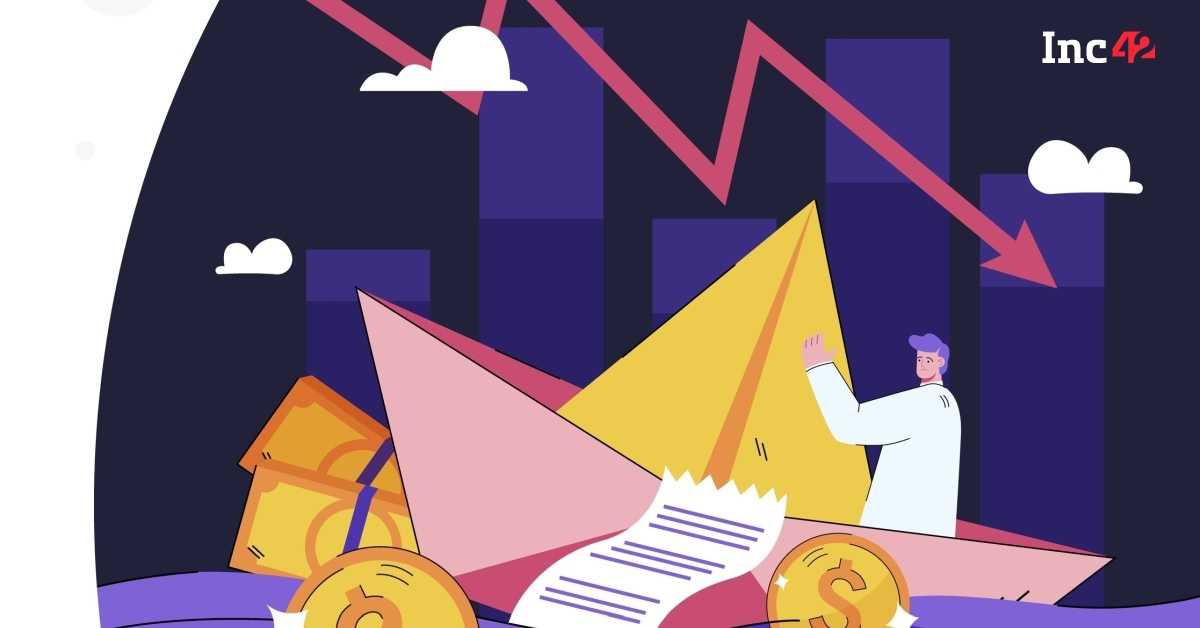 There’s been no shortage of bad news this week, with the invasion of Ukraine by Russia pretty much attracting everybody’s attention. Fears of another prolonged war have spooked VCs and startup investors in India and globally further after the steep sell-off in December and January, which had already wiped off billions in market cap for tech companies.

Before we dive into the signs of a bear market, here are two stories that deserve your attention too:

🕹️ Game On! While the gaming industry has one eye on regulation and legal clarity, the ecosystem has welcomed the Karnataka HC verdict overturning the state’s ban on online games

🪙 Disclaimers For Crypto: The Advertising Standards Council of India (ASCI) has published a set of guidelines for crypto and NFT ads, which will go into effect from April 1

🎢 Shaky Times Ahead For Startups

The Ukraine-Russia situation has brought on stronger recessionary feelings even as the market was moving towards a correction that was expected in startup funding. This will be particularly hard on late-stage startups that have not managed to bring in profits.

But it has also pushed many growth stage startups to either shut down or look for buyers as investors seek deals with better values after record-breaking investments in 2021.

There are many symptoms to the larger malaise of bearish investment climate. Layoffs, like a fever, are often the first sign that things are about to go awry.

It started with edtech startup Lido, where about 150 employees were laid off this past week. The Ronnie Screwvala-backed edtech startup had raised $10 Mn only a few months ago in September 2021. But now six months later, it has failed to secure a follow-on round leading to heavy layoffs largely from the sales team. Sources told Inc42 that the startup is now looking for an acquisition to steady the rocking ship.

Then Bengaluru-based bookkeeping startup OkCredit also laid off dozens of employees this week. Sources informed us that the Tiger Global-backed startup has laid off around 30-40 employees, which the startup claimed are being supported by outplacement services and extended medical insurance. In FY21, the startup spent INR 114.6 Cr but only earned INR 3.79 Lakh in revenue from sales.

Of course, layoffs are part and parcel of the startup ecosystem. Companies lay off employees as they look to course-correct or when they want to shut down particular verticals. This seems to be the case for OkCredit, but it remains to be seen how the future will pan out for Lido’s employees, who have already gone without pay for many months. Just like in the early days of the pandemic, employees are the first ones to be impacted when business or funding slows down.

Speaking of firings, BharatPe has confirmed this week that it has indeed sacked Madhuri Jain Grover, wife of cofounder Ashneer Grover and the head of controls at the company. Previously, Jain Grover had alleged that the BharatPe board had accepted her resignation, even when one was not furnished. She had claimed that the board assumed that she had resigned based on a stray statement by Ashneer Grover, even though she had only offered to go on a leave of absence.

That didn’t stop the mudslinging this week as Jain Grover lashed out on Twitter. It’s all a bit too crass if you ask us.

But this whole incident has brought to light another major problem that some early-stage founders might face in these coming months. As VCs and investors turn pickier, they will demand more than their pound of flesh from startup founders.

We won’t be surprised to see more situations where founders lose their equity and say in the business as the market shifts to the investor’s advantage. Seller beware.

While startups that are struggling to find growth will obviously not find many investors, the problem right now is that large VCs have turned their focus to either sunrise sectors, where they are finding better deals (read: large stakes for a bargain) or to the public markets, where tech stocks have taken a beating and are available for cheaper than ever before (more on this later).

While Tiger Global invested in several unicorn rounds last year, this year, it is focussing largely on early-stage deals and public market value bets. According to a report in The Information, the storied hedge fund said earlier this month that it will no longer focus on late-stage companies in pre-IPO rounds. These tech companies, which typically haven’t found a path to profitability, are risky deals for Tiger. Instead, it will focus on investing in early-stage and growth-stage Series A and B rounds.

Plus, the fact that tech stocks have sunk in value makes them good bets. So VC funds with a mixed market focus have turned to buying the dip. Now of course, Tiger Global might take a different view of the Indian market in particular, but where the big investors go, many of the smaller VCs follow. One might see the same in the Indian market too, given that late stage startups are answering a lot of questions about their ballooning valuations. Startups that are not able to maintain leverage over investors through growth will succumb to down rounds.

Earlier this month, Pharmeasy was said to be mulling a readjusted valuation ahead of its IPO, which has got the SEBI nod. The healthtech company’s shares were trading at INR 70-80 on the unlisted securities market, roughly half of what it was trading for in November last year. It may go for a $7 Bn valuation in its IPO, a big drop from the earlier $10 Bn.

Even SEBI has an eye on valuations of startups going for IPOs. As reported by us this week, a SEBI committee has recommended that the draft red herring prospectuses of startup IPOs explain the key performance indicators that form the basis for the issue price and the valuation. This is expected to help investors judge whether the valuation is justified or not, because many retail investors are wary of how tech stocks have been valued given their performance.

Things have been relatively sombre for listed Indian tech companies too this past week, even though the overall stock market performance was not as dismal as many expected given the situation in Europe. The inclusion of Paytm and Nykaa in the Nifty Next 50 Index notwithstanding, it was not a good week for new-age tech companies with a couple of exceptions. 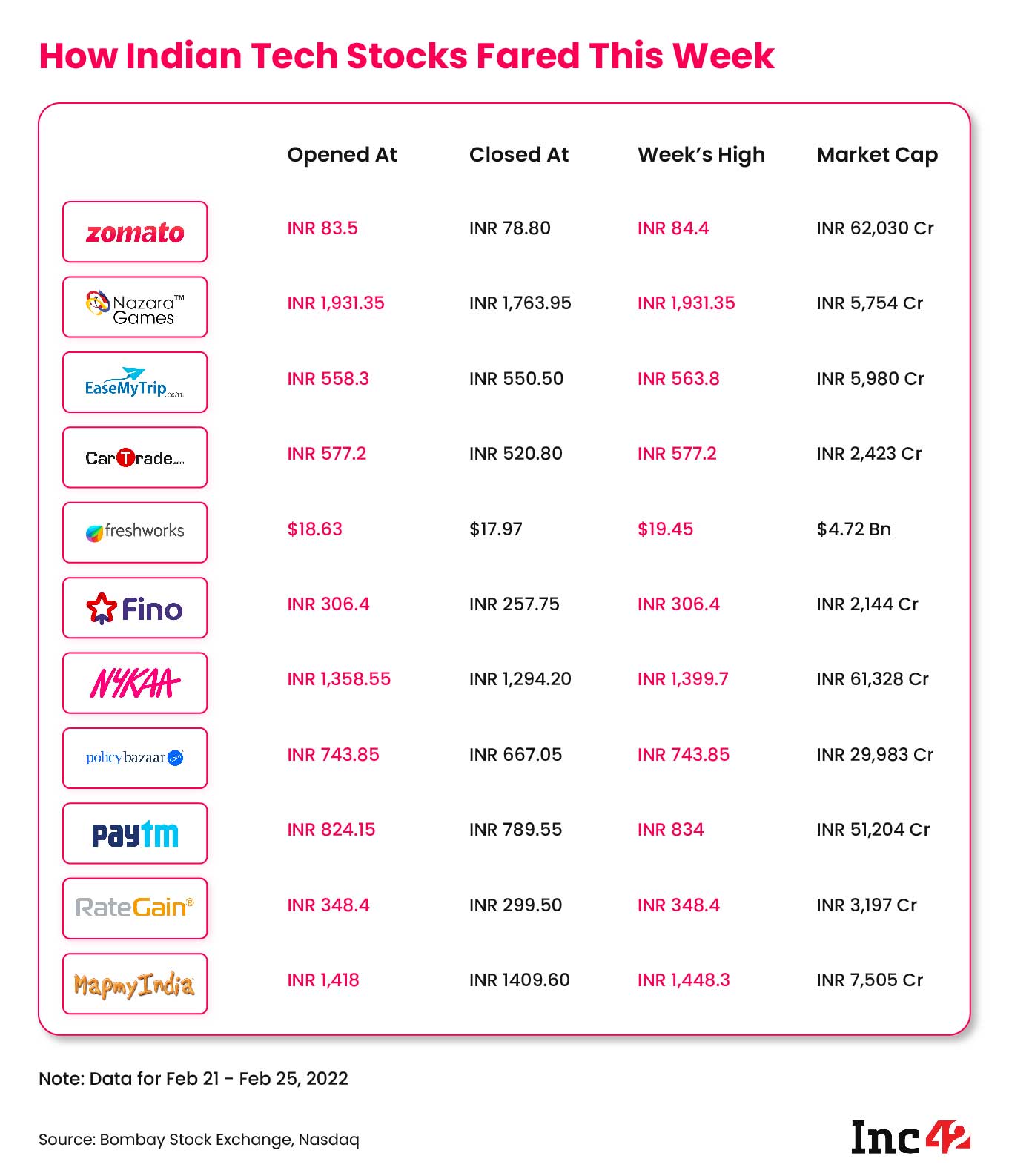 Similarly, Nykaa closed 5% lower than it opened at INR 1,294, and has gone from its all-time high of INR 2,574, to almost half of that in a matter of months.

On the other hand, EaseMyTrip saw a healthy week too and finished the week on INR 550.50, just 1.5% below its opening price on Monday, and the stock surged by nearly 10% on Friday while the overall NSE index grew by 2.5%.

While many of the large startups have failed to impress, investors would want to buy these dips in the hope that at least some of these companies will finally capitalise on their scale to bring in profits and offer long-term gains.

🦄 Two New Unicorns: The past week saw the rise of two new unicorns in the form of GraphQL developer platform Hasura and fintech startups Perfios

💰 Overall, startups raised a total of $699 Mn of investment across 48 deals. The busiest investors of this week were A91 Partners, Bessemer Venture Partners, Kalaari Capital, Omidyar Network, and Lightspeed Venture Partners who all signed two deals each. 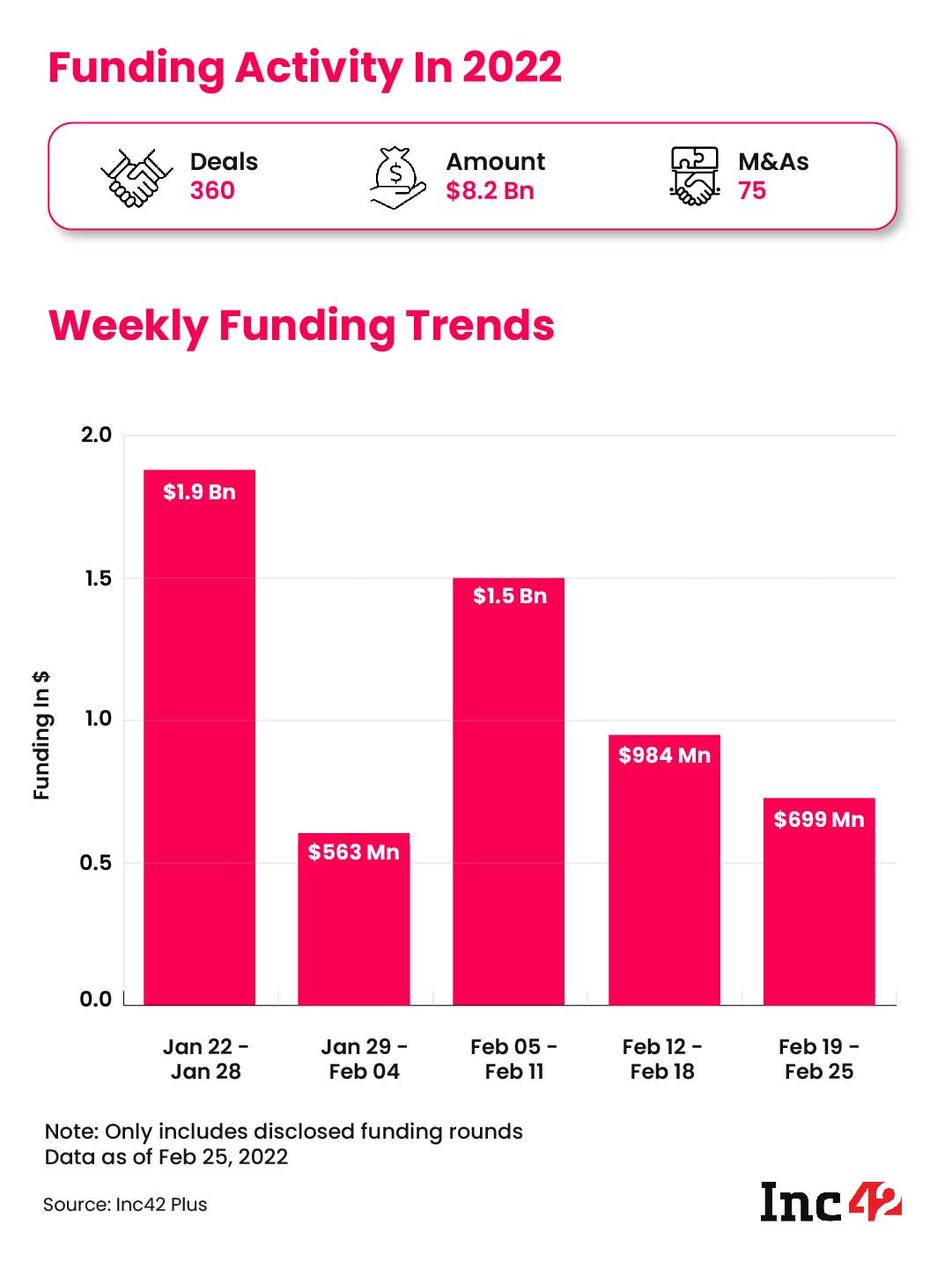 That’s it for this Sunday. Have a great week ahead!

5 Tips For A Post-Pandemic Business Model

7 Factors to Consider When Investing in Startups