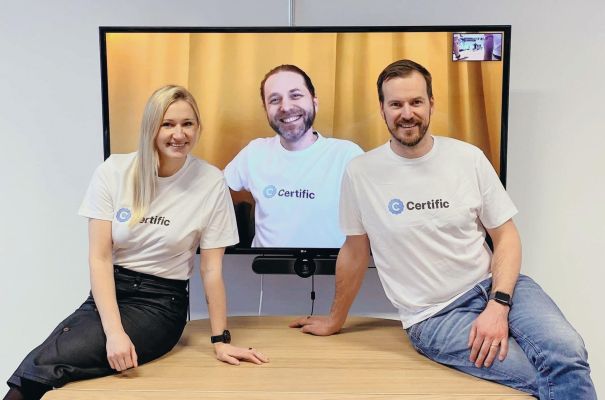 Certific, a health tech startup co-founded by TransferWise’s Taavet Hinrikus, is breaking cover today with the launch of what it claims is the first “certified” remote COVID-19 testing service.

The British-Estonian company is using techniques borrowed from the worlds of fintech and telemedicine, including asking users to film themselves while taking the at-home test, in a bold attempt to solve remote testing’s adherence and trust problem.

Initially targeting private individuals and businesses in the U.K., with other markets to follow, tests can be ordered online and are carried out remotely with the promise of a certified result the following day for PCR tests and in under 90 minutes for antigen tests.

More broadly, the Certific app and user journey is designed to increase trust in remote testing and ensure that self-performed tests reach the same standard as those carried out in a clinical setting.

“When the pandemic hit, we started toying around with the first finger prick tests to see if you have antibodies, and thinking, ‘hey, is there a way to make use of these to help the world along,’ ” Hinrikus told me during an interview earlier this week. “[But] then it turned out that these kind of antibody tests, and the end immunity, was a very unclear concept. And so we kind of put it on hold, but we kept on thinking about what better things we can do to make testing more trustworthy and easier”.

Then late last year he and Certific’s other co-founders — physician Dr. Jack Kreindler and CEO Liis Narusk — realised that there were things “that we can and should be doing to come up with a more democratised way of medical testing, and apply this to the pandemic”.

Hinrikus doesn’t quite say it, but as the founder of TransferWise and a prolific angel investor, including backing Estonian verification platform Veriff, there’s little doubt that Certific is partly inspired by the authentication techniques that have gained prominence in fintech, such as video selfies used to onboard new customers at digital banks. In addition, medical director Kreindler has experience with anti-doping in close-combat sports.

Coupled with more traditional identity checks, the Certific app asks you to film yourself while you take the test. The recording and test result is securely uploaded to Certific and checked by a qualified physician to ensure you have adhered to the manufacturer’s instructions properly. A medical certification containing the test result is then delivered back to the app. PCR tests cost £64, and the soon to be available rapid antigen tests will be sold in 12-packs for £249 (making the price of a single antigen test £20.75).

But how easy would it be to cheat the test and therefore fake a result? “That’s one thing we definitely are very, very focused on solving,” says Certific CEO Narusk. “Our experience in all the anti-fraud and anti-cheat areas means that we went far and beyond to make sure that you can’t actually tamper with the process. So when you record the video, and after you have recorded the video, it is checked by our test verification officers who make sure that you haven’t moved the tests away from the screen”.

In addition, Certific ensures that the test you have used is actually the test that you ordered and contains the same unique ID, and that you are the person who was supposed to do the test.

That in itself isn’t entirely fraud proof, and Hinrikus clarifies that Certific is initially focusing on ensuring that a test is carried out medically correctly. He says that a higher-priced tier will be offered at a later stage with enhanced video verification, such as a live operator acting as a witness.

This could be particularly useful for businesses, such as live events or travel, where there could be incentives for individuals to cheat and where operators may be required to prove to insurance companies or government authorities that they are COVID-19 safe.

Kreindler, Certific’s medical director, contrasts this with key workers that are currently permitted by U.K. authorities to carry out coronavirus home-testing without any additional verification, but who aren’t nearly as likely to want to fake a result.

“If you think about it, those public servants are not at a great disadvantage if they test positive, because they still get paid. So there’s less of an incentive to cheat. And the challenge comes where you are doing point of care testing in an environment where there actually is some incentive or a big disadvantage [to testing positive]”.

Kreindler also says it’s not just about individuals and that Certific has worked with academics in Estonia, North America and in the U.K. to develop a computational risk model for mass testing for “super spreader” environments, such as large events. People will not only be able to take a test at home before attending, but a risk model that continually learns and takes into account “democratised decentralised testing” and an understanding of vaccination and immunity, could enable further mitigations to be put in place to make sure there’s no net spread of the virus back into the community. “That’s very core to our thinking going forward,” he says. “It’s not just about certifying testing, it’s also about certifying crowds”.

Zooming out even further — and beyond the current coronavirus pandemic — Certific has been built to be entirely test agnostic. Combining speed, convenience, adherence and trust, the company aims to be the rails on which existing and future home tests can run (my words, not theirs). In the future, this could span testing for sexually transmitted diseases (SDIs) to anti-doping tests in sports. And, of course, new types of COVID-19 tests as they come on stream.

After its Spain entry, bunq collaborates with Paysafe to provide customers with access to cash services

Meet your co-founder or find your next gig at TC Sessions: Mobility 2022 – TechCrunch

Did we learn anything from the Elon-Twitter brouhaha? – TechCrunch