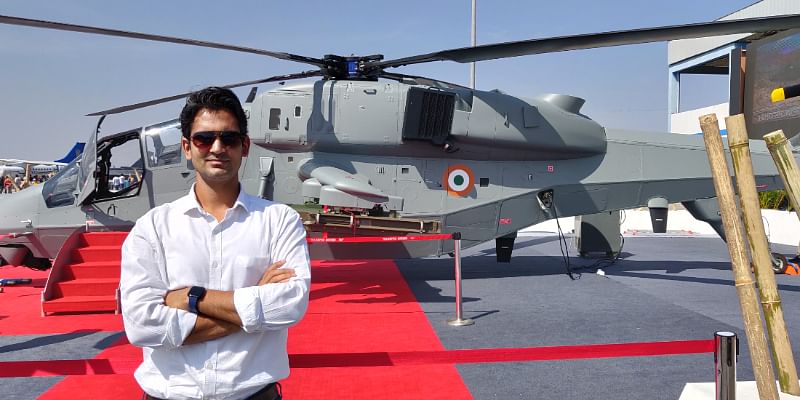 Former ISRO engineer turned entrepreneur Dhinesh Kanagaraj was always interested in the field of composite materials.’ During his three-year stint with the national space organisation, he was also pursuing and ideating along similar lines.

A graduate of IIT-Madras, Dhinesh, and IIT-Delhi alumnus Abhijeet Rathore met in ISRO in 2011, and worked on popular missions such as GSLV Mk-III and Chandrayaan-II. After leaving his job at ISRO, Dhinesh along with his colleague Abhijeet launched Chennai-based Fabheads Automation in 2015 for building automated solutions for fabricating composite products.

They were joined by Akshay Ballal from BIT-Mesra, who started as an intern at Fabheads straight out of college, but later continued in the organisation full time, and is now the Chief Product Officer.

Carbon fibre materials are mostly used across high performance industries such as drones, shipping, racing, biomedical, aerospace, and defense among others. Akshay explains that carbon fibre is known for being light as plastic but strong as steel.

The startup is mainly focusing on the aerospace, automobile, and biomedical sectors. “Our major clients are industries involved in high performance manufacturing, such as aerospace, defence, drones and EVs among others. Further, our clients include entities like schools, colleges, maker spaces and other startups who want 3D printing capability with materials like carbon fibre,” Akshay says.

He adds that Fabheads is currently providing 3D printing technology as a service to its clients. Now the company is also looking to launch the printers in the market for sale.

Three versions have been developed by Fabheads – FibrBot 300S, FibrBot 300 and FibrBot 1K – in the series being launched in the market for sale.

“About 80 percent of our client base today is from the drone sector, where we cater to carbon fibre airframe fabrication requirements to several drone OEMs. We usually enter a joint development program with our drone clients where we assist them through the development phase till mass production, and thereby have year long engagements with most of our clients,” Akshay says.

For a company that began its journey with a small group of interns, Fabheads now has 18 full time team members.

Fabheads offers fabrication services directly to its clients including Dell, The ePlane Company, Tunga Systems, and Synergy Marine among many others. The startup also won a defense development project for the Indian Air Force via iDEX program, an initiative launched by PM Modi to achieve self-reliance and foster innovation and technology development in Defence and Aerospace by engaging MSMEs, startups and other organisations.

As a part of this, the deep tech startup will be designing and developing carbon fiber helicopter blades for the Indian Air Force. Almost 50 percent of all IAF helicopters use metal blades which need to be replaced after 2000 hours. These blades are mostly imported, resulting in high maintenance cost.

However, according to Fabheads’ claim, the blades being developed by them will be designed to offer a minimum of 8000 hours lifetime, reducing the maintenance cost by at least 30 percent.

“Our innovation lies in the machines we make. We sell these in smaller configurations to organisations that want 3D printing capability for materials like carbon fibre in-house. But we retain the larger machines in-house to cater to fabrication services directly. For customised high volume niche products, we offer a licensing model, where we develop a custom production line using our machines,” Akshay explains.

According to the company, Fabheads is Asia’s first and only Carbon Fiber 3D printer maker. Poland-based Dexcraft provides similar services, as it designs and manufactures high-performance carbon fibre products for the automotive, medical, military industry among many others.

Incubated at IIT-Madras Incubation Cell, the startup raised $500K in its seed fund from Keiretsu-Chennai Chapter, and investor Vijay Kedia in 2018. Fabheads is currently in the process of raising the next round of funds.

“We aim to expand internationally in the US and Europe in the next two years. We will be launching several variants of our products in the coming years, as per industry requirements,” the co-founder adds.

This edtech startup focuses on the learner-centered paradigm of education

Aug 1st week sees over $1B inflow of funds

These 5 deep tech startups have become hot targets for investors