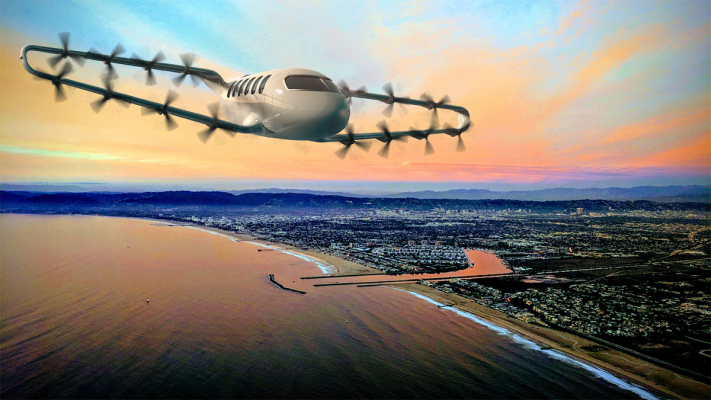 Air taxis may still be pie in the sky, but there’s more than one way to move the air travel industry forward. Craft Aerospace aims to do so with a totally new vertical-takeoff and landing aircraft that it believes could make city-to-city hops simpler, faster, cheaper, and greener.

The aircraft — which to be clear is still in small scale prototype form — uses a new VTOL technique that redirects the flow of air from its engines using flaps rather than turning them (like the well-known, infamously unstable Osprey), making for a much more robust and controllable experience.

Co-founder James Dorris believes that this fast, stable VTOL craft is the key that unlocks a new kind of local air travel, eschewing major airports for minor ones or even heliports. Anyone that’s ever had to take a flight that lasts under an hour knows that three times longer is spent in security lines, gate walks, and of course in getting to and from these necessarily distant major airports.

“We’re not talking about flying wealthy people to the mall — there are major inefficiencies in major corridors,” Dorris told TC. “The key to shortening that delay is picking people up in cities, and dropping them off in cities. So for these short hops we need to combine the advantages of fixed wing aircraft and VTOL.”

The technique they arrived at is what’s called a “blown wing” or “deflected slipstream.” It looks a bit like something you’d see on the cover of a vintage science fiction rag, but the unusual geometry and numerous rotors serve a purpose.

The basic principle of a blown wing has been explored before now but never done on a production aircraft. You simply place a set of (obviously extremely robust) flaps directly behind the thrust, where they can be tilted down and into the exhaust stream, directing the airflow downwards. This causes the craft to rise upwards and forwards, and as it gets enough altitude it can retract the flaps, letting the engines operate normally and driving the craft forwards to produce ordinary lift. 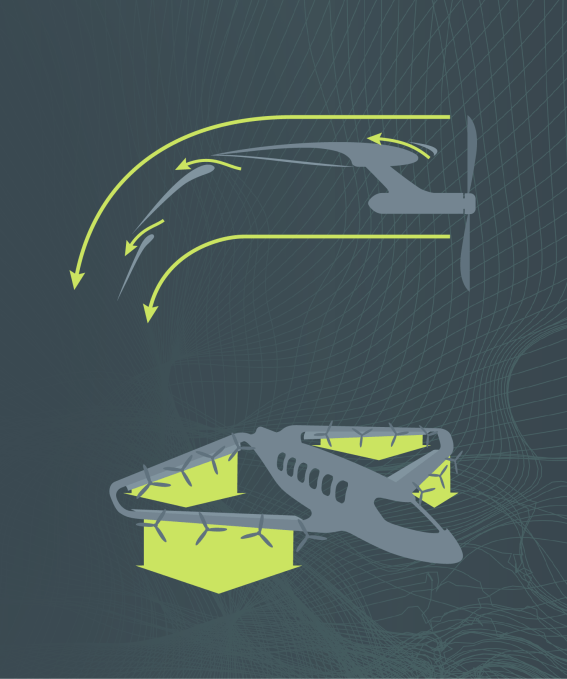 During takeoff, thrust is redirected downwards by extending flaps.

The many rotors are there for redundancy and so that the thrust can be minutely adjusted on each of the four “half-wiings.” The shape, called a box wing, is also something that has been tried in limited fashion (there are drones with it, for example) but ultimately never proved a valid alternative to a traditional swept wing. But Dorris and Craft believe it has powerful advantages in this case, allowing for a much more stable, adjustable takeoff and landing than the two-engine Osprey. (Or indeed many proposed or prototype tilt-rotor aircraft out there.) 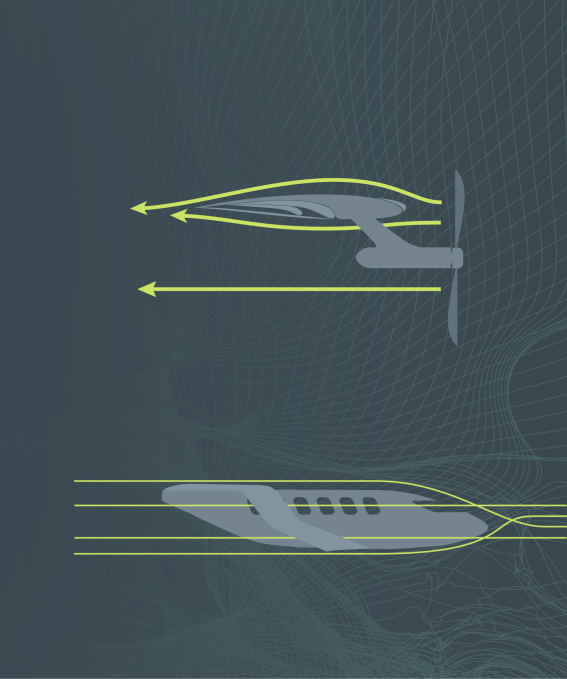 During flight, the flaps retract and thrust pushes the plane forward as normal.

Again, to be clear, the company has demonstrated a limited scale model that shows the principle is sound — they’re not claiming there’s a full-scale craft ready to go. That’s years down the line, but willing partners will help them move forward.

The fifth generation prototype (perhaps the size of a coffee table) hovers using to the blown wing principle, and the sixth, due to fly in a few months, will introduce the transitioning flaps. (I was shown a video of the prototype doing tethered indoor hovering but the company is not releasing this test footage publicly.)

The design of the final craft is still in flux — it’s not known exactly how many rotors it will have, for instance — but the basic size, shape, and capabilities are already penned in.

It’ll carry 9 passengers and a pilot, and fly around 35,000 feet or so at approximately 300 knots, or 345 mph. That’s slower than a normal passenger jet, but whatever time you lose in the air ought to be more than regained by skipping the airport. The range of the cleaner hybrid gas-electric engines should be around 1,000 miles, which gives a good amount of flexibility and safety margins. It also covers 45 of the top 50 busiest routes in the world, things like LA to SF, Seoul to Jeju Island, and Tokyo to Osaka. 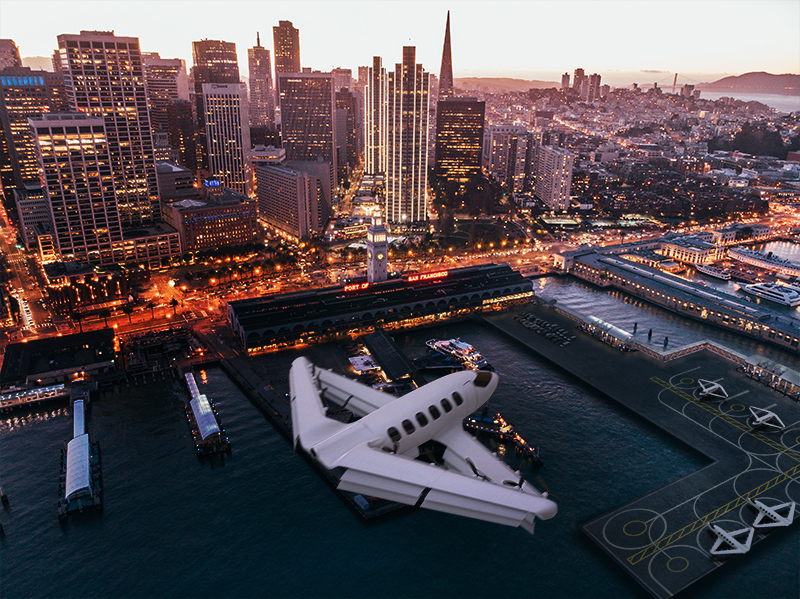 It probably wouldn’t be flying at this altitude.

Notably, however, Dorris wants to make it clear that the idea is not “LAX to SFO” but “Hollywood to North Beach.” VTOL aircraft aren’t just for show: regulations permitting, they can touch down in a much smaller location, though exactly what kind of landing pad and micro-airport is envisioned is, like the aircraft itself, still being worked out.

The team, which has just worked its way through Y Combinator’s summer 2021 cohort, is experienced in building sophisticated transport: Dorris was a primary on Virgin Hyperloop’s propulsion system, and his co-founder Axel Radermacher helped build Karma Automotive’s drivetrain. It may not have escaped you that neither of those companies makes aircraft, but Dorris thinks of that as a feature, not a bug.

“You’ve seen what’s come out of traditional aerospace over the last 10, 20 years,” he said, letting the obvious implication speak for itself that the likes of Boeing and Airbus aren’t exactly reinventing the wheel. And companies that partnered with automotive giants hit walls because there’s a mismatch between the scales — a couple hundred aircraft is very different from half a million Chevy sedans.

So Craft is relying on partners who have looked to shake things up in aerospace. Among its advisors are Bryan Berthy (once Director of Engineering at Lockheed Martin), Nikhil Goel (one of Uber Elevate’s co-founders), and Brogan BamBrogan (early SpaceX employee and Hyperloop faithful).

The company also just announced a letter of intent from JSX, a small airline serving low-friction flights on local routes, to purchase 200 aircraft and the option for 400 more if wanted. Dorris believes that with their position and growth curve they could make a perfect early partner when the aircraft is ready, probably around 2025 with flights beginning in 2026.

It’s a risky, weird play with a huge potential payoff, and Craft thinks that their approach, as unusual as it seems today, is just plainly a better way to fly a couple hundred miles. Positive noises from the industry, and from investors, seem to back that feeling up. The company has received early stage investment (of an unspecified total) from Giant Ventures, Countdown Capital, Soma Capital, and its advisor Nikhil Goel.

“We’ve demonstrated it, and we’re getting an enormous amount of traction from aerospace people who have seen hundreds of concepts,” said Dorris. “We’re a team of only 7, about to be 9 people… Frankly, we’re extremely pleased with the level of interest we’re getting.”

First Cheque Closes Its $5 Mn Fund; Will Back 50 Pre-Seed Startups

What Are The Five Revolutionary Types of Marketing Tools Needed by Modern Marketers to Grow Their Business?

10 Ways To Make Your Own Luck Driving Startup Success