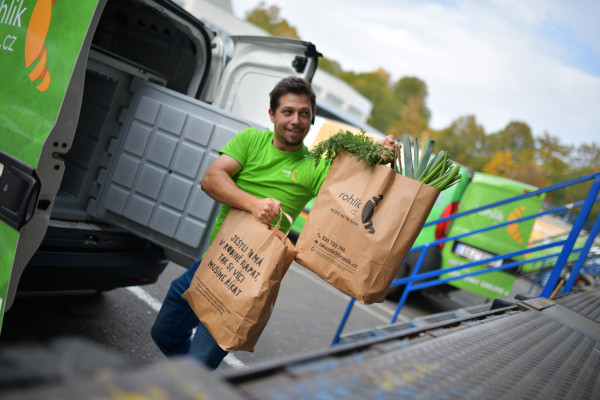 Food delivery — whether it’s ready-made orders from restaurants, meal kits or groceries — has been one of the most-used services in this last year of living under the cloud of a global health pandemic, and today one of the companies with ambitions to build a pan-European empire in the third of these categories is announcing a major round of funding to help it get there.

Rohlik, a Czech startup that has built an online grocery ordering and delivery business combining your usual grocery fare — which it procures itself wholesale, or offers in concert with established businesses like Marks & Spencer — with items sourced from local small businesses, has picked up €190 million ($230 million at today’s rates).

It plans to use the funding to expand its footprint across metropolitan areas in its existing three markets — the Czech Republic, Hungary and Austria — as well as to break into Germany, Poland, Romania and other countries in the near future.

The company — which has some 17 thousand items in its online store — saw revenues rise 101% in FY 2020 to €300 million on 750,000 customers, and it is profitable. This round will give it significantly more fuel to grow than its balance sheet would, Tomáš Čupr, Rohlik CEO and founder, told TC in an interview.

In a market now full of companies offering online grocery delivery, from online arms of established brick and mortar sellers through to “digital native” brands, one of Rohlik’s unique selling points has been to tap into the specific shopping habits of average European urban consumers, who regularly combine shopping at smaller businesses alongside supermarkets.

“We found the sweet spot of great service, which is two-hour delivery turnaround ordered in windows of 15 minutes, and an amazing assortment. Traditionally you find supermarket assortments in online grocers, but what is the point of waiting for that? We have a supermarket, too, but we married it with local butchers, fishmongers, bakers, fruit and veg sellers, things you can’t buy in mass retail,” said Čupr. “We are saving people 5-7 shopping trips, not just the one to the supermarket, and that’s why we managed to scale.”

The round was led by Partech with significant participation also from Index Ventures. The EBRD, Quadrille Capital, J&T Bank, R2G, and Enern (a current investor) were also in the round.

The valuation is not being disclosed but Forbes’ Czech edition, when reporting on the round being in the works in January, said it was over €600 million ($723 million). We understand from sources it is around $600 million.

Founded in 2014, Rohlik’s funding comes at an interesting and key moment in the online grocery business, in Europe and beyond.

First, we as consumers have proven out the immediate and lasting demand for these services in the last year.

Shelter-in-place orders, and a general move from large parts of the consumer population to socially distance to help keep down community spread of the Covid-19 pandemic, have led to huge surges of consumers using online food ordering for their grocery needs.

That caused, in many cases, for those systems to get overloaded. For example, Ocado here in the UK, where I am a customer, saw its system fall over with the demand, leading it to implementing strict online queuing systems; many companies were unable to keep up with stock demands and requests for delivery slots; etc.)

Even with some (very much not all) countries in Europe relaxing parts of their orders, grocery has remained a very-much used online category in markets where it is available. That is to say, whatever growing trends there were before a year ago, that adoption has accelerated and stuck.

Second, online grocery delivery has become a key area of interest for investors, concentrating specifically on startups, who see an opportunity to innovate even as some of the very biggest players, such as Amazon, beat partial retreats.

Last year, we reported that Dija — a new startup from former Deliveroo employees in London — was raising a round; Gorillas in Berlin raised $44 million in December; Ocado in the UK (which is listed here but is run like a startup) raised over $1 billion.

Last month, Wolt in Finland — which started with restaurants but has since expanded into other areas, including grocery — raised $530 million; Glovo in Spain picked up $120 million; and Weezy in the UK raised $20 million.

And just today, yet another online-only grocery delivery startup, Crisp in the Netherlands, raised $36 million (€30 million), and Flink in Germany raised $52 million, with both of those deals led by Target Global.

Depending on the country, the target market (urban-only or everyone, families or single people), and the choice of food that’s getting delivered (eg, those who want things that are slightly more prepared versus farm-fresh produce for bigger cooking efforts, etc.), and sourcing relationships (directly with brick-and-mortar retailers, small or big, direct from producers), different startups are taking their own approaches around what kind of models they are building to manage sourcing, logistics and fulfillment.

Some are taking on “dark” convenience stores in cities, as is the case with Gorillas; others are using large fulfillment centers well outside of urban centers, such as Ocado. Some are building their supply chains from the ground up, while others are working with existing retailers, big and small.

The attraction in part with Rohlik is how it has used logistics technology combined with a close understanding of the market (one of Čupr’s previous startups was a restaurant delivery business, acquired by Delivery Hero) to build its platform.

“We’re making a substantial bet and we’re not looking for any business that provides a substitute to existing services,” said Index partner Jan Hammer, in an interview. “We’ve invested in different models around the globe and we have good experiences with Good Eggs. As a tech investment firm, we look at commerce payments, warehouse software and related models that can be synergistic. The macro trend is universal offline to online migration through a better business model. That is the direction of travel. As a VC we would also say that it’s also down to the individuals involved.”

Rohlik, Čupr said, uses large fulfillment venues that are not as big as out-of-town centers but located much closer to where their customers are based. (This could also potentially give the company an opportunity for expansion into new cities: as large supermarkets become less profitable, they can present themselves as a real estate opportunity for online delivery companies like Rohlik.)

Interestingly, a company probably most similar to Rohlik, and thus one of its potentially closest competitors, Picnic from The Netherlands, last raised money in 2019, $300 million, to build an automated distribution center to serve its home country and Germany. Perhaps it will be next in line for a big round of money. (I’ll also note that both Index and Accel were reportedly interested in Gorillas but neither invested in the end. With Index now putting its bets on Rohlik, you have to wonder what Accel might do next, if anything.)

A lot of companies in this space up to now have been focused on national markets — Instacart has not expanded outside of North America, Ocado is only in the UK, and so on. The opportunity for a company like Rohlik is to export its model to more countries that have similar market dynamics to those it already serves.

“Rohlik is the most exciting player in the European online grocery industry,” said Omri Benayoun, General Partner at Partech, in a statement. “We are honored to partner with Rohlik’s founder Tomáš Čupr, whose passion for service, sustainability and vision for the grocery sector we share. Rohlik’s execution expertise has earned it the trust of both local merchants and global FMCG companies; allowing Rohlik to outperform on quality and price compared to the grocery giants.”

Updated with more updated numbers from Rohlik on its full-year figures, and some changes to investor names in this round: Kaiser Permanente Ventures is not involved.

Early Stage is the premiere “how-to” event for startup entrepreneurs and investors. You’ll hear firsthand how some of the most successful founders and VCs build their businesses, raise money and manage their portfolios. We’ll cover every aspect of company-building: Fundraising, recruiting, sales, legal, PR, marketing and brand building. Each session also has audience participation built-in — there’s ample time included in each for audience questions and discussion.

Kencko takes in new capital to shake up how we consume our fruits, vegetables – TechCrunch