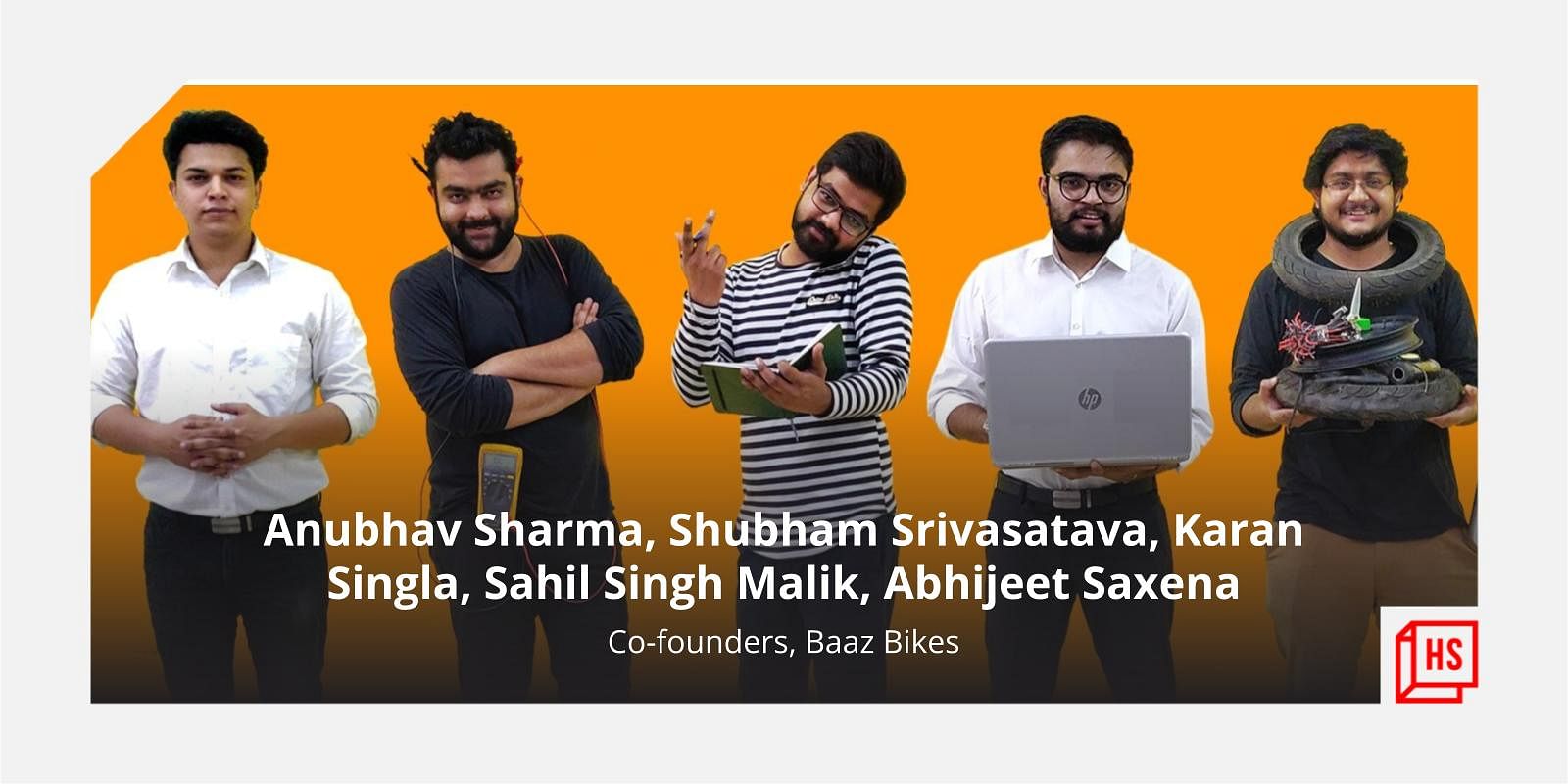 The buzzword of the automobile industry, and the startup world, is certainly Electric Vehicle (EV). The biggies of the industry — Ola and Ather — are no longer the only ones pushing towards the greener future, but a host of startups across India are evaluating every segment/stakeholder in the EV revolution and building solutions for the same.

One such startup in the space is Baaz Bikes that is looking to solve the mobility needs of the gig/delivery workers with its “cost effective” end-to-end EV mobility platform.

The Delhi-based startup sells its in-house assembled bikes to its chain of rental partners who use the platform to further rent these bikes to the gig workforce. The startup has installed automated battery swap stations/machines across regions that can be accessed by the gig workers or “Baazigars”, who can avail the complete on-ground support from the rental partners.

The aim is to build the entire ecosystem, including bike, battery swaps stations, and software, to help a gig worker kickstart their journey in the most cost effective manner.

A purpose-built bike for “Baazigars”

The founders — Anubhav Sharma, Shubham Srivasatava, Sahil Singh Malik, Abhijeet Saxena, and Karan Singla — lay down the genesis of the startup, starting with a strong founding team and sector expertise that helped them build a purpose-specific product.

The motorsport enthusiasts and budding engineers were brought together by IIT Delhi’s automobile club — Axlr8r Formula Racing. They had together built a Formula car, by which they became the first and only Indian team to have their electric car running on the prestigious F1 Circuit in Germany.

“Working on several auto projects together, we had formed a team. We realised that we had unique insights to building successful world-class EVs and the opportunity must be leveraged,” says Anubhav.

In 2018, the engineers donned the entrepreneurial hat with their first venture, ElecTorq Technologies (parent company). They continued to work on their flagship product, the Baaz Bike, while building key auto products for clients like Vogo and Rapido. The first generation of the bike was ready by 2019.

The pandemic laid bare a unique opportunity for the founders, who witnessed the rise of the ‘delivery culture’ and decided to look at the problem of the workforce behind it.

“There was no specific platform that focussed on making the lives of gig workers easy. Their in-hand incomes are a result of how much they earn and spend. There are many companies like ShadowFax, Zomato, Dunzo, etc., that are focussed on increasing their earnings. More the orders, the more the income. Our focus is on the spending side, which includes the cost of purchasing, maintaining, and operating a vehicle, which is extremely high for a gig worker to maintain or afford,” says the founder.

In a usual scenario, a gig worker approaches a rental company and pays a fixed price for an EV on rent, starting from Rs 5,000 — Rs 8,000 per month. Now, this upfront cost remains invariant to the income generated by the worker each month, which could sometimes be less than the fixed cost itself. On top of that, the worker is responsible for everything, starting from charging to technical support.

This takes us back to the statement of how Baaz Bikes is attempting to create a differentiator in the market. The foremost being its focussed market for gig workers and a purpose-built product.

“The use case of a two-wheeler varies among providers. We are concept focussed and have built specifically for gig workers. It’s a robust product, has no plastic components that can break, and is designed to go for 120 kms per day without hurting the backs and so on,” says Anubhav.

Second comes the cost efficiency or the unit economies for a gig worker himself. The platform sells the bike to the rental partner on a fixed price (Rs 30,000 per bike), who further rents it out to the gig worker at a monthly rent of as low as Rs 1,500. The worker is then charged on a per kilometre basis, which turns out to be beneficial for him, especially on days he has limited deliveries.

The rental partners operate as micro entrepreneurs and take care of the entire on-ground support, providing the workers a point of contact in case of any problem.

“The total costs for a gig worker could come out to be same in both the cases, but they will have the advantage of low upfront cost, comfortable ergonomics over long distances and durations, a hyperlocal battery swap network that would maximise the uptime of vehicle, and an on-ground support ecosystem,” says Anubhav.

The third differentiator, according to the founders, is the value of building the entire ecosystem that includes bikes, battery swap, and software. This makes sense for a player like Baaz that operates in a hyperlocal space.

The idea is in the same vein as Taiwanese company Gogoro’s network, which has in-house Smartscooters and an entire modular battery swapping infrastructure of 2,000 GoStations. It further offers vehicle innovations to vehicle maker partners like Hero, Yamaha, Aeon Motor, eReady, and eMOVING, auto products (carbon belts, battery cells and performance tires), besides having its own electric scooter sharing service.

“We aim to build a one-stop shop for everything a gig worker needs to get started with his journey. Everything will be offered in-house with limited dependency on third parties or partners,” says the founder.

The platform makes money through the sale of bikes to the rental partners at a margin of about 20 percent. Besides this, the startup is looking to make money through the per kilometre cost they charge on battery swaps.

A single battery operates for around 50-55 kms.

At present, the startup is profitable on the per kilometre cost (contribution margin positive) and has about 50 bikes (proof of concept) and swap stations live in two major areas of New Delhi—Saket and Malviya Nagar. The automatic battery swap stations have been set up across kiranas and restaurants at present.

The startup has set up its assembly facility in Faridabad, Haryana, and is looking at production of 1,000 bikes in the next 120 days, and 5,000 by the end of FY23. The size of the fleet purchased by a dealer could start from as low as 50 to 250 bikes.

“Our demand pipeline is sorted. Delhi is divided into about 70 clusters and we aim to replicate the playbook throughout these clusters by mid-2023 (over 40,000 delivery executives). It will be a radial expansion. We have built an asset light and scalable business model for better unit economics in distribution and delivery,” says the founder.

There are hosts of small-sized local companies and two-wheeler rental startups like Yulu Bikes and Zypp that are operating in the space.

The closest competition comes from Yulu Bikes that follows a Yulu-owned and operated shared mobility model where people can pick up these electric bikes from nearest public points for short or longer term (longer rental plans for gig workers).

The same model is handled by third-party franchise partners. However, Yulu’s target audience is not entirely focussed on gig workers, but people who need a second vehicle to cover short distances.

Baaz also faces competition from Gurugram-based Zypp. The D2C EV startup is gig workers and logistics-focussed and assists its delivery riders in purchasing a scooter on EMIs.

Baaz Bikes has raised about $2.3 million (Pre-Series A) to date, and is backed by Kalaari Capital, AdvantEdge, 9Unicorns, and Sumant Sinha (CMD, Renew Power). The startup is in talks with investors for a Series A funding, and is aiming to close the round in the near future. It is looking at an Average Run Rate (ARR) of $5 million by the end of the current financial year.

“We are already a profitable company on a per km basis. We are not struggling on that part. Our focus right now is on product development and refinement, and we are heavily investing in that,” the founder says.

The demand for delivery executives will continue to rise in future from sectors like construction, manufacturing, retail, transportation, and logistics. Much of the demand is from India’s red-hot quick commerce market, which is expected to grow 15x by 2025, representing a $5.5 billion  market and addressing over 20 million households in India, according to a recent report by management consulting firm RedSeer.

Natalie Lambert on Why Measuring TOFU Content is Painful

How Digital is Transforming Financial Technology