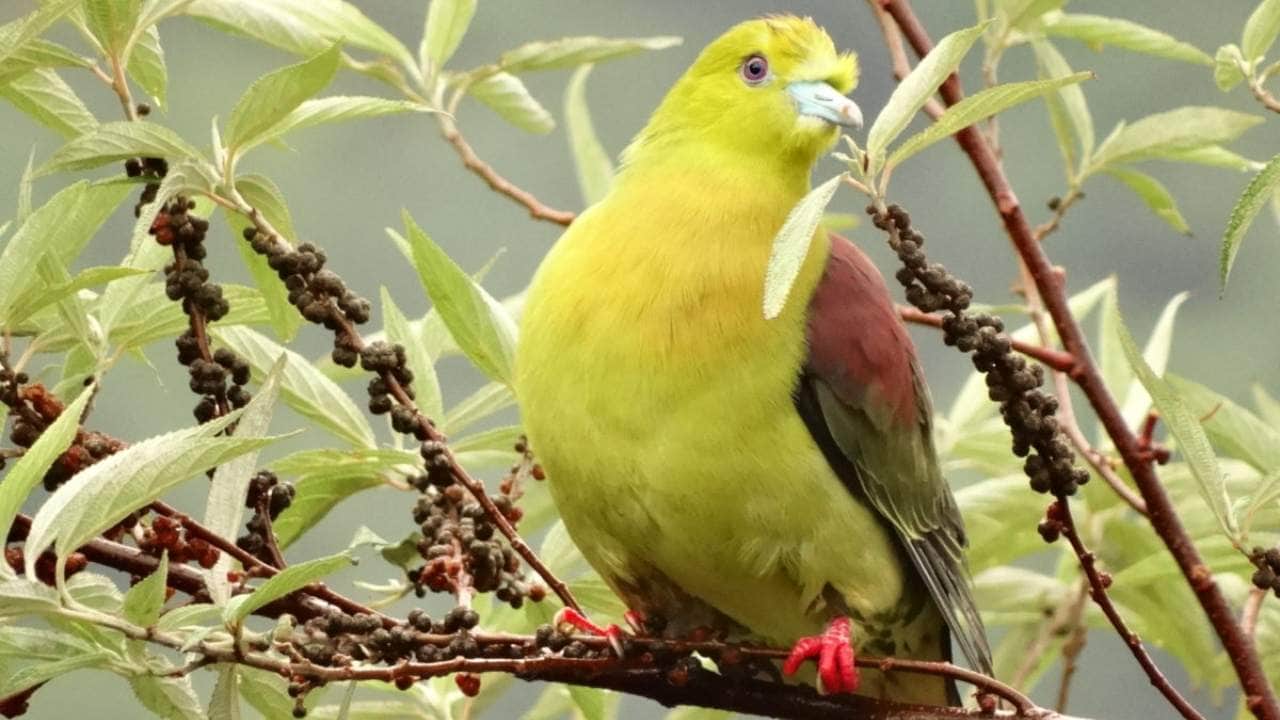 Land-use changes in the western Himalayan forests, a global biodiversity hotspot with huge numbers of endemic species, have resulted in a massive decline in forest birds in the region, new research shows.

Scientists from the Centre for Ecology, Development and Research (CEDAR), Dehra Dun and Centre for Cellular and Molecular Biology (CCMB), Hyderabad, studied the effects of land-use change on forest bird species and ‘guilds’ (any group of species that exploit the same resources, or that exploit different resources in related ways) in areas in the western Himalayas. They surveyed the birds systematically during their breeding season, in six land-use types. These include natural, protected oak forests; degraded, lightly used oak forests; lopped, heavily used oak forests; pine forest areas which are now steadily encroaching into natural oak forests; cultivated land; and built-up sites, in two adjoining landscapes, over two consecutive years. The study shows “moderate to drastic species loss in all modified land-use types in comparison to natural oak forest.”

Cultivation sites were found similar to built-up sites, and provide breeding habitats for open country species such as grey bushchat, black francolin, russet sparrow, streaked laughing thrush (Trochalopteron lineatus), and Himalayan bulbul (Pycnonotus leucogenis), which are not seen in any forest land use.

Cultivation sites also have a large number of forest generalists such as blue whistling thrush and red-billed blue magpie, as well as commensals and open country birds, but are not able to support forest specialists. The new findings suggest that forest species are largely not able to survive in cultivation areas. At the same time, cultivation sites show higher species richness, and have abundant pollinators and insectivores in comparison to the modified oak forests and pine, “indicating that cultivation may help sustain significant ecosystem providers.” Built-up sites due to urbanisation had the least number of birds in all three categories, and the birds that were found were commensals or open country birds, with very few forest species.

Bird guilds in the western Himalayas

The scientists also studied the abundance of bird guilds. They report a “steep decline” in the functional guilds in areas with modified land uses compared to natural oak forests. “Our results have important implications for conservation in biodiverse mountain landscapes with significant human imprint,” the report says. The findings “can be globally applied to land use and conservation planning in human-dominated landscapes.” 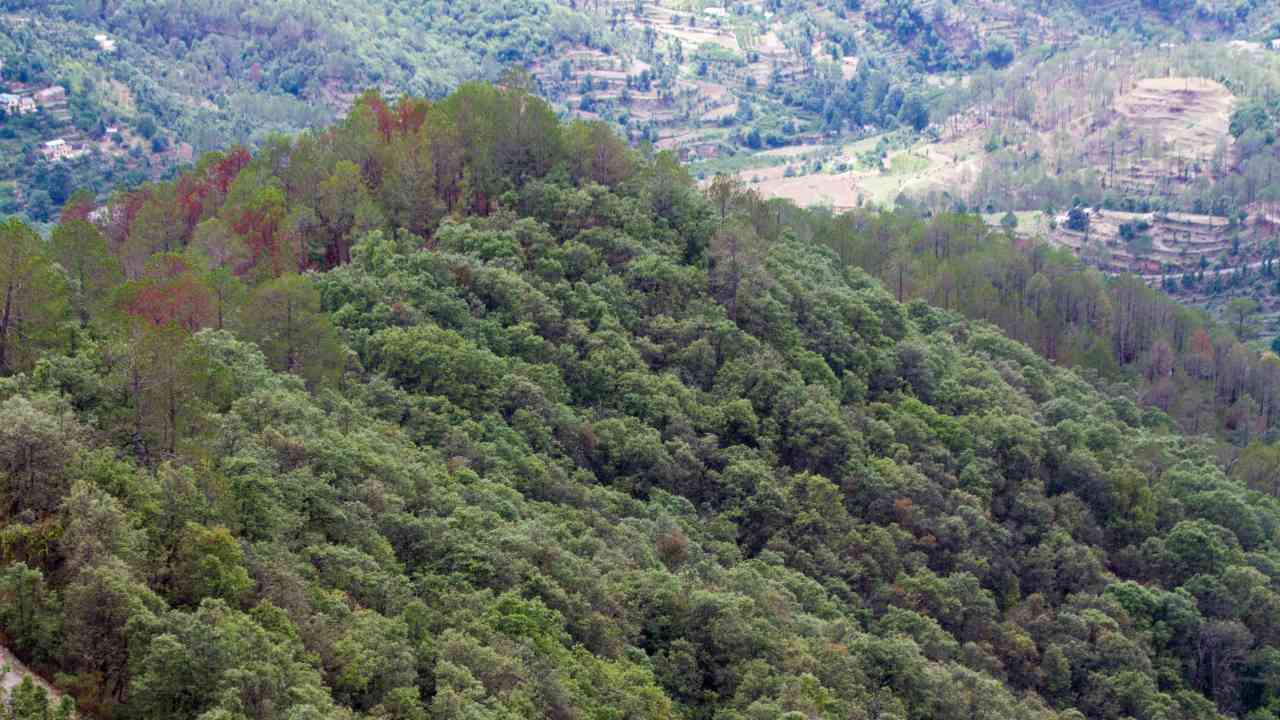 A protected stand of banj oak in the Kumaon region of W. Himalaya. Photo by Vinay Nair.

The findings have several implications. While it is well-known that forest conversion and modification result in species losses, “what is of interest in this study is the degree of ‘defaunation’ or impoverishment of fauna, which is of the order of 25-75 percent in both species richness and abundance,” Ghazala Shahabuddin, a senior fellow at CEDAR and one of the authors of the study, told Mongabay India. “This was not known earlier.”

The drastic loss, of 50-60 percent, of insectivores and pollinator birds “implies that these crucial ecosystem services will be affected sooner or later, in the larger landscape, including pollination of agricultural crops and pest control in the fields,” she adds. The study has found tremendous loss of oak forest specialists, ranging from 67 percent to 93 percent loss in terms of abundance in various modified forests, as these birds require dense forests to meet their needs.

“This means that birds adapted to live, feed, and breed in the natural oak forest may disappear from this landscape if the land-use change process continues in the future,” warns Shahabuddin.

Also, there is an ongoing expansion of chir pine areas, which has extremely low bird diversity, into oak forests. Chir pine forests have extremely low bird diversity, almost half of that of protected oak forests and very different birds. This is likely to result in landscapes with low bird diversity, without several forest specialists and endemic species in future. The middle Himalayas with the oak-pine zone is where the maximum land-use change is expected during the next few decades, due to hydro-electric projects, tourism, urban expansion, and road -widening. The natural oak forests of this region are, hence, especially threatened and further loss of oak forests can result in loss of natural resource-based livelihoods and local employment such as in agriculture, says Shahabuddin.

The study is comprehensive as it surveys a wide range of disturbances in the landscape, compared to most previous studies that looked at one or two types of land-use change, says Umesh Srinivasan, assistant professor, Centre for Ecological Sciences, Indian Institute of Sciences, Bangalore “The decline in some guilds like pollinators and insectivores (insect-eaters), which provide critical ecosystem services, is massive and worrisome, he says. Insectivores worldwide are especially vulnerable to any kind of forest loss in the tropics, he adds.

“In the western Himalayas, the oak biome is critical in supporting species. Potentially, climate-related replacements of oak by, for example, pine will be detrimental to one of the richest areas of biodiversity in the Himalayas and the world,” says Srinivasan.

In general, the middle Himalayan region, with altitude ranging between 250-6,524 metres above sea level, have the highest number of bird species, compared to the foothills and very high elevations. So the loss of forest birds in this zone is worrying, says Srinivasan.

Losses in Eastern Himalayas too

Recent studies in the Eastern Himalayas too show similar disturbing trends. Srinivasan and David Wilcove from the department of ecology and evolutionary biology at Princeton University have studied the survival of birds in forests of Arunachal Pradesh in the Eastern Himalayas. As temperatures warm, forest birds are steadily moving upwards to find cooler habitats conducive to their survival. But their survival is imperilled if they end up in disturbed habitats such as logged forests or agricultural land, they report in Ecology. Rufous sibia, a forest specialist species, is under threat due to oak forest degradation. Photo by Jagdish Negi.

The study in Arunachal is the first demonstration of how “two of the most disruptive” influences due to human activity – climate change and land use — interact to threaten the survival of biodiversity in natural populations, the report says. “Ignoring interactions between climate change and land‐use change can potentially undermine accurate forecasting of the future of species in an increasingly warm and degraded world,” it cautions. And large tracts of well‐protected primary forests across various heights in tropical mountains may be essential to enable tropical montane species to persist in the face of climate change.

Similarly, researchers from the Nature Conservation Foundation, Bangalore, who studied hornbills in Arunachal Pradesh in the eastern Himalayas, have reported considerable forest loss around nesting trees for hornbills, including the Great Hornbill, Weathered Hornbill and Oriental Pied Hornbill. From 2011 to 2019, forest cover in the study area, Papum reserve forest, declined from 38.55 square km to 21.94 square km around these hornbill nest trees, mainly due to illegal logging.

“Our results highlight the ongoing threats to biologically-rich forests and the need for urgent measures to halt this loss,” says Aparajita Datta, NCF scientist and one of the authors of the study.

There are several policy implications of Western Himalayas research findings. “The government has to undertake measures to stem the loss of hardwood forest in the middle Himalayas,” says Shahabuddin. These include the establishment of wildlife sanctuaries and protected areas which are currently few in the middle Himalayas compared to the alpine and subalpine zones. Another measure is to create and operationalise community reserves and biodiversity heritage sites in which local communities who depend on these forests can take part.

“Only through community involvement can the government hope to stem forest fires, which are a major cause of the oak-to-pine transition; and to reduce lopping and timber removal from oak forests to sustainable levels,” she says. For example, the government of Uttarakhand can consider direct cash transfer schemes, incentives related to development funds and other compensatory schemes to revitalise forest protection, which has always been a part of the tradition of the hill people, but which has weakened over the years, she adds.

The bird loss is part of an overall loss of biodiversity in the tropical mountains due to land-use changes and global warming. For the past 15 years, scientists have been warning of massive forest loss in the Himalayas. “With the current level of deforestation, by 2100 only about 10% of the land area of the Indian Himalaya will be covered by dense forest (>40 percent canopy cover)—a scenario in which almost a quarter of the endemic species could be wiped out, including 366 endemic vascular plant taxa and 35 endemic vertebrate taxa,” a report in Biodiversity and Conservation warned.

Mongabay-India is an environmental science and conservation news service. This article has been republished under the Creative Commons licence.