The adoption of financial apps is surging in Southeast Asian markets like Indonesia, the region’s most populous country. Founded by fintech veterans last year, Brick develops APIs that make it easier for tech companies to add identity verification and access financial data from their users. It is currently partnered with Indonesia’s seven largest banks, covering more than 90% of the country’s bank accounts, and plans to expand into all Southeast Asia countries.

More than three-fourths of Southeast Asia’s population is unbanked or underbanked, meaning that don’t have a bank account or access to traditional lending services. Brick will serve them as well, with products like mobile wallet and telcos APIs that are currently in beta and slated for launch next quarter.

Brick was founded in 2020 by chief executive officer Gavin Tan, an early employee at Aspire, a neobank for small- to mid-sized businesses, and chief technology Deepak Malhotra, previously co-founder of Indian neobank Slice and a former PayPal engineer.

Tan said he began thinking of launching Brick while working at high-growth fintech startups in Southeast Asia, including Aspire, and encountering a lack of infrastructure that slowed product development. 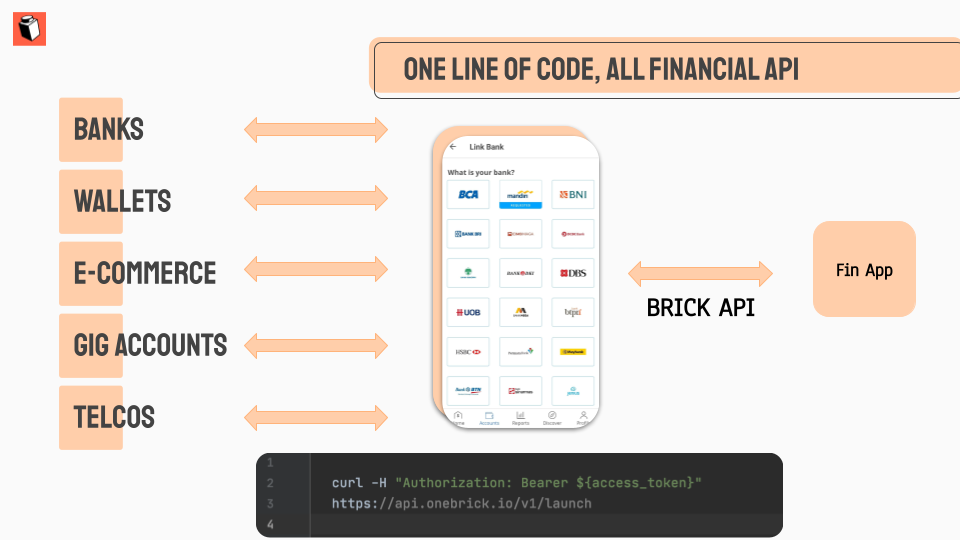 Brick and other fintechs have benefited from strong support from Indonesian regulators. For example, Bank Indonesia published open banking API standards in 2020.

Tan said the standards “represents concrete government recognition of open banking principles, including consumer ownership of data and the necessity of their consent to transfer and use that data (which Tan describes as “a core principle that all our products adhere to”) and establishing a common language for banks and fintechs that enables the adoption of embedded finance. It also laid out implementation timelines for open APIs, beginning with payment initiation APIs in 2021, which Brick will launch later this year.

The most obvious comparison for Brick is to Plaid, the financial API provider that helped enable the adoption of open banking and open finance in the United States, Canada and European countries. A key difference, however, is that Plaid serves markets where the majority of people have a bank account.

On the other hand, “in Southeast Asia, only 25% of adults regularly use a bank account,” Tan said. “For the 75% unbanked and underbanked adults, their data resides in alternative financial data sources.” To tap into that market, Brick is building APIs for alternative financial data sources, like mobile wallets, telcos, utility providers, e-commerce platforms, social security and tax offices.

The company is currently focused on product launches in Indonesia, and plans to start expanding into other high-growth fintech markets, including Singapore, the Philippines and Vietnam, later this year.

Thanking Our Partners For Making The Makers Summit 2021 A Success

Overlooked Tips to Boost Conversions on Your PPC Campaigns

Brazil’s Abstra lands Accenture as a customer and $2.3M to help teams make apps with its no-code tool – TechCrunch