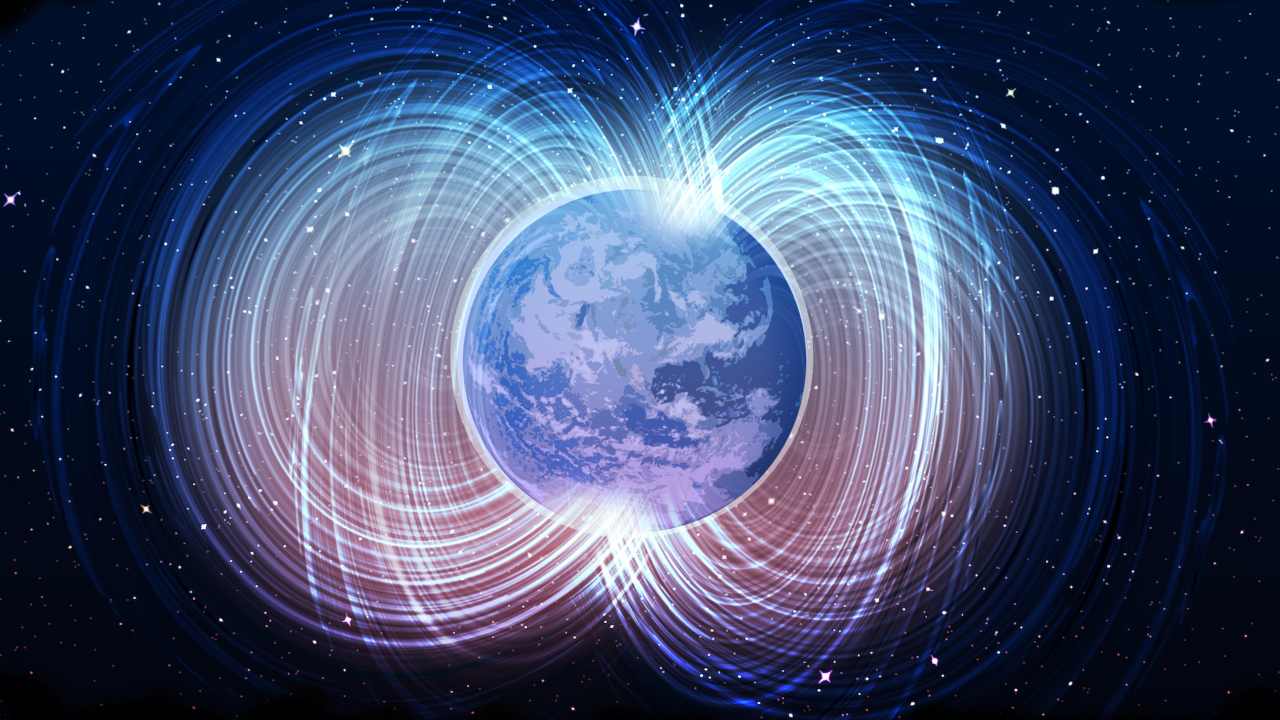 About 41,000 years ago, something remarkable happened: Earth’s magnetic field flipped and, for a temporary period, magnetic north was south and magnetic south was north. Palaeomagnetists refer to this as a geomagnetic excursion. This event, which is different to a complete magnetic pole reversal, occurs irregularly through time and reflects the dynamics of Earth’s molten outer core. The strength of Earth’s magnetic field would have almost vanished during the event, called the Laschamp excursion, which lasted a few thousand years. Earth’s magnetic field acts as a shield against high-energy particles from the Sun and outside the solar system. Without it the planet would be bombarded by these charged particles.

We don’t know when the next geomagnetic excursion will happen. But if it happened today, it would be crippling. Satellites and navigation apps would be rendered useless — and power distribution systems would be disrupted at a cost of between US$7 billion and US$48 billion each day in the United States alone. Obviously, satellites and electric grids didn’t exist 41,000 years ago. But the Laschamp excursion — named after the lava flows in France where it was first recognised — still left its mark.

We recently detected its signature in Australia for the first time, in a 5.5 metre-long sediment core taken from the bottom of Lake Selina, Tasmania.

Within these grains lay 270,000 years of history, which we unpack in our paper published in the journal Quaternary Geochronology. They can be carried from the landscape into lakes through rainfall and wind. They eventually accumulate on the lake’s bottom, becoming buried and locking in place. They effectively become a fossil record of Earth’s magnetic field.

Scientists can then drill into lake beds and use a device called a magnetometer to recover the information held by the lake sediment. The deeper we drill, the further back in time we go.

In 2014 my colleagues and I travelled to Lake Selina in Tasmania with the goal of extracting the area’s climate, vegetation and “paleomagnetic” record, which is the record of Earth’s magnetic field stored in rocks, sediment and other materials.

Led by University of Melbourne Associate Professor Michael-Shawn Fletcher, we drilled into the lake floor from a makeshift floating platform rigged to two inflatable rafts.

The first Australian evidence of Laschamp

Our dating of the core revealed that the biggest shift in magnetic pole positions and the lowest magnetic field intensity at Lake Selina both occurred during the Laschamp excursion.

But for a core that spanned several glacial periods, no single dating method could be trusted to precisely determine its age. So we employed numerous scientific techniques including radiocarbon dating and beryllium isotope analysis.

The latter involves tracking the presence of an isotope called beryllium-10. This is formed when high-energy cosmic particles bombard Earth, colliding with oxygen and nitrogen atoms in the atmosphere.

Since a weaker magnetic field leads to more of these charged particles bombarding Earth, we expected to find more beryllium-10 in sediment containing magnetic particles “locked-in” during the Laschamp excursion. Our findings confirmed this.

The interaction between charged cosmic particles and air particles in Earth’s atmosphere is also what creates auroras. Several generations of people would have witnessed a plethora of spectacular auroras during the Laschamp excursion.

Building on work from the 1980s

Only two other lakes in Australia — Lake Barrine and Lake Eacham in Queensland — have provided a “full-vector” record, wherein both the past directions and past intensity of the magnetic field are obtained from the same core.

But at 14,000 years old, the records from these lakes are much younger than the Laschamp excursion. Four decades later, our work at Lake Selina with modern techniques has revealed the exciting potential for similar research at other Australian lakes.

With this knowledge, we may one day potentially be able to predict the next geomagnetic excursion, before our phones stop working and the birds overhead veer off-course and crash into windows.

Our dating of the Lake Selina core is just the start. We’re sure there are more secrets embedded beneath, waiting to be found. And so we continue our search.

Four theories are being considered as possible origins for the COVID-19 virus- Technology News, FP

Samsung Galaxy A32 with 64 MP quad-camera setup to soon launch in India, to go on sale on 5 March- Technology News, FP

Sony PlayStation 5 will be available for pre-order in India today at 12 pm on Amazon, Flipkart, Sony Center and more- Technology News, FP