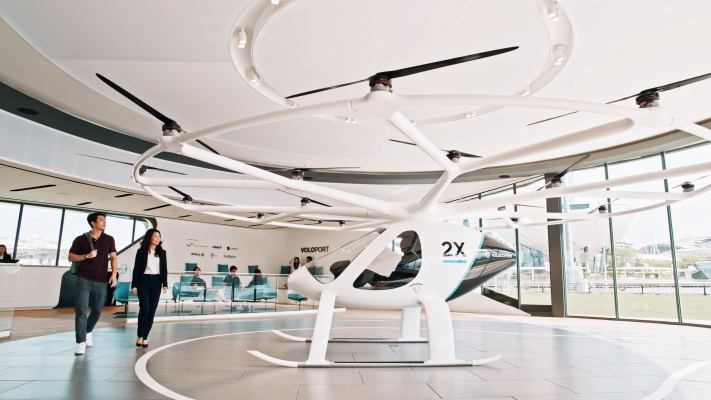 In a year where mass transit on airplanes, trains and buses has had lower traveler numbers in the wake of the Covid-19 pandemic, one of the startups hoping to pioneer a totally new approach to getting individuals from A to B — flying taxis — has raised some significant funding.

Volocopter, a startup out of southern Germany (Bruchsal, specifically) that has been building and testing electric VTOL (vertical take-off and landing) aircraft, has picked up €200 million (about $241 million) in a Series D round of funding. Alongside its aircraft, Volocopter has also been building a business case in which its vessels will be used in a taxi-style fleet in urban areas. CEO Florian Reuter tells us that live services are now two years out for the two vehicle models it has been developing.

“We are actually expecting to certify our VoloCity in around two years and start commercial air taxi operations right after,” he said. “Paris and Singapore are in pole position [as the first cities], where Paris wants to get have electric air taxis established for the 2024 Olympics. With our VoloDrone we expect first commercial flights even earlier than with our VoloCity.”

To date, Volocopter has shown off its craft in flights in Helsinki, Stuttgart, Dubai, and over Singapore’s Marina Bay. In addition to Europe and Asia, it also wants to launch services in the U.S..

For some context, this is basically on track with what the company had previously projected: in 2019 — when Volocopter raised an initial $55 million in funding for its Series C (finally closed out at €87 million, around $94 million) — the company said it was three years away from service.

If that sounds like a big list, it’s somewhat intentional, as the task of what Volocopter is complex and requires a wide ecosystem of other players, said Rene Griemens, the company’s CFO.

“Getting urban air mobility off the ground requires a full ecosystem that we are developing right now. Many of our strategic partners will support us on different aspects of the supply chain, scaling components, entering markets, improving operations amongst others. Most of them know certain aspects of our business model really well (eg. Japan Airlines for aviation, Atlantia for infrastructure),” he said. “Their investment is a reflection of their excitement about Volocopter as a leader in building the entire ecosystem of UAM, thereby giving credibility and comfort for purely financial investors.”

He added that many of these companies have a very “hands-on partnership” with Volocopter. “DB Schenker, for example, is rolling out leading-edge heavily-load electric logistics drones together with us around the globe.”

The company has now raised nearly $390 million. We’re asking for an updated valuation, but for some context, PitchBook data estimates its valuation now at $624 million.

Founded in 2011, Volocopter has now been working on its idea — distinctive for its very wide circular design that sits where the rotor on a helicopter would be — for a whole decade, and in many regards it’s the classic idea of a moonshot in action.

It has yet to make any money, and the product that it’s building to do so is very groundbreaking — flying into completely unchartered territory, so to speak — and therefore ultimately untested.

It’s not the only one working on “flying taxi” concepts — there are other very well-capitalised companies like Lilum, Joby Aviation, Kitty Hawk and eHang.

However, all of these have faced various hurdles ranging from investor lawsuits to bankruptcies, accidents, mothballed projects and divestments (perhaps most notably, Joby scooped up Elevate last year as Uber stepped away from costly moonshots).

And most importantly, none of them are flying commercially yet. With Volocopter (as with the others), investors have taken a long-term bet here on a concept and a team it believes can deliver.

For now, the company says that technology is no longer the barrier, and neither it seems are regulators, who are, in the pandemic, more focused on considering new approaches to old problems to improve efficiency and acknowledge that we might have to do things a little differently from now on, in the wake of new demands from public health, and the public.

In the case of VTOL craft, the promise has always been that they could bypass a lot of the issues with street congestion in urban areas, and provide a more environmental alternative to gas-guzzling, present-day transportation modes.

The challenge, on the other hand, has been determining the safety both of completely new devices, and also of the traffic and other systems that they would operate under. With the idea being that ultimately these craft would be autonomous, that adds another complex twist.

Interestingly, regulators in different markets that might have been more skeptical of new concepts seem to be more open to considering them differently now with the pandemic at hand. This has played out in other arenas, too, such as the electric scooter market in the UK, which saw a bump in activity after regulators long skeptical gave them a provisional nod last year, citing the need for more individualized transportation options in a pandemic-hit country.

Volocopter’s model is based around transporting one person or small parties, so in a sense might be attractive here too.

“There aren’t any major hurdles anymore in terms of the technology as such,” said Retuer. “It is now all about execution. EASA has defined what is necessary to get electric air taxis certified to the highest safety level in aviation. We have the best technology in the market to certify to EASA’s high safety standards and will keep our heads down to finalize the few remaining steps to certification.”

In contrast, he said the other challenges that remain are those of any highly technical startup: “Our largest challenge right now is talent acquisition,” he said. “We are looking for the best talents worldwide and growing our team quickly now, so that we can accelerate on the technical and market development sides. Especially in the markets where we will open early routes, such as Paris, Singapore, China and Japan, we are going full speed in preparing everything necessary from digital infrastructure to landing sites, city approvals and more.”

From Beauty To Fashion, Here Are Key Highlights