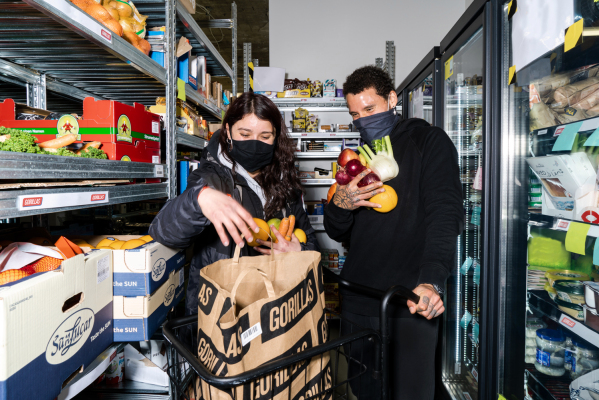 Gorillas, the Berlin-HQ’d startup that promises to let you order groceries and other “every day” items for delivery in as little as ten minutes, has raised $290 million in Series B funding, at a valuation that surpasses $1 billion.

The round is led by Coatue Management, DST Global, and Tencent, with participation from Green Oaks, and Dragoneer. Previous backer Atlantic Food Labs also followed on.

Noteworthy, Gorillas CEO and co-founder Kağan Sümer tells TC the round is “100% equity” (i.e. without a debt component). Asked if it includes any secondary funding — seeing existing shareholders liquidate a portion of their shares — Gorillas declined to comment.

Having become one of the fastest European startups to have achieved so-called “unicorn” status — a valuation of $1 billion or more — Gorillas says it will reward its rider crew and warehouse staff with $1 million in bonuses. However, the company isn’t disclosing how this one-off bonus breaks down per worker, and it isn’t clear if the bonus is cash or stock or a mixture of both.

“In contrast to established gig economy models, we employ more than a thousand riders directly,” says Sümer. “Therefore, we invest in a strong career development program, rider security and a healthy working environment. Beyond that, all riders will receive a once-off payment”.

Founded last May by Kağan Sümer and Jörg Kattner in Berlin, Gorillas has already expanded to more than 12 cities, including Amsterdam, London and Munich. The company lets you order groceries and other household items on-demand with average delivery time of ten minutes.

To do this, it operates a vertical or “dark store” model, seeing it set up its own micro fulfillment centers, which currently total 40, spread across Germany, U.K., and the Netherlands. Customers are charged just over $2 per delivery and can order from “more than 2,000 essential items at retail prices”.

“We believe that the weekly grocery run is outdated because people’s lives are increasingly spontaneous and shopping habits change accordingly,” says Sümer, noting that while access to supermarkets has increased, the space we have to store goods has decreased as people in cities are living in smaller spaces.

“Additionally, this pandemic has accelerated the need for grocery deliveries. If we can order clothes and trinkets and have them delivered to our door, the same should be said for our essential needs. Gorillas helps customers get what they need when they need it, whether this is their weekly grocery list or the tomatoes they forgot for tonight’s pasta recipe”.

Sümer says that the service initially attracted typical early adopters because it was a radically new experience and the app was only available in English. He claims that Gorillas has since gained a “very broad” base of users that are “extremely loyal”. “With geographical expansion and the rapid increase of word-of-mouth, we now cater to pretty much anyone you’d meet in a supermarket,” he says.

Asked to share what a typical basket looks like, and therefore what kind of existing grocery habits Gorillas is displacing, Sümer says that users increase their basket size over time as they gain trust in the service and its products. “Simultaneously, customers are integrating an increasing share of their typical supermarket purchases within their Gorillas orders. This includes fresh goods like fruit and vegetables, as well as products of local suppliers”.

Meanwhile, dark store competition in cities like London — where Gorillas recently expanded and counts as a key market — continues to ramp up. This is seeing operators issue vouchers and offer sizeable discounts in a bid to acquire customers fast, while VCs are pumping huge amounts of early-stage cash into a space where unit economics aren’t yet definitively proven.

Earlier this month, Berlin-based Flink announced that it had raised $52 million in seed financing in a mixture of equity and debt. The company didn’t break out the equity-debt split, though one source told me the equity component was roughly half and half.

Others in the space include London’s Jiffy, Dija, and Weezy, and France’s Cajoo. There’s also London-based Zapp, which remains in stealth, and heavily backed Getir, which started in Turkey but recently also came to London.

Meanwhile, U.S.-founded goPuff — which this week raised another $1.15 billion in funding at a whopping $8.9 billion valuation (compared to $3.9 billion in October) — is also looking to expand into Europe and has held talks to acquire or invest in the U.K.’s Fancy.