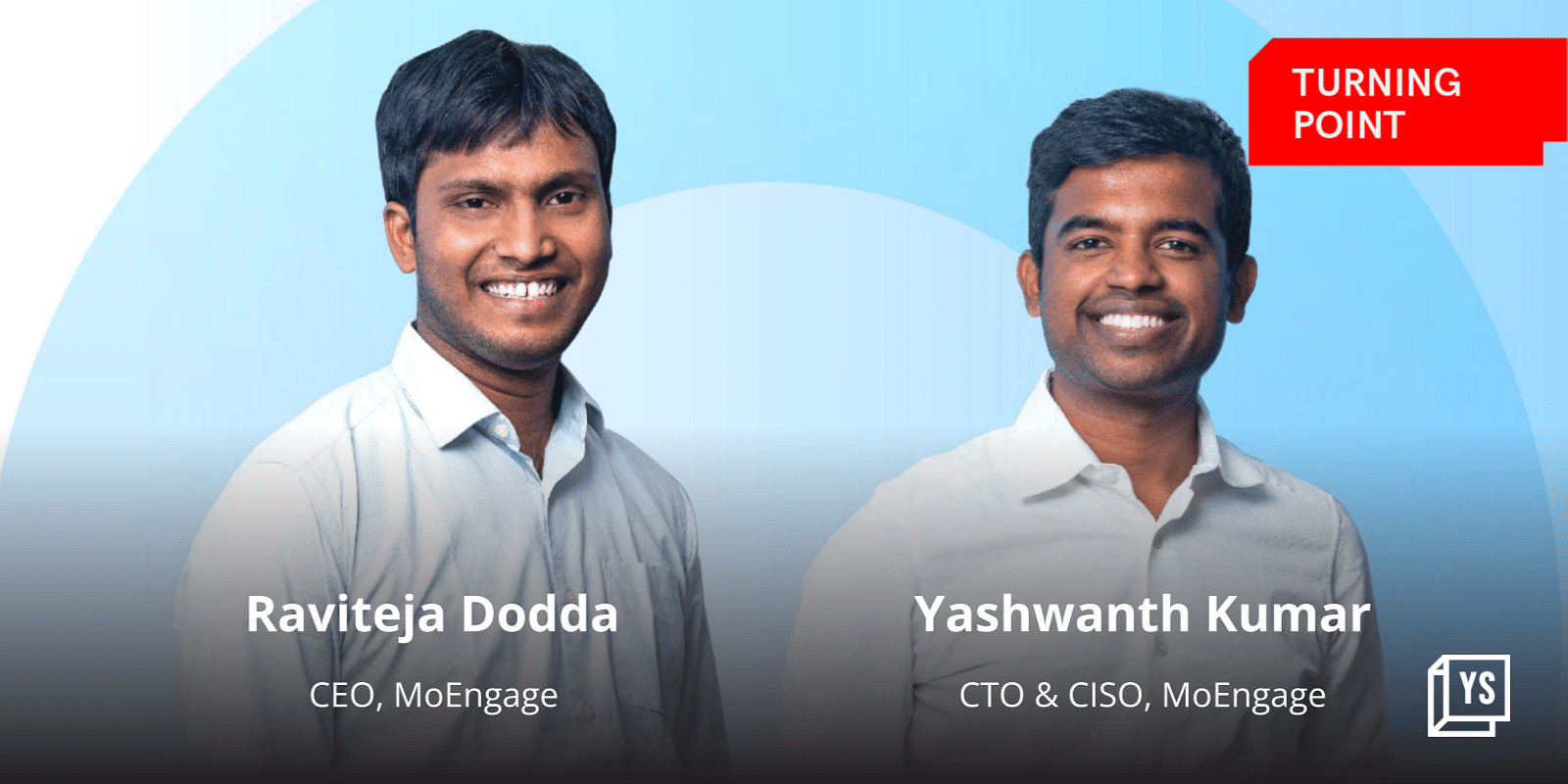 This was the third round of funding raised by the company in the last 12 months, with $32.5 million raised in July and $30 million in December 2021. This was also the first investment by Goldman Sachs Asset Management in an Indian SaaS company.

Founded in 2014 by Raviteja Dodda and Yashwanth Kumar, MoEngage is an insights-led customer engagement platform for consumer brands that empowers marketers and product owners with AI-driven insights to create cross-channel experiences that consumers love. It works on a customer-centric approach and enables personalisation at scale across mobile, email, Web, SMS, and messaging channels using AI and in-built analytics.

“When MoEngage started out, we had only one guiding light—to build the world’s most trusted customer engagement platform,” shares Raviteja Dodda, CEO, MoEngage.

But this was not the first venture started by the co-founders. Raviteja Dodda and Yashwanth Kumar were classmates at IIT Kharagpur, where they experimented with small scale startups in the SMS marketing space. But after graduation, they parted ways.

In 2011, Ravi and Yashwanth came together again to set up Delight-Circle, a mobile-first local offers and coupon network. The company saw great success initially, but soon found out that engaging and retaining consumers proved to be challenge.

Despite continued growth in customer base, the founders realised that equally higher, about 70 percent, installed users were not returning or were uninstalling the app within the first 30 days.

This made the founders dig deeper into the problem and they concluded that the tools they had at Delight Circle were more campaign centric and not customer centric.

In other words, delivering personalised recommendations and contextual offers across multiple channels were the key to engaging and retaining customers. This meant developing a tool for traditional marketing and customer engagement built for a desktop world wouldn’t work for the digital-first and mobile-first world.

This led the entrepreneurs to build a business for customer-centric approach using tools that offered insights into customer behaviour, journeys, likes, dislikes, preferences, and the ability to instantly act on those insights with relevant and contextual communications.

Thus, Raviteja and Yashwanth started MoEngage in 2014. According to them, the platform was quickly accepted into the Alchemist Accelerator Program, where the team was mentored to bring to life its vision for a customer-centric engagement platform in the mobile-first world.

Where it is now?

Ravi shares that to attain the confidence and trust, “we needed to place customers at the centre. Seven years later, it still remains the most important principle that we lean on. Almost every decision we make within the company is based on how it impacts the end-customer. Whether we plan the product roadmap or our next hire—customers are always at the heart of everything we do.”

Today, MoEngage has more than 650 employees in 13 offices across ten countries. It has over 1,200 customers and nine offices across 35 countries. Some of its clients are Fortune 500 brands and enterprises such as Deutsche Telekom, Samsung, Ally Financial, Vodafone, and McAfee. Internet-first brands such as Sharechat, Roposo, Gaana, Ola, OYO, and Bigbasket also use MoEngage to engage their customers efficiently.

In the coming months, MoEngage plans to deepen its geographic footprint in the US, Europe, Asia, and Middle East markets, and expand to new markets like Latin America and Australia.

“We also plan to explore strategic acquisitions that can help extend its platform capabilities and provide more value to customers,” says Ravi.

The startup will also use the funds raised to scale up its research capabilities as well as use it for potential strategic acquisitions that would help it extend its platform capabilities.

How Hearth Ventures is supporting artisans and weavers