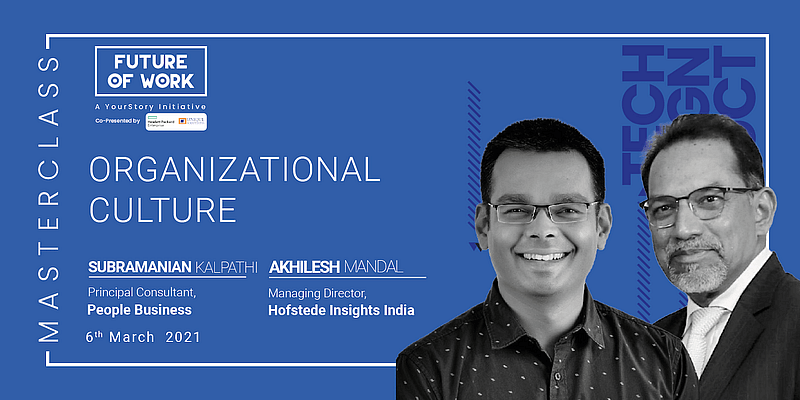 In the early stages of a startup’s growth journey, emphasis is placed on building the right technology stack and refining one’s business model to ensure scalability and profitability.

According to Akhilesh Mandal, Managing Director at Hofstede Insights India, it is only when organisations are looking to scale up and expand their operations do they seriously analyse their organisation’s culture.

“And while culture is a fascinating and complex concept, customers (organisations) often tend to look at it in a simplistic way, and often as a quick fix,” he said. Akhilesh was giving a masterclass, titled ‘Organisational Culture’ on Day 2 of the Future of Work 2021 summit.

Through this masterclass, Akhilesh gave an overview of what organisational culture is, its importance in the growth of a company, the various factors that govern it, and how to move towards an optimal culture to meet growth objectives.

Also read | Future of Work: Here’s why technology will play a crucial role in a startup’s growth strategy

He began the masterclass by giving four different economic scenarios in which organisations operate: the big tech economy, where most technologies develop at a rapid pace, right from self-driving cars to AI-powered robots; a precesision economy, where technology development is not as quick, but hyper-surveillance provides insights that can be leveraged towards growth; an exodus economy that is plagued by economic slowdown and recessions, which ultimately cannot support technological development; and the empathy economy, which encourages the responsible stewardship of technological advancements. This is an economy that fosters technological development, but is also aware of the potential dangers it might possess.

In such varied economic scenarios, Akhilesh argues that, “There is an additional demand on leadership (to perform)…Redesigned business processes look at the raw need of the consumer, which is why we don’t just sell cars or TVs, but ‘complete mobility solutions’ and ‘entertainment streaming services’. This will have an impact on leadership, work, and the workplace,” he said. This is why, he added, there is a need for looking at how culture will enable the necessary transformations to an organisation to grow in this environment.

Quoting Dutch social psychologist, Geert Hofstede, Akhilesh said, “All companies have a company culture, but not every culture helps implement and drives the company’s strategy.”

He also outlined the two types of cultures in which we function. The first is the organisational culture, which underpins how we carry out operations within a particular organisation. The second is national culture, which defines how we relate to practices within an organisation. For example, Indians have an affinity towards power distance, which is the extent to which the less powerful members of organisations and institutions accept and expect that power is distributed unequally. This is less predominant in western countries.

“While we often assume that all (organisations) operate with the same organisational culture, do not assume it will be treated on the same emotional plane by a Brazilian, a Japanese, and an Indian person,” said Akhilesh, adding that this is largely due to conditioning of individual national cultures.

He went on to outline how Hofstede Insights enables an organisation to change their culture by analysing the various facets of their organisational culture, determining the gaps that are holding back their productivity, and intervening by providing consulting services, coaching their leadership, and suggesting organisational changes.

Also read | Future of Work: Titan Company’s Head of Analytics and Insights sheds light on the importance of personalisation at scale

Akhilesh ended the session by suggesting that it is never too early to analyse and think about one’s organisational culture. But to arrive at an optimal culture, “one must first have their business strategy in place, and then align your business and leadership practices to execute the strategy”.

He also made a clear distinction between the desired culture, which would facilitate an ideal working environment, and an optimal culture, which enables the sustainable growth of an organisation and helps achieve its business strategy.

“The desired culture need not be the optimal one,” he said. The session was followed by a Q&A session by Subramanian Kalptathi, Principal Consultant at People Business, where questions were fielded on how startups can build an optimal organisational culture.

50+ May Marketing Ideas (and Examples) for Any Business or Budget –