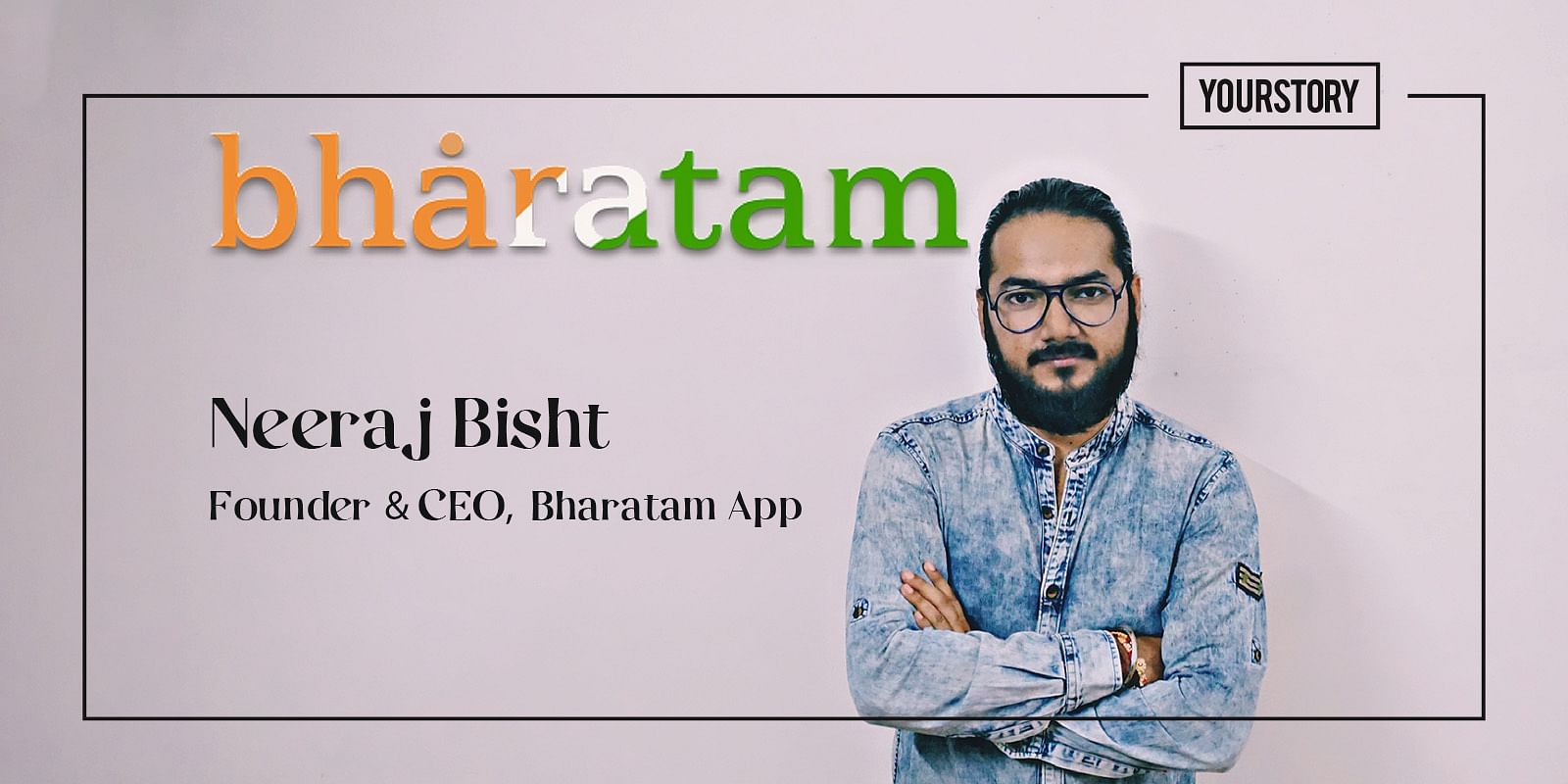 From retail brands to social media giants, everyone wants to grab a piece of India’s billion-dollar vernacular content opportunity.

A report by IAMAI and Kantar reveals that the number of active internet users in India is expected to touch 900 million by 2025 with the rural user base growing over three times faster and catching up to surpass the urban user base.

Seeing a chance to cash in on this opportunity, serial entrepreneur Neeraj Bisht launched social media networking app Bharatam in July 2021. The app has already been downloaded over 9,000 on Google Play Store and is aiming to touch 2-3 million downloads by the end of the year.

With plans to take on the likes of Facebook, Bharatam aims to create a more localised experience for users and enable discovery and engagement for people and businesses nearby.

Kickstarted by Neeraj’s personal savings of Rs 10 lakh, it recently bagged a grant of $25,000 from Microsoft’s startup programme.

“A lot of people confuse us with a content creation platform. We are a pure social networking app with a heavy focus on localisation,” Neeraj tells YourStory.

Made in India, for Indians

A law graduate, Neeraj quit his job at Thomson Reuters to don the entrepreneurial hat in 2014 with corporate gifting company giftooz.com.

Though the venture did not take off as planned, he stayed on the lookout for another big idea and soon launched Delivree King, a delivery and promotion service provider, and then, a mobile development company Tecmanic. Delivree King shut down operations in 2016.

The idea of Bharatam (parent company – Bisht Technologies Pvt Ltd) was conceived during a casual conversation over the ‘Make in India’ narrative and the rise of homegrown ventures. Looking to capitalise on the growing traction of community-based interactions, Neeraj conducted a survey to map the opportunity and found some interesting facts.

“About 90 percent of users outside urban areas like to watch videos rather than create one. We found more demand for a complete engagement platform for local communities as compared to just videos or pictures,” he says.

At present, the India-exclusive app offers four different languages that are synced with the phone. Once signed up, a user can create posts, blogs, add friends, upload pictures and videos, chat via the messenger, and also sell products.

The platform doesn’t provide a business account as of now, but acts as an escrow service with Bharatam app gateway, for transactions.

“We are in the process of adding the business account feature by September. Brand partnerships are also in the pipeline” says Neeraj.

The partnerships will be a win-win for both customers and brands located in a particular region. The latter will be notified about potential customers through the app and will be able to push instant offers and deals while the former will bag extra incentives.

“We are yet to figure out a concrete model for brand partnership. We will charge them either on the basis of customer conversions or listing premium,” says Neeraj, adding that safety and security of data are key priorities.

The Noida-based app works on both freemium and paid models and offers an annual membership at Rs 99. Its revenue channels include advertisement, marketplace, and paid memberships. Its additional features include verification badges, post boosts, customised profiles, and so on.

“Some of the features on the app are free and once we cross a million users, we will begin monetising them. Interestingly, more than 30 percent of our free users have become paid users,” says the founder.

The app plans to offer free advertisement and promotion opportunities to brands that hit a particular number of followers on their profiles.

Social media is a competitive space with Big Tech ruling the game for years. Even homegrown apps like ShareChat, Koo, Helo, Roposo, and Josh that gained momentum after the ban on Chinese apps, Aatmanirbhar Bharat initiative, and internet affordability, are riding the vernacular content wave and aggressively vying for the top spot.

However, Neeraj says that the market is big enough for everyone to co-exist. Current and future internet users in India will need to connect with their community, he says, and the opportunity is huge considering India has over 750 languages and more than 90 percent of the population converse in vernacular.

Also, the opportunity for social media networking is not unique but untapped as compared to its size. Majority of the homegrown apps are in the short-video space (like TikTok) which places Bharatam up against Sharechat, TokBiz, Koo, and global giants like Facebook.

The app aims to initiate engagement between local sellers and buyers once it hits a set target of the user base. The power of its data will also unfold once it amasses a considerable user base.

“The algorithms will be applied to the data collected from users. This will help us localise the app. Users will be able to find the nearest products, services, and people, allowing us to differentiate from the competition,” says Neeraj.

In the next few weeks, the startup will aggressively market its app, along with expanding its team. It has already tied up with some social media influencers to boost engagement.

“We will touch a million by September and then venture into newer projects along with raising money,” says Neeraj.

The app will soon launch on iOS and add 60 local languages by the end of the year, he adds.

On the prospect of making their first rupee, the founder says, “We are not even thinking of making revenue right now. Having said that, we will never burn cash and put our money in growth-led decisions.”

Locus.sh co-founder on his entrepreneurial journey and why he pivoted from B2C to B2B