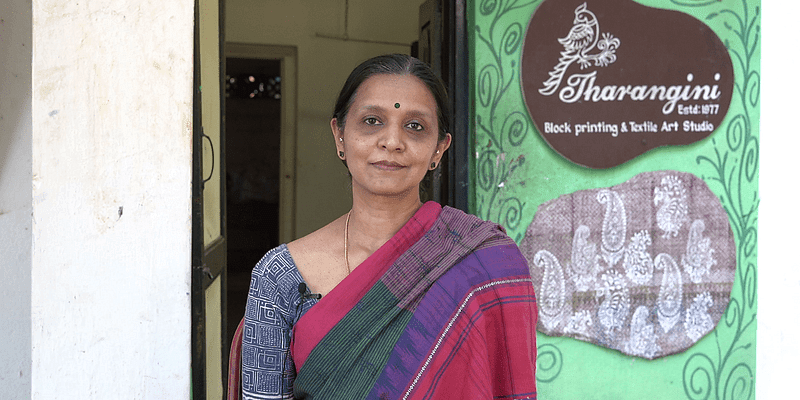 Back in 2007, if you had asked around for a heritage textile studio using sustainable practices in Bengaluru, chances are your search would have yielded no answers. Cue to the present. Tharangini is one of the few sustainable fashion studios in the country and is keeping the art of hand block printing alive, season after season. Its owner Padmini Govind only has her roots to thank for the success.

For Padmini, the decision to make a switch from a career in tech to running Tharangini was one that she made by listening to her heart. “My mother, who passed away in 2011, gave me the freedom of choosing between running Tharangini and continuing with my job. While she had never pressured me into taking over the studio, I couldn’t let the last heritage studio in Bengaluru get shut. So, I took over in 2007,” she says. Years later, Tharangini is now catering to an impressive clientele with its custom-made orders and exporting to several countries including the UK, US and Australia.

Going back to the roots

Before turning entrepreneur, Padmini had worked across sectors like fintech, financial services, manufacturing and defence in the US after studying at the University of Wisconsin. She later relocated to India in 2007, while working with an Indo-US defence firm.

Padmini had grown up seeing her mother toiling at the studio with a small team of hand block printing artisans. “Tharangini was a part of my roots. Even while I was in the US, I was always connecting small-time designers to my mother,” she says. What sets Tharangini apart? For Padmini, it is its right foundation, strong values and sustainable designs. At Tharangini, the artisans work under fairwage conditions and use organic dyes to create aesthetic designs. Talking about her struggles while starting out, Padmini says, “For the first two years, we did a lot of research to know what we know now. There was a lot of blood, sweat and chai. But, now I am enjoying this phase.”

She also swears by the power of Instagram, which has helped her pivot sales. “As a B2B company, we work with a number of small brands and a lot of them have a presence on Instagram. It is also good for generating leads,” she adds.

From digital designs to analogue production, Padmini sees her role at Tharangini as that of a facilitator. “At Tharangini, decision making is a team job. From hiring, to planning collaborations to prioritising and production planning, the responsibilities are divided,” explains Padmini. In 2020, Tharangini made it to the Top 10 in an industry disruptor programme launched by UN Women for the sustainable fashion sector.

Tharangini was among the several businesses which were hit by the COVID-19 pandemic as the lockdown led to several logistical and labour issues. However, the studio slowly got back on its feet. “A change that I observed was that more and more people were focussing on value-added products and those made consciously during the pandemic, which benefited us,” Padmini adds.

She wants to expand her B2B business and refine her reach and participate in virtual trade fairs in the near future.

Speaking about the GAME Xcelerator Bangalore, she says that the programme brings in a lot of diversity that she really likes. “The calibre of mentors that they have lined up is incredible. It gives one a multi-channel view of your business, be it funding, finding a new network or a business strategy or research,” says Padmini.

Check out these Amsterdam platforms that are nurturing student-startup relationship

Don’t Be Afraid to Fail for Success