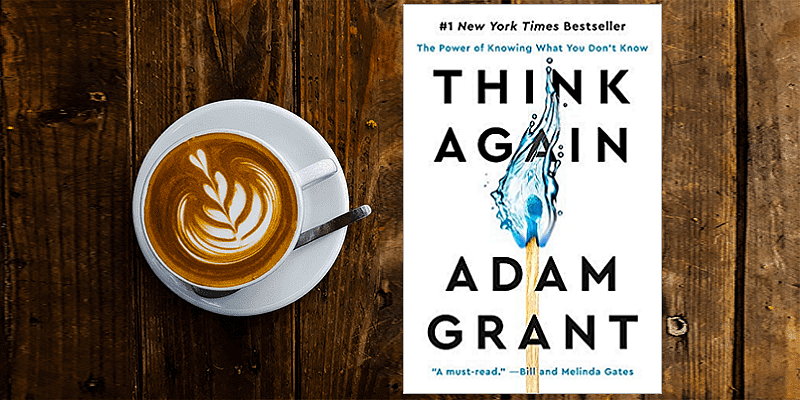 A comprehensive guide to the science and art of rethinking and unlearning is offered in the book, Think Again: The Power of Knowing What You Don’t Know, by Adam Grant.

The 11 chapters are presented in a highly engaging manner, with a mix of research, storytelling, and tips. There are numerous cartoons and diagrams, peppered with a sense of humour as well.

Adam Grant is an organisational psychologist at Wharton. An influential management thinker, his earlier books include Originals (see my book review here). His latest book is thoroughly researched with over 15 pages of references citing 250 sources.

“Intelligence is traditionally viewed as the ability to think and learn. Yet in a turbulent world, there’s another set of cognitive skills that might matter more: the ability to rethink and unlearn,” Adam begins.

But a number of biases and barriers come in the way, such as confirmation bias, desirability bias, binary bias, first instinct fallacy, cognitive laziness, escalation of commitment, and sunken costs.

Discarding assumptions, habits and instincts is tough because they constitute a part of our identity. “We favour the comfort of conviction over the discomfort of doubt,” Adam writes.

The COVID-19 pandemic has forced people around the world to keep rethinking their assumptions on virus impacts, comparison with the flu, nature of symptoms, and method of transmission.

Political protests (like Black Lives Matter and the Israel-Palestine conflict) have forced society to confront biases and prejudices about identity and human rights. Other contentious issues which call for rethinking are climate change, gun control and abortion rights.

Mental flexibility calls for the scientific mindset and evidence-based reasoning. It affects our professional and personal lives, as shown in the range of rethinkers profiled in the book.

“A hallmark of wisdom is knowing when it’s time to abandon some of your most treasured tools – and some of the most cherished parts of your identity,” Adam explains.

Here are my key takeaways from this valuable 300-page book, summarised as well in the table below. See also my reviews of the related books Social Chemistry, Rebel Talent, The Creative Curve, The Serendipity Mindset, Cross-Industry Innovation, and Innovator’s DNA.

“Rethinking is a skillset, but it’s also a mindset,” Adam explains; it goes beyond current knowledge, expertise, and experience. The rate of knowledge increase in many fields is itself increasing, which makes it important to unlearn in the face of new evidence.

Unfortunately, many people get stuck in the mindset of a “preacher, prosecutor or politician” – instead of being like a scientist who tests and revises hypotheses with fresh data. The scientific approach to entrepreneurship via MVPs, prototyping and pivoting has also been shown to be successful for many startups.

“Mental horsepower doesn’t guarantee mental dexterity,” Adam cautions. “The brighter you are, the harder it can be to see your own limitations. Being good at thinking can make you worse at rethinking,” he adds.

According to the Dunning-Kruger effect, people tend to brim with overconfidence when they actually lack competence (“the arrogance of ignorance”). It is important to overcome fragile egos and sharpen metacognitive skills (which includes thinking about thinking, and knowing what you don’t know).

“It’s when we progress from novice to amateur that we become overconfident,” Adam cautions. “As we gain experience, we lose some of our humility,” he adds; this leads to a false sense of mastery. A false sense of confidence leads to complacency.

“Confident humility” is at the sweet spot of being secure in one’s self but insecure about one’s tools, Adam explains. He illustrates this in the form of a 2X2 matrix called the “Confidence Sweet Spot.”

Successful rethinkers even revel in “the joy of being wrong,” and are willing to go beyond filter bubbles and echo chambers. They are delighted and not disappointed with new disconfirming evidence, and even make fun of themselves and their mistakes.

They don’t have an “inner dictator” that erects “mental armour.” They don’t attach themselves to assumptions and opinions that are shown to be false. Stumbling, backtracking, and rerouting are essential for progress.

“Evolving your identity can leave you feeling derailed and disconnected,” Adam cautions. Unfortunately, many people see an assault on their worldviews as a threat to their very self.

Unfortunately, many leaders avoid learning from creative conflict and “tough love” by surrounding themselves with “bootlickers, not boat-rockers,” with sycophants and yes-men, Adam laments.

“Strong leaders engage their critics and make themselves stronger,” he adds. But many employees hesitate to criticise the HIPPO (highest-paid person’s opinion) – this can be done only in cultures with psychological safety. Arguments should be taken as opportunities to learn, not as personal attacks. In conversations, improving is more important than proving.

Adam shares insightful stories of once-successful innovators who failed to rethink in the face of better competitors, such as Mike Lazaridis (Blackberry). In contrast, Steve Jobs was initially sceptical about phones when Apple was making iPods – but he was open-minded and willing to rethink his decision when convinced by his colleagues.

Spanx founder Sara Blakely was confident in her ability, and had the capacity and willingness to pick up what she didn’t know. Election forecaster Jean-Pierre Beugoms was “passionately dispassionate” – he regularly updated his predictions when presented with new information.

Wilbur and Orville Wright were brothers who “thought together” but also thrived from good scrappy fights about ideas and designs. Pixar’s Brad Bird (The Incredibles) nurtured creative excellence through a “challenge network.”

While the first section of the book deals with opening one’s own minds, the second part addresses how to open other people’s minds.

Airtight logic and rigorous data are not enough to win debates, which should be seen not as a tug-of-war but as a dance, Adam describes. It is better instead to find common ground, focus on only a few key points, express curiosity about positions, and ask genuine questions. He cites debating champion Harish Natarajan as an example in this regard.

The aim is to promote a rethinking cycle rather than an overconfidence cycle. Side-stepping is better than outright confrontation, and tranquility is more effective than hostility, Adam advises.

In job interviews, it helps to showcase motivation and ability to learn rather than just skills and credentials, he adds.

Sports rivalries and political polarisation are harder to tackle. The psychology of peace focuses on humanising the other side, which may change attitudes but not stereotypes, Adam describes, citing initiatives to address the Israel-Palestine conflict.

“Counterfactual thinking” involves taking others’ perspectives and circumstances. The “overview effect” results from projecting a larger picture of humanity, and can lead to global consciousness and a concern for the collective good, as seen in the attitudes of astronauts.

In fields like healthcare, active listening and motivational interviewing can help people overcome addictions, or resistance to vaccination. Holding up the mirror to them and triggering a rethinking cycle for self-discovery can help them see new possibilities. This method involves open-ended questions, reflective listening, and trusting the person to take the right decision independently.

Another technique described by Adam is “influential listening,” based on showing interest in the other without judgment. “Inverse charisma” refers to the magnetic quality of a great listener. Listening is not just about giving space but showing respect and care.

As examples of these approaches, Adam cites Betty Bigombe, who engaged with rebel groups in Uganda to air their grievances, explore opinions, and suggest measures. Black pianist Daryl Davis has had impactful conversations with white supremacists in his audience, discussing and dismantling stereotypes while building on a shared interest in music.

Collective rethinking can help create communities of lifelong learners, and applies to organisational employees as well as children and students.

Many tricky issues are distorted by painting them as binary alternatives when there are actually many shades of grey in between, Adam explains. “Complexifying” helps showcase a multitude of views, and spurs rethinking cycles.

For example, the climate change debate is not just about cults of believers and deniers, but about a full spectrum of those who are alarmed, concerned, cautious, disengaged, doubtful or dismissive.

The debate about emotional intelligence also can get polarised, when actually studies show that it depends on the context. Emotional awareness is more relevant in a customer service context than machine repair, for example.

Productive conversations yield good insights, find common ground, and question assumptions, Adam explains. The complexity of reality should be seen as an invigorating truth, not an inconvenient truth.

One chapter focuses on the role of rethinking in the culture of a learning organisation. A learning culture has psychological safety and accountability, Adam describes. There is a commitment to curiosity, open criticism, and learning from mistakes.

Psychological safety is not about being nice and agreeable, but being able to raise concerns without fear of reprisal, according to professor Amy Edmondson. Struggles are shared, and failures are not seen as a career threat.

Leaders and managers should share vulnerabilities. In one of Adam’s courses, faculty members shared “Mean Reviews” given to them by students.

When leaders share their challenges, it inspires others also to recognise and overcome their own shortcomings. It can also reduce power distance and make leaders more approachable, Adam observes.

The high-performance and overconfident culture of NASA with a focus on avoiding delays and critical discussion led to the earlier Challenger and Columbia disasters. There is now a stronger focus on addressing uncertainties in causes and effects, and speaking up about concerns and the need to learn more.

One chapter addresses rethinking in the context of education and parenting. Students can be shown how knowledge evolves by illustrating what has changed from old textbooks (eg. Pluto is no longer a planet).

They should be encouraged to investigate and interrogate the world around them, Adam advises. Student activities should include questioning themselves and one another, thus stimulating humility and strengthening rethinking cycles.

Group problem solving and active learning help in this regard, in addition to outstanding lectures. Teaching should be not just about imparting knowledge but developing learners’ capacity to think for themselves.

Open days and “passion talks” are other suggested methods. Another cited activity is asking senior students to write letters to their younger selves, describing what they wished they had known then.

Massachusetts teacher Ron Berger encourages students to develop their own classifications of animals (eg. size, colour, diet), map out habitats of local amphibians, participate in “gallery critiques” of their work, and conduct tests on tastes or the presence of radon in homes.

The concluding chapter address issues like rethinking one’s career and even the direction of humanity.

Unfortunately, “foreclosure” prematurely shuts off alternative options. People should be urged to explore different things they can do rather than settle on “what do you want to be.”

Just as people have medical checkups, people should also have career checkups to assess their needs and aspirations in life. Interviewing others, job shadowing, executing small projects, and contributing to higher causes help explore new passions, domains, and roles.

“There’s a fine line between heroic persistence and foolish stubbornness,” Adam cautions. Much has been said about the importance of grit, the combination of passion and perseverance. But grit also has a dark side if it cuts off the ability to rethink.

“Complex problems like pandemics, climate change and political polarisation call on us to stay mentally flexible. In the face of any number of unknown and evolving threats, humility, doubt, and curiosity are vital to discovery. Bold, persistent experimentation might be our best tool for rethinking,” the author affirms.

‘Rethinking liberates us to do more than update our knowledge and opinions – it’s a tool for leading a more fulfilling life,” Adam signs off.