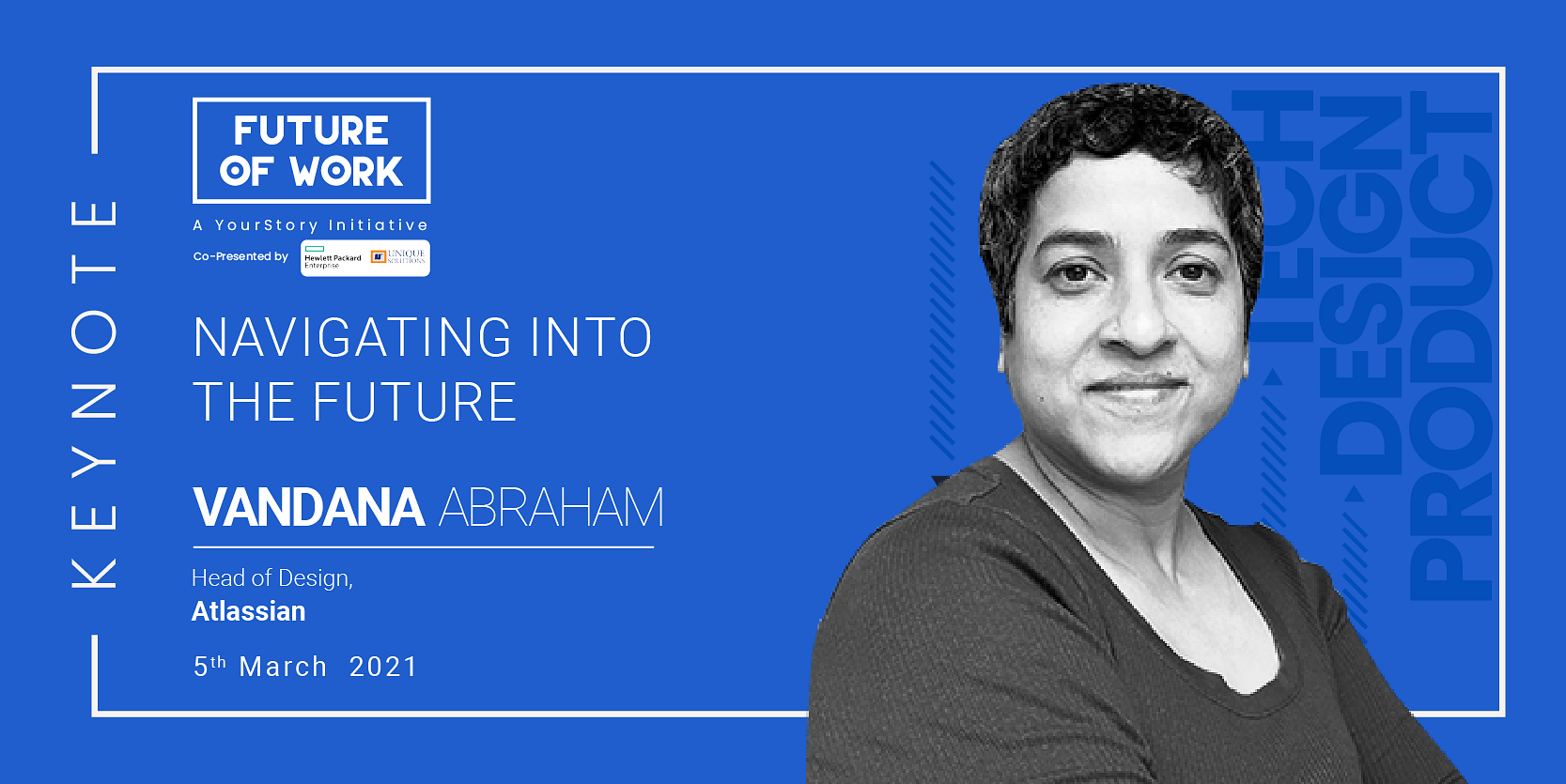 At the beginning of 2020, we were faced with a global pandemic, and our lives — both professional and personal — were changed forever.

Organisations and employees struggled to come to terms with this new way of life, while work-life balance reached a whole new level. One year later, what we once called the ‘new normal’, has possibly become the norm and has laid the roadmap for the future.

Vandana Abraham, Head of Design at Atlassian, on Day 1 of YS’s Future of Work, spoke on ‘Navigating the Future of Work,’ explaining how we can adapt to the new normal.

“We’re living through change. As we settle through this, we are going to have to prepare for the future. To achieve remarkable things, we have to unleash our own potential,” said Vandana before introducing Atlassian’s Playbook to achieve that creativity.

As we look at the future, there are both utopian and dystopian views of how it will be. While some were predicting four-day weeks, others were predicting that we would all lose our jobs to automation, Vandana said.

“Today, across industries, competition is rising and customer expectations are changing. While there is a demand to innovate faster, we can also choose what we can do with what is possible. Just because we have the ability to be ‘always on’ with our mobile devices doesn’t mean we have to be,” she said.

She added that curiosity and creativity will drive innovation as we built more complex systems for today’s complex problems. And, people were at the centre of this change and doing the right thing at the right time and not doing everything all the time.

Defining change and what it entailed, Vandana said it comprised people, practices, products/technology, and place.

“A lot of business leaders tend to begin by focussing on the technology aspect first. But, without people and processes in place, tools will never get you the desired outcome,” Vandana said.

She added that to be successful, businesses had to take a comprehensive approach and be congruent across all these aspects.

Looking to the future, she said businesses would have to take today’s learnings and project them into the future.

Just as organisations started realigning how they worked, individuals also had to examine how they could be the best version of themselves, Vandana said.

“We hear a lot from business leaders who are transforming their companies that they are not investing in transforming themselves. Everybody else needs to change, but they are doing fine. True leaders have to be role models,” she added.

Vandana said everybody should evaluate themselves over the past 90 days by using the ‘Four Ls’ benchmark. These are:

“I personally realised that I loathed meetings and was becoming a ‘Zoom’-bie. I felt that I was not being effective, just busy. I could pinpoint what I had to change. I had to dig into why I was in those meetings. Did I need to control the decisions being made?” she shares.

Vandana realised that she had taken on the role of a know-it-all. “I was blind to what was happening around me and convinced myself that I was indispensable. I realised that new talent and leaders had emerged,” she said.

A simple decision to delegate, segregate, and simply remove herself from meetings that were more a routine than necessary gave her back 15 hours where she could focus on what was important for real growth.

Vandana said individuals who had realised how to work efficiently could now be force multipliers for their teams.

“High-achieving teams had clear goals, gameplans, and checklists to get their work done. But it’s also important to be sustainably effective,” she said.

She also added that it was important to have team cohesion and a sense of belonging.

Speaking about Atlassian’s plays that could help businesses diagnose how a team is working together, she said, “It’s called a Health Monitor. Once you’ve identified the issues, you can use our other plans to resolve the issues.”

Recently, Atlassian ran the Work-Life Impact Play across 5,000 employees across the globe. The company found that every individual experiences’ working from home differently. This was based on three factors.

“We found that different people were struggling with different things. This not only offered insights but helped teams build empathy for each other. There were better communication, better cohesion, and individual teams could identify and fix issues that existed within,” she shared.

She said that we had the responsibility to be the best versions of ourselves as each of us held the key to unleashing potential — of ourselves, the team, and the company. And that ultimately would be the best thing for the customers

Instoried In Talks To Raise $30 Mn In Series B

Arkam Ventures’ Bala Srinivasa on the parameters he checks while investing

This edtech startup prepares youngsters for government and competitive exams