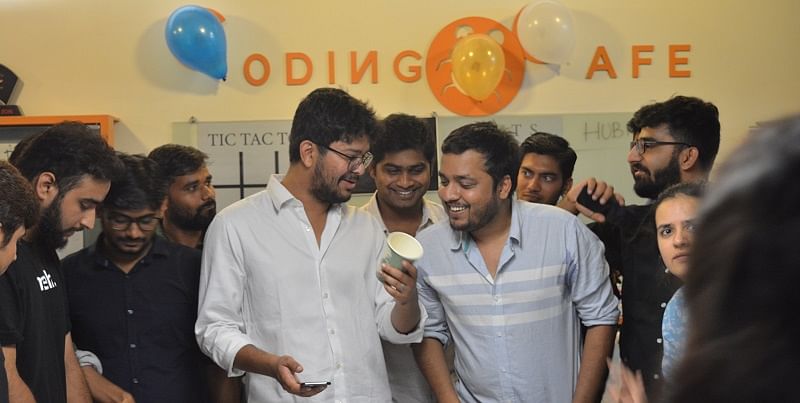 Last year, as the COVID-19 pandemic struck, physical events came to a standstill. When that happened, event management platform Hubilo, which had earlier clocked Rs 8 crore in revenue, began running out of money. Founders Vaibhav Jain and Mayank Agarwal had to take a quick stock of things.

“There was a point last year where we were at zero revenue; this was during the onset of the pandemic,” says Vaibhav. “Back then, we had two options: shut down our operations or let go of all our 30 employees. I had already started working on a fintech startup idea and come up with something innovative to survive.”

Vaibhav gave his technology team a goal to build a simple platform in 30 days. And there was one silver lining: Hubilo was already signed up and committed to a project for a software services company.

Today, Hubilo is a recognised platform for high-end virtual corporate events and trade shows, having hosted more than a million attendees without the all too common screen fatigue.

According to its founders, month-on-month revenue has consistently grown by over 50 percent since enrolling the first customer on the virtual events platform in April.

However, Hubilo was still not out of the woods in July 2020. The startup needed the venture capital industry to bet on its technology and the new normal. The founders tried to convince potential investors that the United Nations, Fortune, trade expo GITEX, drug firm Roche, and Informa Markets were using Hubilo’s digital events platform.

After talking to more than 25 funds that rejected anything to do with digital events, the founders approached Lightspeed Venture Partners, which believed in their idea.

Last month, the startup raised $23.5 million in a Series A round led by Lightspeed and Balderton Capital.

“The pandemic forced us all to transition to a virtual platform and it continues to do so,” says Vaibhav. “Initially, the major concern was the necessary engagement rate in virtual events (external and internal). We believe we have delivered the required solution on our platform by integrating several technological tools.”

According to the founders, at a broader level, everyone is beginning to understand the value of holding virtual events and also recognising how insights and event analytics are critical to making more informed business decisions. Hence, they say companies are reworking their budgets to incorporate more virtual events in their planning for the year.

Also, enterprises have realised that vis-à-vis physical events, virtual ones can be conducted on a larger scale, require less workforce and resources, are cost-effective, and with the right marketing strategy, they offer 100 times add-on value, say Hubilo’s founders.

“It is a huge acknowledgement and affirmation of our belief in becoming the category leader in the events industry,” says Vaibhav. “We are immensely thankful to our first institutional backer, Hemant Mohapatra at Lightspeed Venture Partners India, for being an integral part of Hubilo and helping us grow at the pace we have in just three months.”

The primary reason behind Hubilo’s virtual events success was technology and its evolution.

“It began as a simple platform where we tried to replicate some basic features of physical events,” says Vaibhav. “Our pre-COVID-19 experience helped us install features like networking, navigation, automated registration, and ticketing processes.”

At present, he says the platform is integrated with enterprise software like video technology stack, data integration stack, event stack, and features such as extensive branding and custom content management systems options for enterprises, real-time analytics and insights, and integrated multilingual and time zone capabilities.

Vaibhav says the startup will add some more features such as multi-event analytics, native integrations with customer relationship management and other applications, and sponsored ads.

Over the next few months, the platform plans to roll out Hubilo 2.0, which would be integrated with additional features that will enable stronger attendee engagement and new monetisation opportunities for organisers, he says.

The startup is also creating a “system of record” for virtual events that will facilitate attendee engagement through gamification and also provide insights to event organisers, exhibitors, and sponsors via deep integrations with Marketo, Salesforce, HubSpot, and others.

Hubilo is set to build its new headquarters in San Francisco with Vaibhav planning to move there in May. The startup’s global heads of sales and marketing will be based in the US with an extensive team. A team will continue to be based in Ahmedabad.

The platform is also acquiring office space in London and will build a go-to-market team in Europe. It also intends to further tap into markets in the Asia-Pacific region, West Asia, and Africa. All this will take place alongside the launch of Hubilo 2.0.

The virtual events market is expected to grow by $269.20 billion during 2021-25, albeit decelerating at a CAGR of 33 percent, according to a report earlier this year by consulting firm Technavio.

“We foresee a hybrid model, where the same event will be held virtually and physically, simultaneously, and both will generate revenue as per their individual return on investment,” says Vaibhav.

He declines to disclose the revenue for the current fiscal, but says he is confident that Hubilo can become the de-facto platform for virtual events.

Indian Startups Receive $2.6 Bn in Funding In April, Lowest in 2022

The Research and Development Tax Credit: A Comprehensive Guide