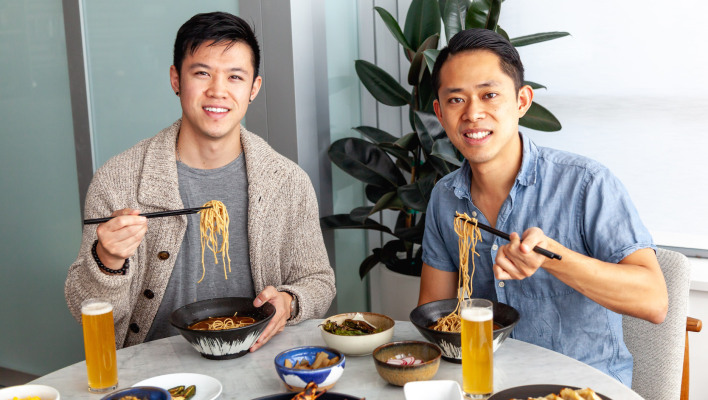 Immi is putting a healthy spin on instant ramen by going plant-based and offering more bold tastes. The company announced Tuesday that it raised $3.8 million in seed funding.

Co-founders Kevin Lee and Kevin Chanthasiriphan both grew up in food families from Taiwan and Thailand, respectively, and met a decade ago while working at the same tech company. They bonded over getting noodles every day.

Fast-forward to today, and they both saw family members stricken with diabetes and high blood pressure and started thinking about what a better-for-you food and beverage brand would look like.

Taking the love of the Asian food they grew up with, they wanted to develop one of those brands for the U.S.

“We immediately agreed on instant ramen,” Chanthasiriphan told TC. “My dad still eats instant ramen each night, and it is such a massive market: 4 billion packets are sold per year, but it is also a product that has been dominated by the same three incumbents for years.”

The global instant noodle space is projected to be a $32 billion industry by 2027, with $7.7 billion of value in the U.S. However, the ramen most people buy in the grocery store includes noodles made of refined carbohydrates that get cooked in oil, while the soup packets are high in sodium and preservatives, he said.

Their take on it is Immi, which is plant-based, low carb and low sodium, high fiber and has 22 grams of protein on average. The product comes in three flavors — Black Garlic “Chicken,” Tom Yum “Shrimp” and Spicy “Beef.”

The pair went into the company full-time in 2019 and have spent the better part of the last few years heads down in R&D, but the finished product didn’t come easy. In fact, when speaking with people in the industry, they were told that creating a healthier version of ramen would be “kind of impossible,” Lee said. They had to start from the ground up and make it themselves, formulating the first recipes in their own kitchens. 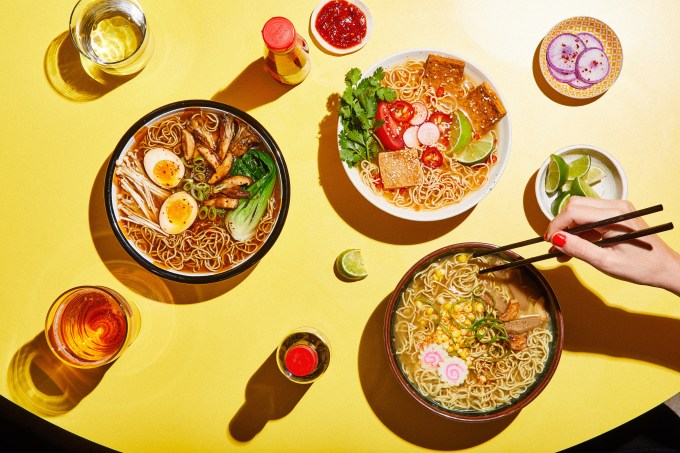 The funding raise comes as Immi releases a reformulation of their product this year aimed at replicating traditional instant ramen in broth taste, mouthfeel, texture and slurpability.

Melissa Facchina, co-founder and general partner at Siddhi Capital, said her firm invests in food and beverage brands and its investment arm is a mentor to the Immi team.

“We were blown away by them,” she said. “It costs a lot of money to innovate in this industry, and it is exciting for myself and family to have something that we can grab and go. The second version launching looks exactly like the traditional brick pack and now has adult flavors that attach to a different culinary pallet.”

The natural or better-for-you foods industry has changed “dramatically” in the last decade,  Facchina said. Most of it is driven by consumers that want transparency in the supply chain, cleaner ingredients and authentic brands.

Consumer packaged goods brands that are reinventing themselves already have successful product lines, but few brands are taking a look at certain categories she said are ripe for reinvention, like cereal. Her firm is an investor in Magic Spoon, and she sees Immi reinventing ramen and Asian cuisine, saying “the Kevins as a founder group are highly moldable, high-achieving and want to surround themselves with best-in-class people.”

Meanwhile, the new funding will be split between R&D, hiring and marketing, Lee said. The company is taking in customer feedback to enhance the flavors, and would like to optimize its supply chain, hire for key executive roles and put spending toward testing new marketing channels. Immi sells its product via its own online store, but would like to expand into wholesale channels and online grocers.

Immi’s products were launched in January and saw inventory sell out in the first month without any marketing. They have since sold over 10,000 orders across the U.S. and are even looking to go international.

Going forward, the company will be working on two initiatives: The first is to develop an infrastructure to expand its product offerings, like more flavors and noodle types, so it can launch a new flavor every few months. Lee and Chanthasiriphan also aim to develop additional Asian food products that have cleaner ingredients, like snacks and confections, that they loved eating when they were children.

The second is marketing and distribution. The company has amassed a community of 4,000 members that help Immi with rapid taste testing.

“We are figuring out how to bring our products to a more mainstream audience, especially those that may not be following a certain diet, but want to bring in food and beverages that are healthier,” Lee said. “We are also bringing in taste makers of culture, celebrities and TikTok influencers to broaden consumer interest and bring Immi into the mainstream cluster.”

Everyone is raising money at the same time – TechCrunch

How Restaurant Owners Are Fighting Back The Dominance Of Foodtech

How to Find Image Sources For Proper Attribution or Research

B2B sales platform Accord adds $1M to seed round – TechCrunch