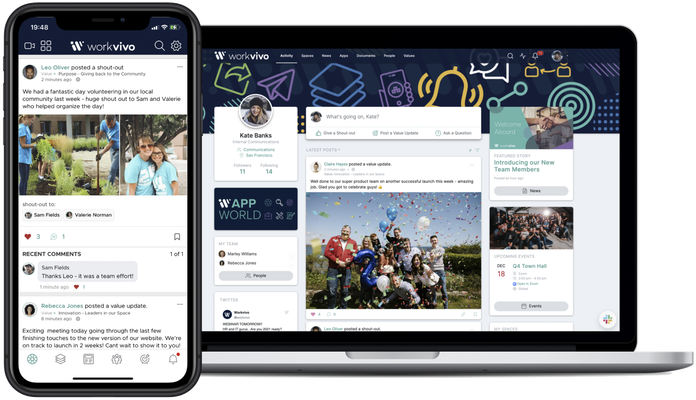 Maintaining company culture when the majority of staff is working remotely is a challenge for every organization — big and small.

This was an issue, even before COVID. But it’s become an even bigger problem with so many employees working from home. Employers have to be careful that workers don’t feel disconnected and isolated from the rest of the company and that morale stays high.

Enter Workvivo, a Cork, Ireland-based employee experience startup that is backed by Zoom founder Eric Yuan and Tiger Global that has steadily grown over 200% over the past year.

The company works with organizations ranging in size from 100 employees to over 100,000 and boasts more than 500,000 users. According to CEO and co-founder John Goulding, it’s had 100% retention since it launched. Customers include Telus International, Kentech, A+E Networks and Seneca Gaming Corp., among others.

Founded by Goulding and Joe Lennon in 2017, Workvivo launched its employee communication platform in mid-2018 with the goal of helping companies create “an engaging virtual workplace” and replace the outdated intranet.

“We’re not about real time, we’re more asynchronous communication,” Goulding explained. “We have a lot of transactional tools, and typically carry the bigger message about what’s going on in a company and what positive things are happening. We’re more focused on human connection.”

Using Workvivo, companies can provide information like CEO updates, recognition for employees via a social style — “more things that shape the culture so workers can get a real sense of what’s happening in an organization.” It launched podcasts in the second quarter and livestreaming in Q4.

In 2019, Workvivo showed its product to Zoom’s Yuan, who ended up becoming one of the company’s first investors. Then in May of 2020, the company raised $16 million in a Series A funding led by Tiger Global, which is best known for large growth-oriented rounds.

Workvivo, which was built out long before the COVID-19 pandemic, found itself in an opportune place last year. And demand for its offering has reflected that.

“Since COVID hit, growth has accelerated,” Goulding told TC. “We grew three times in size over where we were before the pandemic started, in terms of revenue, users, customers and employees.”

The SaaS operator’s deals range from $50,000 to close to $1 million a year, he said. Workvivo is Europe-based and operates in 82 countries. But the majority of its customers are located in the U.S. with 80% of its growth coming from the country.

The startup opened an office in San Francisco in early 2020, which it is expanding. Thirty percent of its 65-person team is currently U.S.-based, with some working remotely from other states.

While Workvivo would not reveal hard revenue figures, Goulding only said it’s not seeking additional funding anytime soon considering the company is “in a very strong capital position.”

To tackle the same problem, Microsoft last month launched Viva, its new “employee experience platform,” or, in non-marketing terms, its new take on the intranet sites most large companies tend to offer their employees. With the move, Microsoft is taking on the likes of Facebook’s Workplace platform and Jive in addition to Workvivo.

Despite the increasingly crowded space, Workvivo believes it has an advantage over competitors in that it integrates well with Slack and Zoom.

“We’re sitting alongside Slack and Zoom in the ecosystem,” Goulding said. “There’s Zoom, Slack and us.”

Slack is real-time messaging and what’s happening in the immediate future, and Zoom is real-time video and “about the moment,” he said.

To Goulding, Microsoft’s new offering is unproven yet and a reactionary move.

“It’s obvious there’s a battle to be won for the center of the digital workplace,” he said. “We’re here to capture the heartbeat of an organization, not pulses.”

Everyday Sexism: The Challenges for Women in STEM