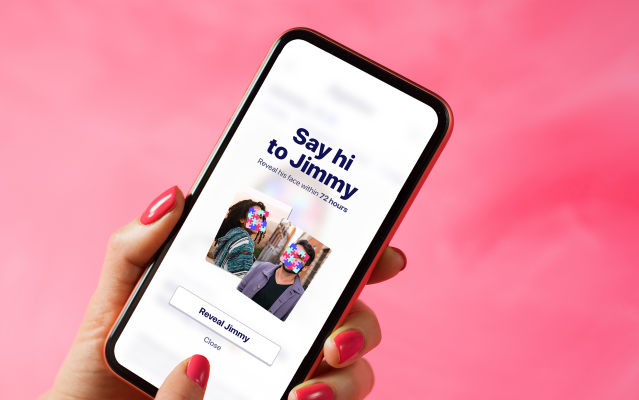 Chalk one up for Jigsaw, an “anti-superficial” dating app that has scored £2.7 million ($3.7 million) in seed funding to put toward U.S. expansion. The round is led by a lead generation company for online dating companies, called The Relationship Corp., with backing from angel investors in the U.S. and U.K. “primarily” in the tech sector.

As the startup’s name suggests, Jigsaw adds a little cryptic fun to the transactional business of swiping photos of other singles in search of dating chemistry in a bid to offer a less superficial experience.

Albeit their (patented) anti-superficial twist looks a tad gimmicky at first blush: They literally superimpose a digital jigsaw over the faces of users, with pieces removed gradually the more you interact — and the full face only revealed after a pre-set amount of in-app engagement.

Digital filters are also banned, per the app’s FAQ; they only want “real” selfies. So no cute cat ears, etc.

They’ve got a few more tricks up their sleeve but don’t want to offer a public reveal of the planned features we guessed were coming just yet (but, well, a quick glance at the app and it’s basically a half finished jigsaw puzzle of their product roadmap).

The U.K. startup — which was founded back in 2016 by a couple of friends, Alex Durrant (co-founder and CEO) and Max Adamski (co-founder and CPO), when they were at university (and finding the dating app scene frustratingly superficial, as they tell it, going on to quit their jobs and go all in on the project in 2018) — launched its puzzle-faced dating experience in London in 2019; and opened up to the U.S. in November last year.

Jigsaw has some 150,000+ registered users across those two markets at this point, with 50,000 in the U.S. — and an appetite to step things up over the pond now that they’re flush with new funds.

Durrant says the team is hoping to hit half a million U.S. users in the next six months. They reckon there’s a trend toward less superficial swiping in the American dating app scene that Jigsaw is well-positioned to tap into.

“We’re not insane and think people look better with puzzles over their faces, I promise, the puzzle is our middle finger to the superficial dating industry,” he says. “It exists as you say to encourage more meaningful/sustained interactions and to help users look beyond the looks.”

Currently, Jigsaw’s face-shielding mechanism involves a puzzle made up of 16 pieces. All photos start with one piece removed “so you get a sneak peek”. Another then comes off when a user likes (matches with) the person so at the start of chatting there are two pieces revealed.

More pieces are removed as the pair mutually exchange messages until there’s no more puzzle bits left. Hopefully you also won’t run out of conversation at that point.

“Over six messages each (12 in total) is what we believe is the minimum needed for a meaningful conversation,” says Durrant. “That’s why the jigsaw puzzle currently unveils fully after seven messages are exchanged (14 pieces revealed in total), revealing the face underneath. This number has been tested and this is the current sweet spot for our users.”

Jigsaw isn’t unique in the concept of shielding facial visuals to encourage dating app users to do more chatting and less mindless swiping. There are a whole bunch of “slower reveal” style twists aimed at reducing “dating app fatigue” — as another app, INYN, which also limits the velocity of the profile reveal, puts it.

Another app which blurs users’ photos until they do some chatting is Taffy. There’s also Muslim matchmaking app Veil — which offers a “digital veil” feature (aka an opaque filter) that it applies to all profile photos, male and female, until a mutual match is made.

Other “anti-superficial” dating apps, like Willow, try a Q&A style approach — getting users to answer questions to see more photos. The list goes on.

Still, Jigsaw has come up with perhaps the most visually obvious (and gamified) twist on this slow-reveal format. And being so immediately, well, obvious, it might make its “slow reveal” twist stick for longer than the average “love is blind” alternative dating app.

Its seed investment is not about buying users, either. We made sure to check.

The Relationship Corp. does offer user acquisition/traffic generation services to dating apps — including those it invests in — but in Jigsaw’s case the investment is a straight equity investment, per Durrant. So it’s at least sounding confident in its ability to grow.

“They’re super low-key but are known in the industry,” says Durrant of the lead seed investor. “Steve Happas their CEO is ex-Match and… sits on our advisory board [as part of the investment]. We had an option to work with them to acquire users but instead, they are supporting our internal team in an advisory capacity.”

New laptops, the M2 chip, and the other big announcements from Apple’s WWDC