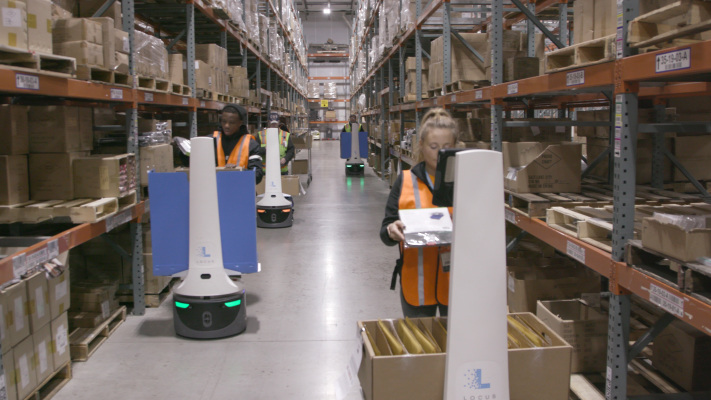 Massachusetts-based Locus Robotics today announced a $150 million Series E. The round, led by Tiger Global Management and Bond, brings the firm’s total to around $250 to date, and values the robotics company at $1 billion. Locus is notable for a more modular and flexible solution for automating warehouses than many of its competitors (see: Berkshire Grey). The company essentially leases out robotic fleet for organizes looking to automate logistics.

“We can change the wings on the plane while it’s flying,” CEO Rick Faulk tells TC. Basically no one else can do that. Companies want flexible automation. They don’t want to bolt anything to the floor. If you’re a third-party logistics company and you have a two, three, four-year contract, the last thing you want to do is invest $25-$50 million to buy a massive solution, bolt it to the floor and be locked into all of this upfront expense.”

The company currently has some 4,000 robots deployed across 80 sites. Roughly 80% of its deployments are in the U.S., with the remaining 20% in Europe. Part of this massive funding round will go toward expanding international operations, including a bigger push into the EU, as well as the APAC region, where it presently doesn’t have much of a footprint.

The company will also be investing in R&D, sales and marketing and increasing its current headcount of 165 by 75 in the coming year.

The pandemic is clearly a driver in interest around this brand of automation, with more companies looking toward robotics for help.

“COVID has put a spike in the growth of online ordering, clearly, and that spike is probably a four to five year jump,” says Faulk. “If you look at the trend of e-commerce, it’s been on a steady upward tick. It was about 11% last year and COVID put a spike up to 16/17%. We think that genie’s out of the bottle, and it’s not going back any time soon.”

The funding round also points to a company that seemingly has no desire to be acquired by a larger name, akin to Kiva Systems’ transformation into Amazon Robotics.

“We have no interest in being acquired,” the CEO says. “We think we can build the most and greatest value by operating independently. There are investors that want to invest in helping everyone that’s not named ‘Amazon’ compete.”

The Startup Magazine How to Overcome Your SPAC’s Biggest Challenges

Should we be growing trees in the desert to combat climate change? – TechCrunch

Chennai’s rise as a startup hub

Does SoftBank have 20 more DoorDashes? – TechCrunch