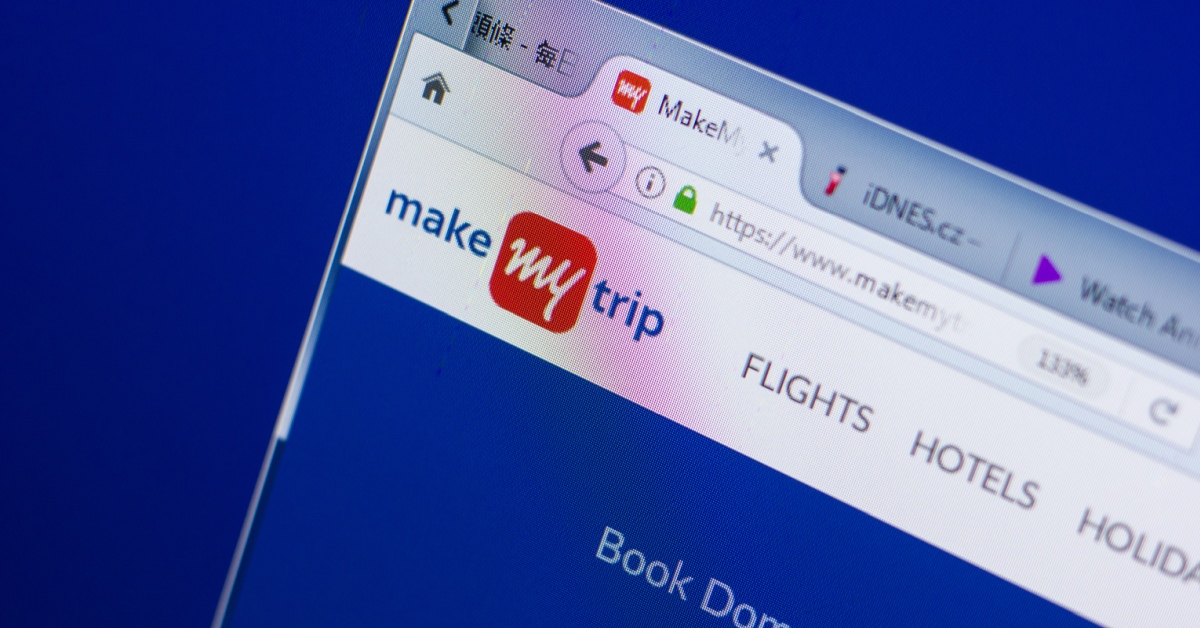 Interestingly, the company had seen revenue pick up in Q4 2021, before the Covid second wave resulted in a number of lockdowns across India once again in April

The company’s marketing and sales promotion expenses decreased by 56.5% to $11.8 Mn in the quarter

Gurugram-based online ticketing giant MakeMyTrip has reported revenue of $163 Mn in fiscal year 2021 (FY21), ending March 30, 2021, a massive decline of 68% from the previous year, as the pandemic wreaked havoc on the company’s financial performance, just like in other online travel and hospitality ticketing platforms. In comparison, the company had reported $511 Mn in revenue in FY20 last year. The impact from the pandemic and the various global lockdowns last year is clear when you see that the company’s revenue has fallen for all channels when compared to Q4 2020, even as expenses have also been curbed significantly. 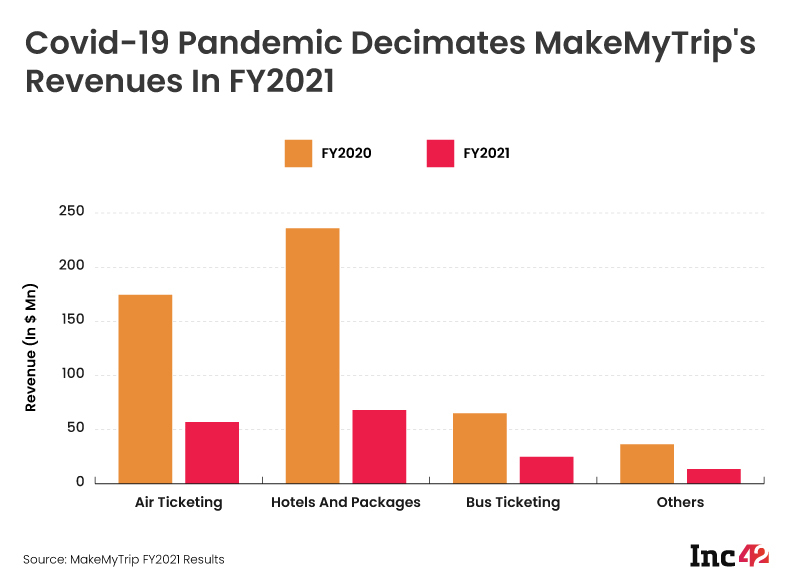 In terms of the breakdown of revenue, the online travel agency (OTA) said that air ticketing revenue improved to $24 Mn in the quarter, just under a third of the total earnings. MakeMyTrip (MMT) had reported $18 Mn in revenue from the same vertical in the previous quarter.  The largest contribution to the quarterly revenue was from bookings of hotels and packages, which grew to $38 Mn in Q4 compared to Q3’s $24 Mn.

Interestingly, the company had seen revenue pick up in Q4 2021, before the Covid second wave resulted in a number of lockdowns across India once again from April 2021. As a result, travel restrictions are once again in place, with leisure and business travel also slowing down. In light of this, MakeMyTrip had said it is prepared for the worst, at least in terms of its railway and hotel booking offerings. 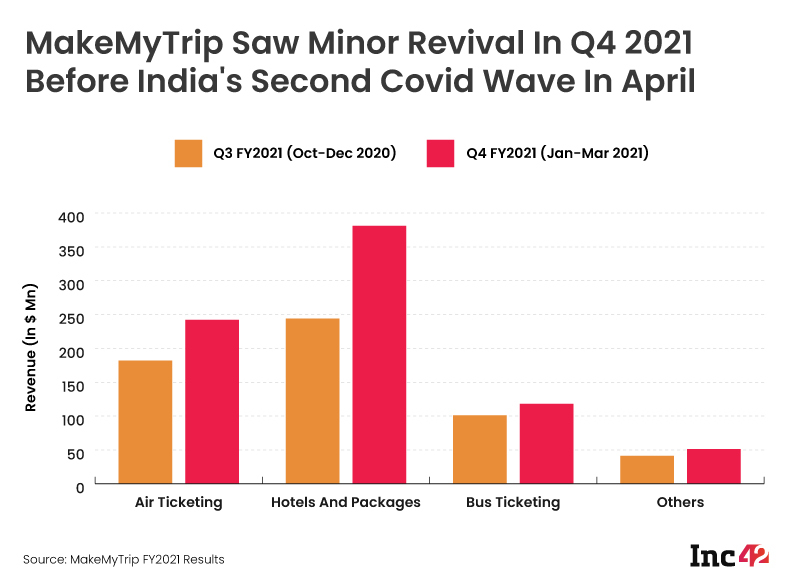 The company’s COO, Vipul Prakash told Inc42 last month that it has recently introduced a free cancellation policy for railway travels that allows a passenger to avail a full refund in case the customer cancels the ticket before chart preparation. Besides this, it is also offering free cancellation and 100% refund on the majority of hotel properties.

Among the areas where the company reduced its spending, the marketing and sales promotion expenses decreased by 56.5% to $11.8 Mn in the quarter. The marketing expenses saw a dramatic fall of 86% for the full fiscal year to a mere $22.7 Mn from $166 Mn in FY2020. In fact, the company trimmed its costs across the board to cut down its losses significantly. The massive impact from the pandemic which resulted in zero revenue between April and June 2020 also meant that the company did not have to spend as much to provide its services. 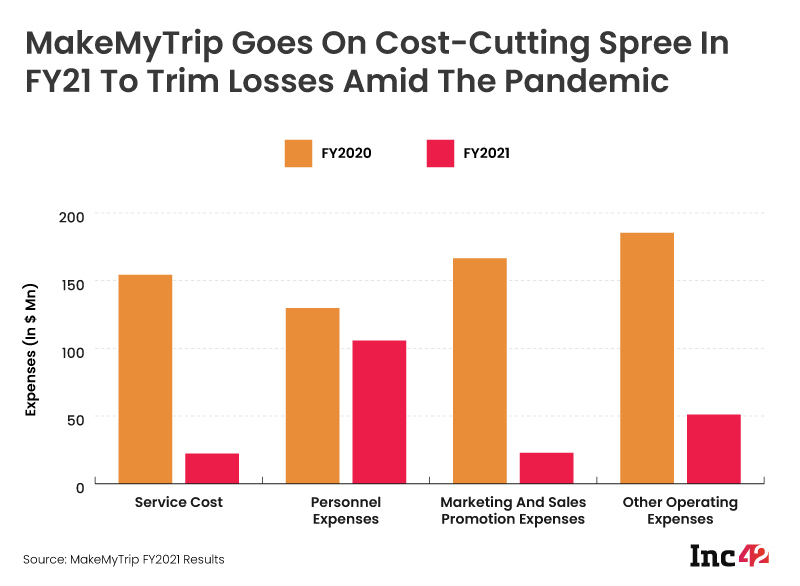 Post the quarterly and annual results announcement, MakeMyTrip’s shares were trading at 5% higher immediately afterwards, with the price now 2.3% higher than when it opened earlier in the day. In a statement, Deep Kalra, group executive chairman of MakeMyTrip, said, “MakeMyTrip continued to leverage the domestic travel recovery momentum for most part of the reported fiscal fourth quarter. The company also bolstered its liquidity with a convertible note issuance.”

He added that the company is well positioned to emerge as a stronger player in India’s travel market post the pandemic with a focus on cost discipline.

“We currently expect the impact of the second wave of COVID-19 pandemic on our financial results to be greater in the first quarter of the fiscal 2022 year as several state governments in India have imposed lockdowns and travel demand has been significantly impacted during April and May 2021.” – MakeMyTrip’s Q4 FY2021 Results

In February, MMT announced that it is looking to raise $200 Mn in debt through senior convertible notes at an aggregate principal amount of 0% rate, due till 2028.  It said it will be using the capital from the notes for business operations and for employee salaries after a tough 2020.

The sale of the convertible notes to the initial purchasers is expected to settle on February 9, 2021, estimated to touch $223.7 Mn, if all the notes are purchased at full capacity. Further, MakeMyTrip said that notes offering was upsized by $25 Mn from the previously announced amount of $175 Mn. For the initial purchasers, the company has granted a 30-day option to purchase up to an additional $30 Mn in aggregate principal amount of the notes.

Ecovative sees a fungal future for fashion, food and foam packaging and has a fresh $60M to make it – TechCrunch

Sohna – Emerging into a Gold Mine for Luxury Real Estate Hub

AddWeb Solution: No.1 Drupal Development Agency in The Industry?