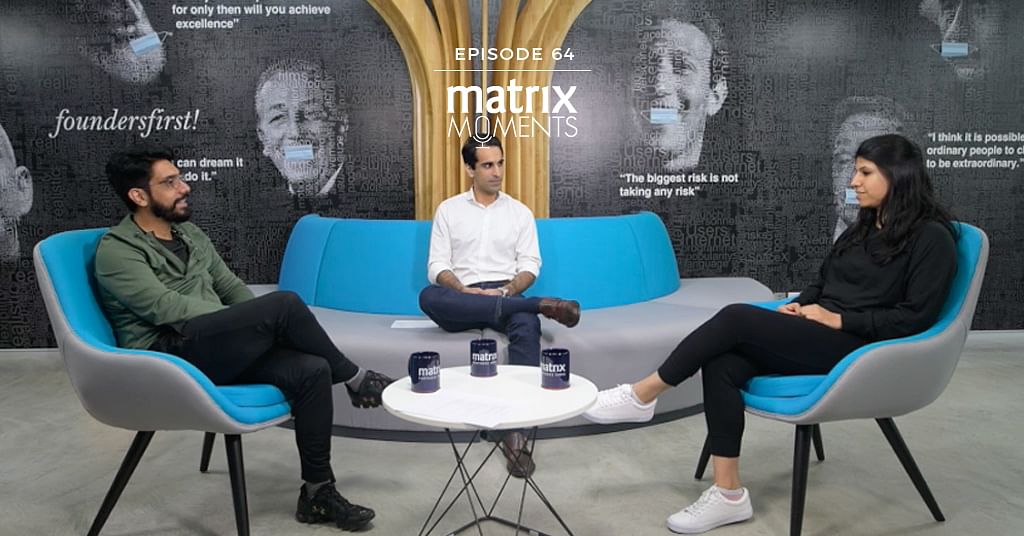 Aarti Gill and Mihir Gadani started OZiva, a plant-based nutrition brand, in 2016. However, her entrepreneurial journey began in 2013, she tells in an episode of Matrix Moments.

“I was born and brought up in Chandigarh. My mother comes from a healthcare background, but since I was good at Mathematics, I ended up going to an IIT. And following the cookie-cutter mode, I went to work for a startup in Bengaluru in the analytics space,” Aarti tells Sanjot Malhi, Director, Matrix Partners India.

Aarti, like many other engineers, went on to pursue an MBA. But, she soon realised that if she were to start her own business, it’s either now or it would never be.

“While I had seen healthcare throughout my childhood, the preventive healthcare space excited me,” she shares.

She met Mihir in Mumbai, who comes from a biotech and life sciences background, and has been interested in the fitness and health space. The duo met, and through an exchange of ideas, they decided to start OZiva.

“It took us almost two and a half, three months to come to this whole thing – a lot of brainstorming sessions, café sessions, with a lot of people,” says Mihir.

Aarti explains if you look at preventive healthcare, there are three key pillars. First, we believe, you need to eat clean. Second, you need to focus on your physical wellness.

“And, if you want to reap the benefits of the first two, you need to be mentally healthy and stress-free. I think that’s where predominantly the thought process was when we started building this company — how can we empower more and more people to be healthier and better,” Aarti adds.

The duo thought of multiple business models and brand names. Initially, the team was into health and fitness services — they were doing diet consolation, marathon training, and providing different consultations services. “We realised, why not focus on one pillar at a time and then craft it end-to-end,’ she says.

“But, this is easier said than done. People try to mingle both the things; food and nutrition is not the same thing. You might be eating good food but that doesn’t mean you get the right macro-micro nutrients that the body requires,” she adds.

At first, the team was recommending other brands to its customers, but they also reached a point where they thought if something is worth recommending?

“The products and the brands available in the nutrition space have a lot of artificial chemicals and ingredients. So, we realised there is a need to build something which the country doesn’t have today. But, I think people need to eat something clean and safe for their body. Which is where OZiva came into the picture,” Aarti says.

Recollecting their interaction with OZiva, Sanjot says, “I remember, where I had to chase you and you weren’t taking my calls, and I had to really convince you to speak with us.”

Most entrepreneurs in the early stages assume that businesses can be built only with money. While the co-founders, too, thought the same, after knocking on a couple of doors, they realised something wasn’t matching.

“We weren’t able to raise capital in the initial days, and which is when we realised that why to focus on money first, let’s try and solve the problem. And, in the next two to three years, we just dedicated ourselves to solving the problem. We had a conviction that there is a problem that lies there, where everybody else in the initial years was saying that nutrition, a vitamin-minerals category, is not a must-have,” Aarti explains.

The startup ended up raising debt funding in the initial days. “We grew it slowly, but I think that’s what worked in our favour. In the initial days, we figured out the right business model and the right kind of products that speak to the consumers. We just focused on consumers so much that we were obsessed with them. Even today, we think of what the consumer really needs,” Aarti says.

Speaking about choosing Matrix Partners India, Aarti says, “Your thesis in the space was clear, and what the market potential would be. So, it was in your words, as you say, the marriage of the two minds.”

Sanjot adds, “The customer love was really exceptional, and so I would say, the decision was very easy, and the excitement was there for sure. But broadly, I think the thesis on nutrition for us is one of solving a core issue in India. India is one of the lowest penetration countries in terms of both vitamins and protein, and is a large category even by today’s standards — it is $2.5 billion, and growing very quickly.”

Budget 2022 is a truly inclusive push towards taking economy to 9.2 pc GDP growth

Will COVID-19 will bring edtech closer to overcoming the challenges of virtual schools?