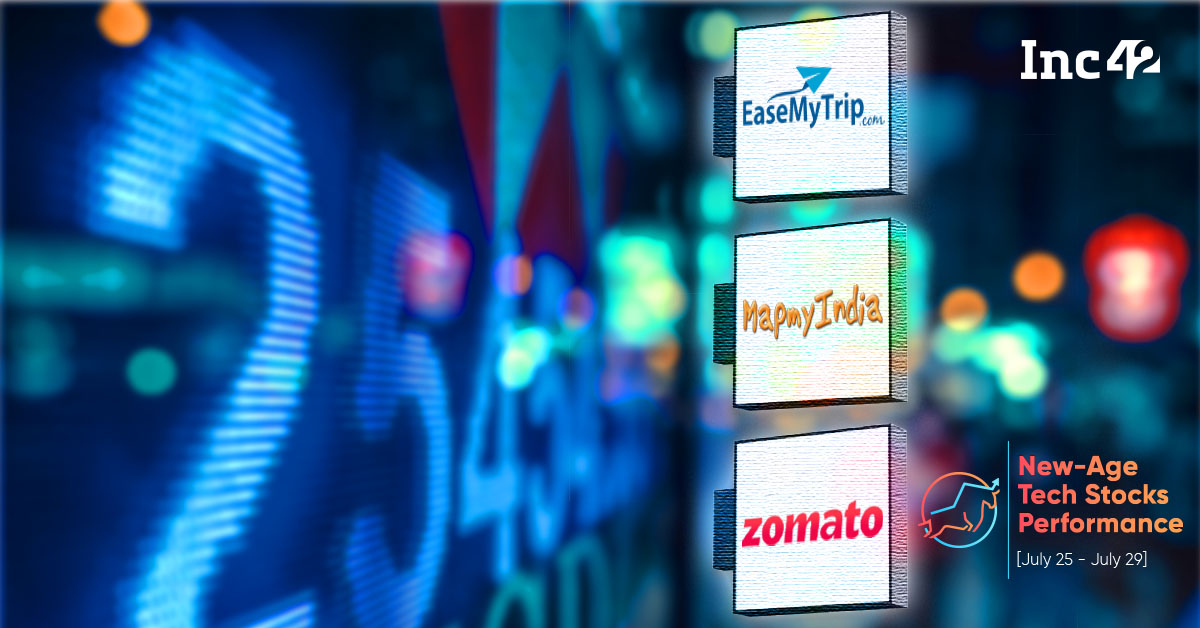 From MapmyIndia, Policybazaar, and Paytm to the troubled Zomato, most of the listed startup shares fell between 3% to 15% this week

Shares of EaseMyTrip ended over 5% higher as the startup reported doubling of its profit to INR 33.7 Cr during the June quarter

While the overall Indian equity market ended on a positive note this week, a majority of the new-age tech stocks were under stress, falling significantly on a week-on-week basis.

From MapmyIndia, Policybazaar, and Paytm to much-strained Zomato, shares of most of the listed startups fell between 3% to 15% this week. This was in contrast to the last week when a majority of them had gained.

Paytm shares closed about 9% lower this week on the BSE. While several brokerages, including Goldman Sachs, expressed their confidence on the company’s profitability path, many analysts continued to differ. On Friday, it closed 5.7% lower from Thursday’s close at INR 674.75.

On the other hand, the free-fall of Zomato shares gained momentum this week as the lock-in period for the promoters, employees, founders, among others, for selling shares ended.

Policybazaar was the next biggest loser among the 11 new-age tech stocks with a 10% fall on the BSE on a weekly basis.

However, EaseMyTrip continued its rise, ending the week with over a 5% gain on the BSE. Similarly, shares of IndiaMart and Fino Payments also rose on a week-on-week basis.

Let’s take a deeper look into the performance of the new-age tech stocks from the Indian startup ecosystem on the Indian stock exchanges this week and the key trends: 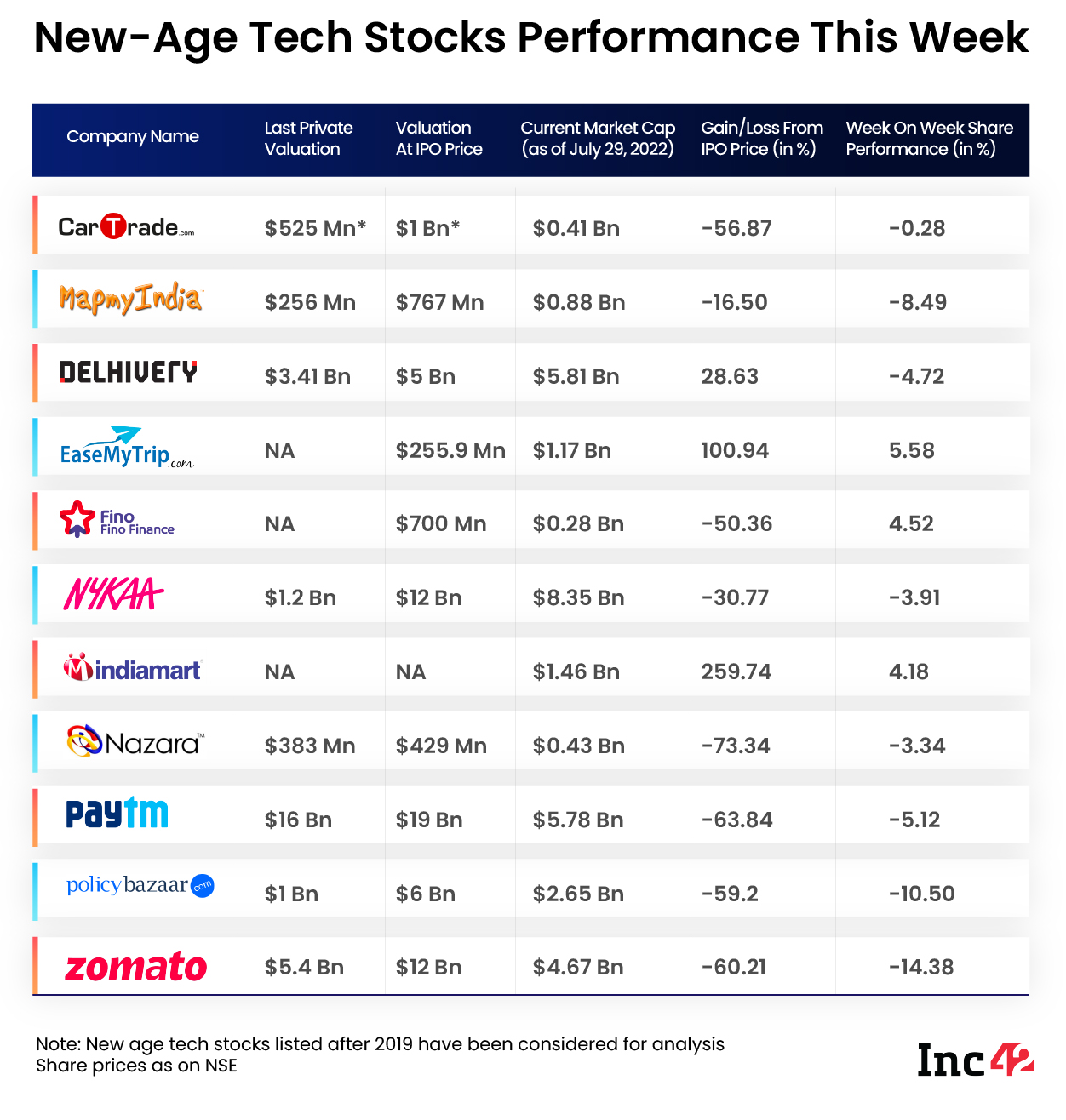 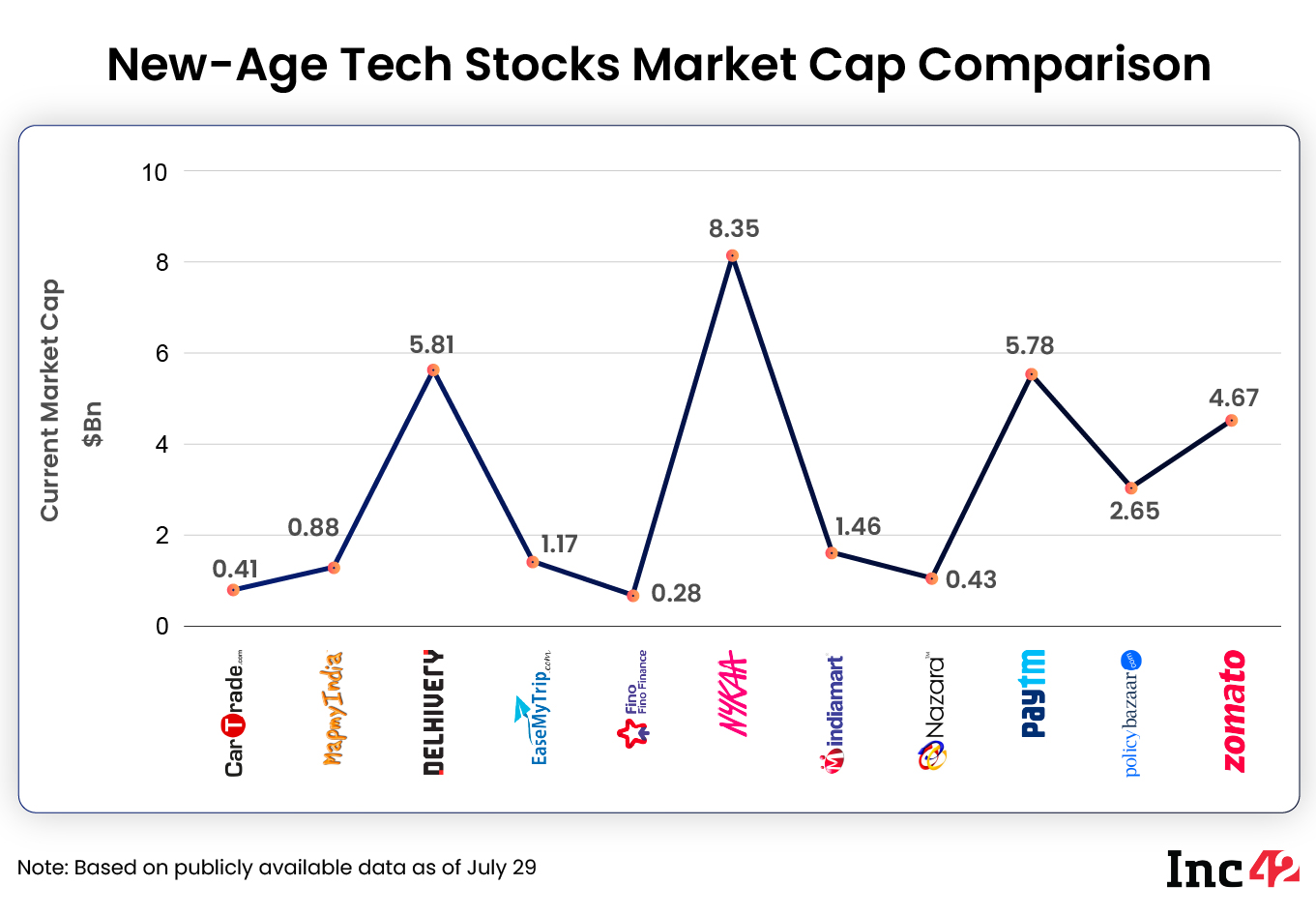 After witnessing an over two-month high at the beginning of July and continuing the momentum for two weeks, shares of MapmyIndia parent C.E. Info Systems fell over 8% this week, ending Friday’s session at INR 1,316.9 on the BSE.

The shares fell sharply on Thursday and Friday after the company announced launching its 360-degree Panoramic Street View and 3D Metaverse Maps Service in India, which coincided with Google Map’s Street View launch in the country.

“MapmyIndia’s significant runway for growth still exists. While it awaits to be seen how Google Maps getting aggressive in capturing the Indian market affects the company, MapmyIndia is the largest player in India owing to its already-existing extensive database, which gives them an upper hand in the country,” said Jain.

Meanwhile, the stock is expected to remain range-bound in the coming days, Mehul Kothari, AVP of technical research at Anand Rathi, said. It will face resistance at INR 1,400 to INR 1,450 levels, while support is seen at INR 1,250, he added.

Founded in 1995, digital mapping company MapmyIndia got listed on the Indian stock exchanges in December last year, riding the wave of liberalisation of geospatial policies in the country. The shares listed at a premium of over 51% at INR 1,565 per share on the NSE. On the BSE, they made debut at a 53% premium to its listing price at INR 1,581 per share. 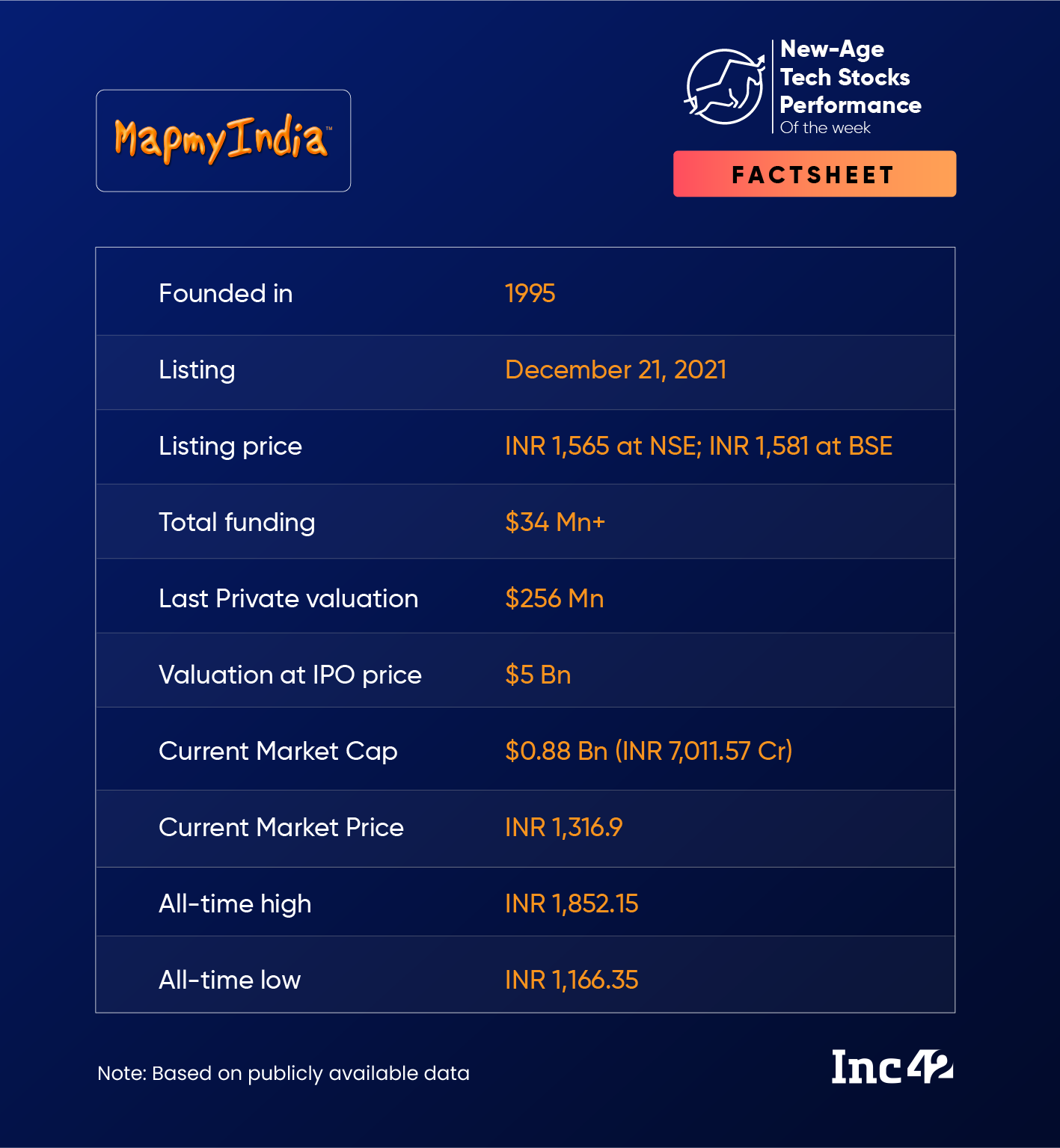 EaseMyTrip’s parent brand Easy Trip Planners saw an overall positive momentum in its stock this week, which was partially supported by the expected positive June quarter results and the continuing positive sentiment in the travel sector.

After gaining 7.4% over the last week, EaseMyTrip’s shares gained further this week to end 5.3% higher at INR 425.6 on the BSE. If the upward momentum continues next week, the shares can touch their all-time high of INR 459.2 seen in May.

EaseMyTrip reported an overall good result for the June quarter on Friday after market hours. Its consolidated profit after tax (PAT) more than doubled to INR 33.7 Cr, while adjusted revenue surged 169% year-on-year (YoY) to INR 131.5 Cr in Q1 FY23.

Rahul Dani, research analyst at Monarch Networth Capital, said that given the promising numbers reported by EaseMyTrip, its shares may see a positive reaction on the street next week.

Meanwhile, Anand Rathi’s Kothari said, “For over a year or so, we have been constantly bullish on the stock. In fact, in today’s session, it has confirmed a fresh breakout from the 420 mark. So, we feel there is a possibility of 450 to 460 upside level in the coming week. Support for the stock is at 400 for the coming week.”

Founded in 2008 by Nishant Pitti, Rikant Pitti and Prashant Pitti, EaseMyTrip made its debut on Indian stock exchanges in May last year. The shares listed at INR 212.25 on the NSE, at a premium of 13.5% over the issue price, and at INR 206 on the BSE, a premium of over 10%. At current levels, the shares are up over 100% from their listing price. It was an eventful week for Zomato shares on the stock exchanges. While the foodtech startup’s shares have been on a downward spiral ever since it announced acquisition of Blinkit in June, the stock witnessed massive selling this week as the lock-in period for its pre-IPO investors ended.

Zomato shares hit an all-time low at INR 41.65 on Tuesday (July 26). However, the stock recovered a little in the later part of the week, ending Friday’s session at INR 46.85, up 2.6% from Thursday’s close on the BSE.

On a week-on-week basis, Zomato shares ended over 12% lower.

In further bad news for the investors, valuation guru Aswath Damodaran cut his price for Zomato shares, assigning a new base case value of INR 35.32 as against INR 41 earlier.

On the other hand, venture capital firm Moore Strategic Ventures sold its entire holding of 4.25 Cr shares in Zomato at INR 44 apiece.

Meanwhile, international brokerage Jefferies came out with a positive report on Zomato shares this week. Jefferies’ analysts said that the current selling poses a great case for long-term investors to buy the stock. The brokerage maintained its ‘buy’ rating and a price target of INR 100 on Zomato shares.

Zomato listed on the BSE and the NSE in July last year at INR 115 and INR 116 per share, respectively. At the current levels, the shares are trading over 60% below their listing price.

Anand Rathi’s Kothari told Inc42 that there are no visible signs of a reversal in Zomato shares on the technical charts.

“Since the last three to four trading sessions, the stock is hovering between 40 to 45, and in this zone, we are witnessing exceptional volumes, which indicates there is a possibility of some kind of accumulation in the stock,” said Kothari.

“Having said that, in the coming week, we might see some kind of trading bounce in the stock but for an investment purpose, it is a complete ‘No’ because unless we see some kind of higher top and higher bottom formation, at least on a weekly scale, we cannot talk about an investment in the time frame of six months or one year,” he added. Reasons Your Warehouse Is Struggling