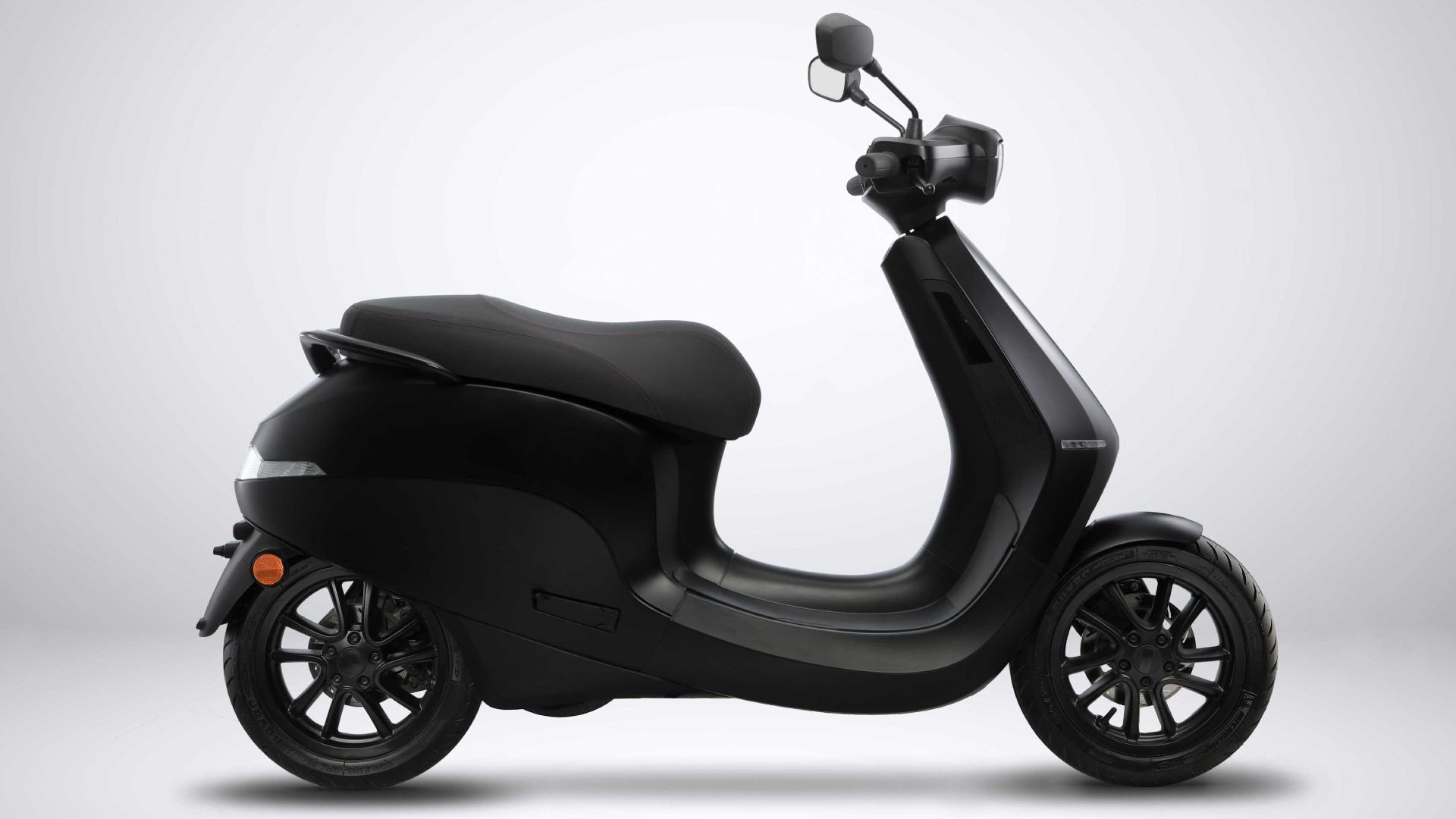 Ola Electric’s announcement about its entry into the electric mobility space was among 2020’s biggest surprises. Last year, Ola Electric – the EV arm of one of the world’s largest ride-hailing companies – confirmed it had acquired Amsterdam-based EV startup Etergo, which makes an electric scooter named ‘AppScooter’. Now, Ola has revealed pictures of its first e-scooter for the Indian market, which is clearly a derivative of the AppScooter.

The Ola electric scooter in the preview images sports a matte-black finish, and runs on 12-inch black alloy wheels. Its design is identical to that of the Etergo AppScooter, and steers clear of dramatic flourishes or complex surfacing; retaining a clean, straightforward appearance. The twin-LED headlight unit appears to be the same (with an identical LED DRL), and the only difference up front is that the apron also incorporates slim turn indicators. Ola’s electric scooter retains the same single-sided telescopic front suspension and horizontally mounted rear shock absorber, as well as the slotted front and rear disc brakes of the Etergo AppScooter. The pillion footpegs fold flush into the scooter’s bodywork, and at the back, the Ola electric scooter gets a chunkier pillion grab handle and a larger, clear-lens tail-light.

While Ola hasn’t shared more details at this point, its electric scooter is likely to retain the AppScooter’s 7.0-inch TFT colour display running an Android operating system and featuring in-built navigation, onboard diagnostics and other infotainment apps. It is also likely to have the same 50-litre underseat storage space as the AppScooter. The Ola electric scooter’s motor is expected to produce over 8 hp and up to 50 Nm of torque. Image: Ola Electric

For now, Ola has refrained from revealing specifications of its electric scooter. For reference, the AppScooter can accommodate up to three banana-shaped modular battery packs. Each pack weighs 8.5 kg (the scooter weighs 74 kg) and provides a range of 80 kilometres, which means with all three packs in place, the AppScooter would have a range of close to 240km. Thanks to their modular construction, these packs can simply be swapped out as and when needed, eliminating long charging times.

The AppScooter’s electric motor can produce up to 8.15 hp and 50 Nm of torque, which lets it accelerate from 0 to 45 kph in 3.9 seconds.
Ola Electric commenced construction of its mega EV manufacturing facility in Tamil Nadu in February. The plant – which is expected to be operational by June this year – is billed the world’s largest two-wheeler production facility, spread out over a total of 500 acres of land. Ola Electric says it will have a total of 3,000 AI-powered robots in the facility, and while it will have an annual production capacity of two million vehicles by June 2021, that number will rise to ten million vehicles by 2022. At that point, Ola Electric estimates it will be producing a new two-wheeler every two seconds from ten production lines. Eventually, Ola Electric aims to produce electric four-wheelers as well.

Given the sheer scale of Ola Electric’s operations, it’s clear the company is aiming to sell truckloads of electric scooters, and will be gunning not just for other electric scooters on sale – such as the Ather 450X, Bajaj Chetak, TVS iQube and rivals from Hero Electric and Okinawa – but even established 110 – 125 cc scooters. However, it’s unclear at this point if Ola will set up its own distribution network to retail the scooter, or if it will tie up with another industry name. More details are expected in the coming months.

Women in Africa more likely to die from pregnancy complications than from COVID-19: WHO study

Tips on keeping your vehicle in top shape while you stay indoors- Technology News, FP