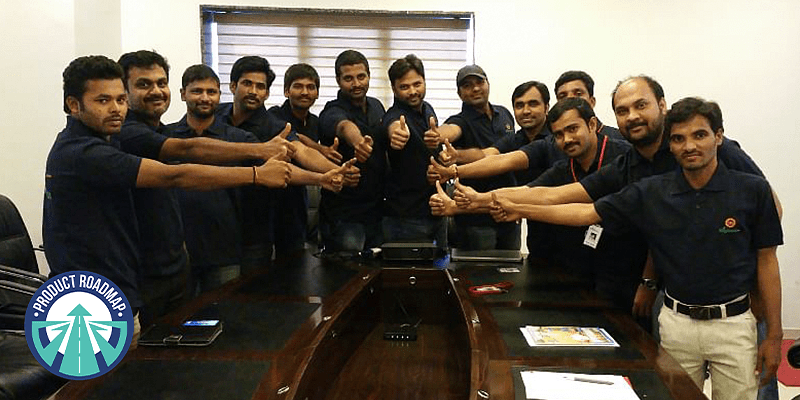 Sateesh Nakula, Sachin Nandwana, and Raj Kancham came from different backgrounds and had decades of experience across startups, corporates, and public sector firms among them.

But, they had one thing in common: a farming background.

The startup leverages science, data, and technology to provide farmers with end-to-end crop advisory and a wide range of quality inputs such as seeds, pesticides, fertilisers, nutrients, and farm implements.

The team claims that four million farmers in India have engaged on the platform since inception, with 80 percent of them acquired digitally.

“When we launched in 2015, we entered the market with a skeletal model of our MVP, a tech-enabled ecommerce platform for agri inputs,” says Sateesh, Co-founder and CEO, BigHaat.

In the initial days, the team built a strong feedback loop and iterated on the product several times to establish a strong market fit. Sateesh says that as they insisted on being digital first, they had to “nuance for farmers according to regions and preferences”.

“We have been growing at a 5x rate in transactions in the last 24 months, with farmers accelerating their adoption of digital platforms. Over four million farmers discovered us by digital means and engaged on the platform for advisory and inputs. Now with the addition of a robust engagement model and other value-added services, we aim to grow at a rate of 5x YoY from here and further bolster our offering for farmers,” Sateesh says.

From the basic MVP of agri inputs, BigHaat went on to provide three additional offerings.

Realising that advisory was critical for pre-harvest management, the team conducted pilots. They figured out how to monetise and launched a crop advisory service that gives personalised end-to-end crop advisory and agronomy insights for disease and pests control at every stage of the crop.

“We have facilitated a crop doctor for real-time advice based on images that farmers send in,” Sateesh says.

The third service is a built-in social media community platform where farmers can post, share, respond, and learn from a carefully curated team of agri experts.

“In addition, we are in talks with various partners to provide credit, insurance, and market linkages services to farmers and be a holistic one-stop platform partner for the farmer for life,” Sateesh says.

Within the first year, the team realised the need for greater technology. But, they wanted to get the MVP right.

Sateesh explains that they focused on the core functionality – to enable farmers across India to order agri inputs online. This led to the prioritisation of certain aspects such as regional language translation, seamless payment, and building of a robust architecture.

“As an example of next-stage development of the product, we wanted to launch crop advisory but did not want to charge small individual farmers, who form a chunk of our customer base. We had a different angle – acquire a massive farmer base and get manufacturers to foot the bill. We have accomplished this recently.”

“There are several examples for the many offerings we have rolled out. We are in the process of continuously enhancing these offerings to provide a best-in-class experience to farmers. For this, every stage of the user feedback loop is worked on by an army of engineers and data scientists, and actioned on to bring a holistic offering to the farmer. Every pain point, every suggestion is worked on.”

What does the farmer need?

The team continued to work this way for three years. The first product was convenient for users, and the team plugged in through an assisted model with a backend farmer advisory team and experienced field agents, where needed.

Being a high-touch segment, the focus was on a strong A/B testing mechanism with constant touch points.

“We encouraged farmers to go digital and educated them on its value-adds. As a result, more than 80 percent of our transactions are digital today. User feedback has been very positive, and we have had strong repeat strong metrics. Farmers find it highly convenient to have crop advisory and inputs at their fingertips,” Sateesh says.

The team’s ground knowledge and field agents helped get the feedback on products that needed to be distributed. “We then leverage that knowledge and share with manufacturers to, in turn, furnish them with a great feedback loop too,” Sateesh says.

The space and the future

In August 2020, BigHaat raised over $2 million in a pre-Series A funding round. The company is going to be hiring across various departments in its business, and aims to engage over 10 million farmers across India over the next 24 months.

Today, the platform provides farmers with omnichannel access to advisory and products. It achieves this through digital touchpoints (mobile app/web), a missed call for non-internet users, and feet-on-street presence. It also offers vernacular advisory for rural users in multiple regional languages.

The last couple of years have seen a spurt in the growth of agritech startups. The players include DeHaat, which recently raised funding, Unnati (founded by Paytm Mall’s Amit Sinha), AgroStar, Gramophone, Kisan Point, Agribazaar, and several others.

Tech-led agriculture is only getting started in India, with the market poised to be worth $24 billion by 2025, according to EY.

“With the huge amount of data analytics that we sit on, we are looking at intelligent market linkages, credit and insurance products, and one inspired by a recent Eureka moment – plot-level advisory powered by satellite imaging, big data, heat maps, and AI. Making agri-input manufacturers more intelligent. We also aim to offer data driven insights with our agrilytics data platform in development,” says Sateesh.