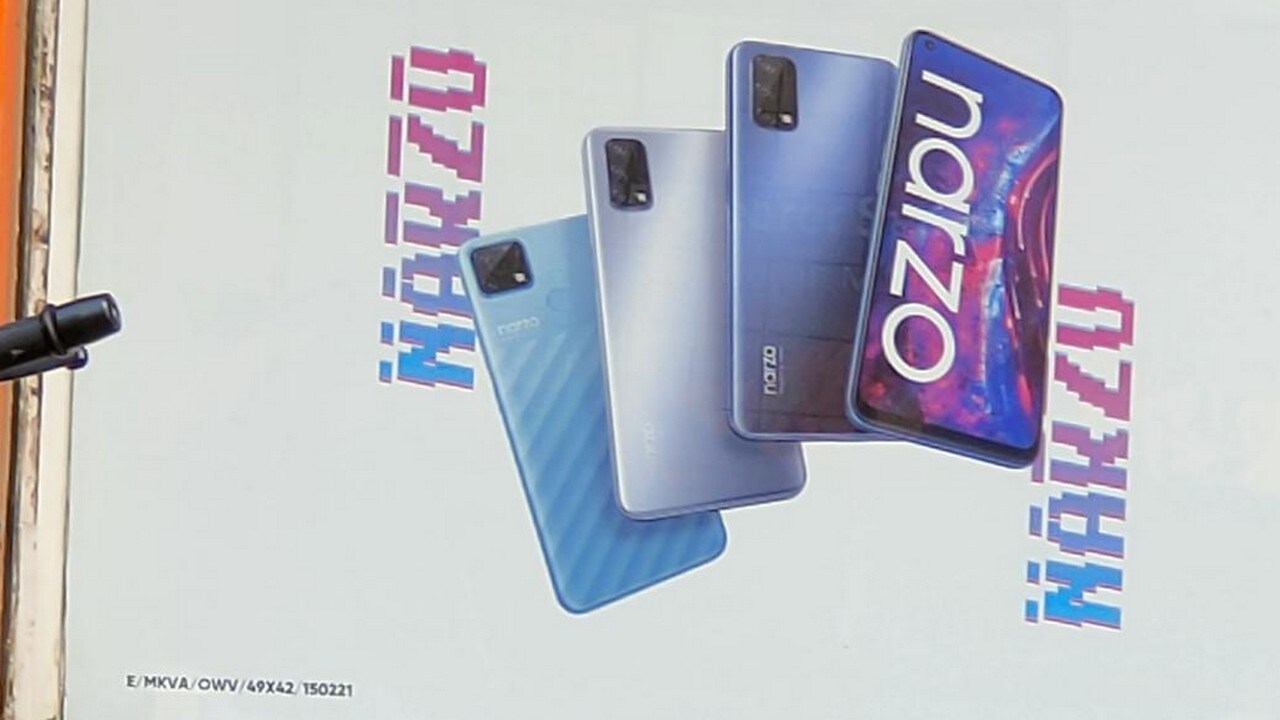 Realme is expected to launch the new phones under the Narzo series this month. A report suggests that the company would be launching the Realme Narzo 30 series by the end of February. According to a leaked poster teased by a user on Twitter, the new Narzo series will feature Narzo 30 Pro 5G and Narzo 30A. The image shows some specifications of the Realme Narzo 30 Pro 5G which includes a MediaTek Dimensity 800U 5G processor and 120Hz refresh rate display. The phone can be seen with a punch-hole display, but it’s unclear whether the screen is an LCD or AMOLED panel. The Pro model can be seen housing a rectangular camera module at the back with the quad-camera setup and led flash, along with the Narzo badging at the bottom left of the phone. It is not clear if there would be a side-mounted fingerprint sensor or an in-display fingerprint sensor. Realme Narzo 30A, on the other hand, can be seen with a rear fingerprint sensor and cameras stacked in a square-shaped module, along with the Narzo badging just under the camera setup. The Narzo 30A can be seen with a textured rear panel which is blue in color, while the Narzo 30 Pro 5G is seen in silver and blue colors option. Another tweet by tipster Ishan Agarwal suggests that the company might also launch gaming accessories alongside the Narzo 30 series in India. The accessories could include a mouse pad and a gaming mouse, amongst others.

Exclusive: realme will also be launching gaming accessories along with narzo 30 series. These look cool… The gaming mouse and the pad also indicates at an imminent launch of a gaming laptop? #realme is yet to announce the launch dates of the narzo 30 series. What do you think? pic.twitter.com/0XBQpITfq2 — Ishan Agarwal (@ishanagarwal24) February 12, 2021

Realme had introduced the Narzo series in May last year where it launched the Narzo 10 and Narzo 10A phones, followed by Narzo 20 series that was launched in September, last year.

3 Million+ Young Players on board!#Narzobyrealme is designed to cater the powerful smartphone needs of Gaming Enthusiasts. This community of users is now as strong and powerful as the smartphones Narzo by realme offers. pic.twitter.com/uLOVdHuzJw — realme (@realmemobiles) February 15, 2021

On Monday, the company had tweeted that it had sold over three million Realme Narzo series handsets since the launch.