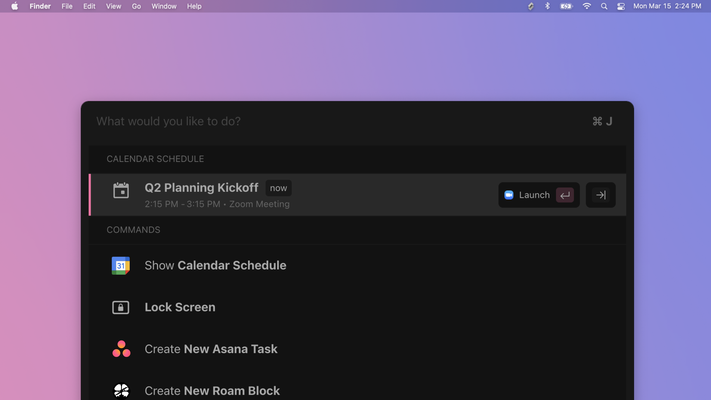 The explosion in productivity software amid a broader remote work boom has been one of the pandemic’s clearest tech impacts. But learning to use a dozen new programs while having to decipher which data is hosted where can sometimes seem to have an adverse effect on worker productivity. It’s all time that users can take for granted, even when carrying out common tasks like navigating to the calendar to view more info to click a link to open the browser to redirect to the native app to open a Zoom call.

Slapdash is aiming to carve a new niche out for itself among workplace software tools, pushing a desire for peak performance to the forefront with a product that shaves seconds off each instance where a user needs to find data hosted in a cloud app or carry out an action. While most of the integration-heavy software suites to emerge during the remote work boom have focused on promoting visibility or re-skinning workflows across the tangled weave of SaaS apps, Slapdash founder Ivan Kanevski hopes that the company’s efforts to engineer a quicker path to information will push tech workers to integrate another tool into their workflow.

The team tells TC that they’ve has raised $3.7 million in seed funding from investors that include S28 Capital, Quiet Capital. Quarry Ventures and Twenty Two Ventures. Angels participating in the round include co-founders at companies like Patreon, Docker and Zynga. 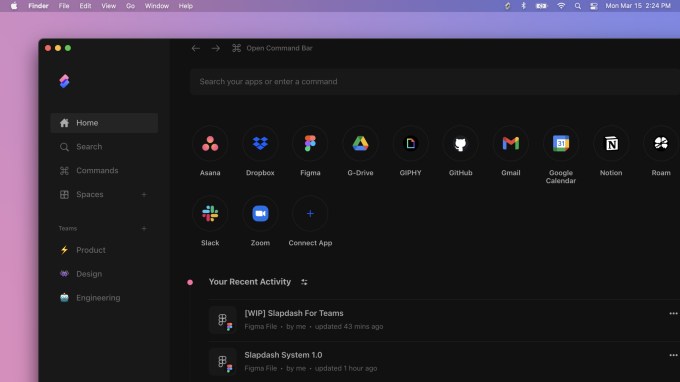 Kanevski says the team sought to emulate the success of popular apps like Superhuman which have pushed low-latency command line interface navigation while emulating some of the sleek internal tools used at companies like Facebook where he spent nearly six years as a software engineer.

Slapdash’s command line widget can be pulled up anywhere, once installed, with a quick keyboard shortcut. From there, users can search through a laundry list of indexable apps including Slack, Zoom, Jira and about twenty others. Beyond command line access, users can create folders of files and actions inside the full desktop app or create their own keyboard shortcuts to quickly hammer out a task. The app is available on Mac, Windows, Linux and the web.

“We’re not trying to displace the applications that you connect to Slapdash,” he says. “You won’t see us, for example, building document editing, you won’t see us building project management, just because our sort of philosophy is that we’re a neutral platform.”

The company offers a free tier for users indexing up to five apps and creating ten commands and spaces, any more than that and you level up into a $12 per month paid plan. Things look more customized for enterprise-wide pricing. As the team hopes to make the tool essential to startups, Kanevski see the app’s hefty utility for individual users as a clear asset in scaling up.

“If you anticipate rolling this out to larger organizations, you would want the people that are using the software to have a blast with it,” he says. “We have quite a lot of confidence that even at this sort of individual atomic level, we built something pretty joyful and helpful.”

7 Crucial Threats That Could Ruin Your Business Reputation

Opaper takes the friction out of social commerce – TechCrunch