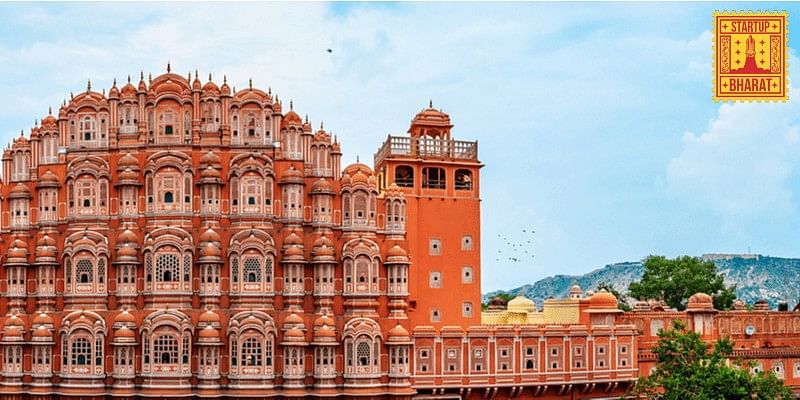 When talking of an ideal entrepreneurial ecosystem, one imagines startups in various stages successfully blooming with the backing and support of investors, the government and also the local community. One such emerging startup and tech hub is Jaipur, the capital of Rajasthan, a state known to have finance in its DNA.

In the state budget rollout last week, Chief Minister Ashok Gehlot announced plans to set up a FinTech City in Jaipur. In his speech, the CM said Rajasthan has always contributed the highest number of Chartered Accountants (CAs) to the nation, and is a service delivery hub for multinational IT companies.

With the state having its own fintech hub, many CAs and IT professionals from Rajasthan who work in other parts of the country will now have a base in their home state, said the CM. The project cost of the FinTech City proposed by RIICO (Rajasthan State Industrial Development and Investment Corporation) is Rs 106 crore, and it includes developing basic infrastructure like roads and parking, streetlights, water, electricity, parks, community facilities, public utility areas, and more. The FinTech City will be an integrated development of IT & Finance that will offer large workspaces for companies from both sectors. A land area of 4,08,590.85 sqm near the Dravyavati River has been allocated for the project, and it is also close to the International Airport in the city.

In the budget rollout,  the government had also announced seed money up to Rs 25 lakh, in addition to the Rajasthan Startup Policy 2015. According to the CM, the state’s i-Start programme will continue giving all the benefits mentioned in the State Startup Policy.

YourStory spoke to startups and investors from the state to know how these new announcements impact them:

With finance in the DNA; early help is a boost

Tikam Chand Jain, Founder and CEO of Fleeca India, a Jaipur-based tyre and fleet care startup, says these new measures can attract a lot of startups to Jaipur, as they are now assured of help and support in the initial years. Having fixed expenses for office space rental and infrastructure can be a huge burden in the initial years, but with government help, these need not be so burdensome anymore, he opines.

Adding to the sentiment, Sanjay Meena, an independent financial consultant for tech startups in Gurugram agrees that the idea of returning to his home state with the added promise of new opportunities is indeed fascinating. “Given the right support, I will be happy to move back to my home state, and start my business in Jaipur,” says Sanjay, an aspiring entrepreneur.

Anup Kumar, CEO and Founder, Kirana King, says that this new announcement could showcase Jaipur as a tech hub, on par with Bengaluru, Hyderabad, Delhi NCR and other metros. Rajasthan has tremendous potential with regards to entrepreneurship, and channelling younger entrepreneurs towards building a broad and robust base for the MSME sector. “We believe that this step towards empowering the native working professionals will reap benefits beyond the industry level. Its effect will be seen at the grassroot level too, such as the technological advancement of all entrepreneurial ventures who are in need of finance-related IT solutions,” says Anup.

Jaipur-based Kirana King provides a gamut of services to conventional kirana stores through its dynamo of RaaS (Retail as a Service), which is a combination of store transformations, enhanced and convenient store layouts, supply chain and marketing to drive more footfalls, digital solutions, ecommerce stack, and training and development of the kirana ecosystem. The company claims to have enabled more than 300 small retail stores since its inception in 2017.

Anup added these latest measures will also open new doors of employment for the locals, and give existing businesses a new vision and opportunities to expand their consumer service metrics with fintech as one of the key functions.

An investor who has funded various startups including some based in Rajasthan says, on the condition of anonymity, that government initiatives have always been big on paper, but have been disasters on the ground. He adds that many of his investee companies did not receive the promised amount from the government in 2016/2017, and invariably had to be shut down. He is quick to add that Rajasthan is home to a lot of talented youth, especially in the finance sector, and if the government does provide what it promises, then it would be a game changer for the startup community, and Jaipur can be seen to be on par with Delhi NCR, Bengaluru, and Mumbai.

In contrast, Shreyans Mehta, Co-founder and CEO of Kota-based MedCords, says that while the government has been supportive of startups, and despite Rajasthan being a hub of talent in the financial space, the real challenge is in recruiting good talent as people still hesitate to move away from metros.

Situated in Mahindra SEZ Jaipur, consulting firm Advanced Technology Consulting Service (ATCS) provides IT consulting services to Fortune 500 companies across the world. Its Managing Director, Sanjul Vaish, says that such a development can be a proven milestone for people who are living in other cities for better opportunities, and would bring a lot of investment and talent back to the state.

Sourjyendu Medda, co-founder of Jaipur-based DealShare says that the setting up of FinTech City is the need of the hour, especially after the pandemic, as it can effectively address one of the biggest pain points of the industry – infrastructure. “The move will not only encourage more players to look at Rajasthan as a destination but also boost the existing startup and technology ecosystem. This will give the startups easier access to better infrastructure facilities at costs that are affordable to them. Further, a dedicated infrastructure support system will have a ripple effect as it will aid the growth of allied industries like ecommerce, edtech, re-commerce, media etc.,” says Sourjyendu.

Pravin Sharma, founder of Jaipur-based fintech company GetePay, says that the city has huge potential for fintech and other startups because of its talent pool and proximity to other key cities. “Jaipur is also a very cost-effective option unlike other financial hubs like Mumbai,” he says.

GetePay is a SaaS solutions company for ecommerce players and other businesses. According to Pravin, the fintech space has seen tremendous growth in the last few years, especially during the pandemic, as more people started to use digital platforms, and digital payments became the preferred mode of payment during the crisis.

“With the government providing infrastructure with the FinTech City, it will attract more startups and business houses to come and setup their ventures here. This will also help homegrown startups like us,” he concludes.

Founded amid the pandemic, this edtech startup enables kids to develop life skills

Future of angel investments in India

How to successfully spot and harness fundamental business shifts

How to Succeed in Google Ads Without Modified Broad Match –