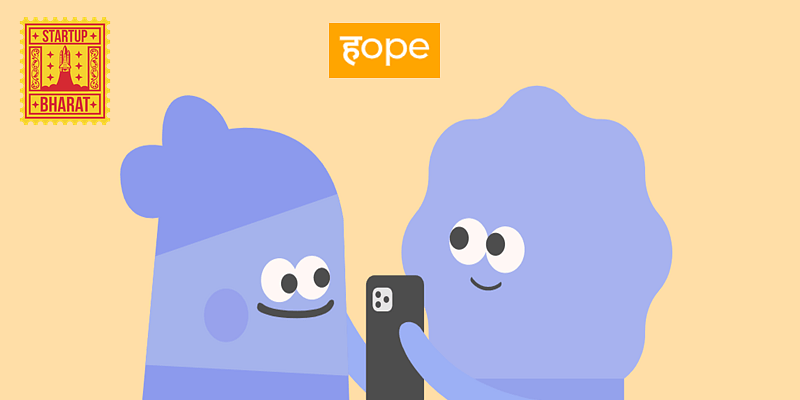 Aspiring engineer Tharun Sai E dreamt of the same thing others in his boat often dream of — cracking the IIT-JEE examination and getting into a good IIT school.

Like thousands of others like him, Tharun put in over 10 hours a day studying. He joined a coaching class when he was in the ninth grade, signing away his life for the next four years to endless assignments, hours-long study sessions, and recurring mock tests.

However, the universe had other plans for him. He did not clear his IIT-JEE examination — his only dream — which left him shattered. Around the same time, he met with an accident that left him bedridden, just as he was getting out of a relationship with his partner — the straw that finally broke the camel’s back.

“All these life events led me to depression. The worst part was I never accepted that I was dealing with depression because of the stigma attached to it. I couldn’t share my feelings with anyone because I didn’t want to trouble my parents and was afraid of being judged in front of friends,” Tharun tells YourStory.

Eventually, those feelings led him to decide to take his own life, and he decided to jump off a building. But just as he was about to, he saw someone else jump off it, right in front of his eyes.

When shock and bewilderment abated, Tharun realised something that not only saved him but also gave his life a renewed sense of purpose — he was not alone in feeling the way he was, and that others around him were suffering in silence too.

“All that inner turmoil turned into the desire to build a solution for all who are suffering alone,” Tharun says. Six months later, after putting in heaps of research and talking to professionals, psychology students, and suicide survivors, the now 20-year old founded FindHope — a Hyderabad-based mental health startup.

A win-win situation for all

Having personally dealt with depression, and hence understanding what it entails, Tharun decided that FindHope’s biggest value proposition would be “free and continuous support for weeks or months.”

Any professional support, talk-based therapy, and mental exercises need to be consistent to be able to ameliorate any psychological struggles.

However, he realised that quality was another issue in India, where mental health, still in its nascent stage, is often viewed through a negative lens, especially in lower-tier towns.

In India, having depression, panic attacks, anxiety, and other mental illnesses, such as bipolar personality disorder, are often tied to the religious sphere.

Pseudo-sciences play a big and harmful role in treating such ailments, and people with zero qualifications in human psychology often masquerade as qualified professionals to remedy such problems, including homosexuality, with ritualistic practices.

Having quality therapists and professionals to serve young adults was extremely important. To enable that, Tharun came up with the concept of peer support, where final year psychology students, in conjunction with professionals, would provide support to young people dealing with mild to moderate levels of mental health struggles.

“This was a win-win situation because psychology students get the experience and mentorship, while the youth gets quality free support,” he says.

Besides offering therapy as part of its peer support service, the Hyderabad-based startup also offers an “emotional fitness gym” — a smartphone-enabled game people can use to build their mental resilience and learn various skills for dealing with real-life challenges.

Since its launch in May 2020, FindHope has provided support to over 3,000 young adults, with an average of four hours, across three weeks, spent on a user. It counts over 50 peer counsellors as part of its team.

“Our mission is to leverage technology to make mental health services accessible to youth, thereby reducing the treatment gap from 83 percent to 50 percent. We envision an India, free of mental health struggles, as people are equipped with technology to get the right support,” Tharun says.

In a bid to make mental health tools and resources more accessible to people, FindHope uses a freemium model to operate, where one-on-one counsellor-services are offered for free.

Psychology majors who wish to offer services on the platform, and accrue on-field experience, pay a small fee to the startup to enlist. Tharun says his startup has managed to convert about 10 percent of its users into paying customers.

The “emotional fitness gym” game — still in the works — offers a free trial for 21 days, post which it charges a nominal fee of Rs 99 per month. The game helps users connect with psychologists, and FindHope gets a cut of the fee paid to the therapist.

To date, the bootstrapped startup has made Rs 2 lakh in revenue and claims positive unit economics. The single-founder venture — which is growing 1.5X month on month — is actively looking for seed funds to scale.

Users can sign up for the startup’s services by just filling out a form containing details such as name and phone number. Post that, FindHope’s team reaches out to the user and asks them to take a few self-assessment tests. Based on the results, the team either connects the user to a peer counsellor or recommends a professional therapist in case of severe issues.

“We want to make our platform a place to find hope when things fall apart, and we do that with technology that mixes engaging games with peer support,” Tharun says.

FindHope’s competitors include a host of mental health platforms, including Wysa, 7 Cups, MindPeers, etc. — also based on a freemium model.

As per an ASSOCHAM report, India has the highest rate of suicides in the 15-29 age category, with at least 42.5 percent of people working in the private sector battling depression or anxiety. About 60 percent of Indians facing mental health issues don’t seek help because of the stigma associated with mental illnesses.

At present, there are merely three psychiatrists per 10 lakh Indians, making it one of the most underserved healthcare verticals in the world.

The Insurance Regulatory and Development Authority (IRDAI) only recently made it mandatory for health insurance companies to add mental illnesses as part of their coverage, the way they do for physical illness treatments.

Be a co-founder of social change with ACT

how the startup ecosystem in Kigali offers new opportunity

How used car platform Spinny plans to expand to 20 cities, grow 4x by end of the year

How startup incubators can become the launchpads for a modern economy