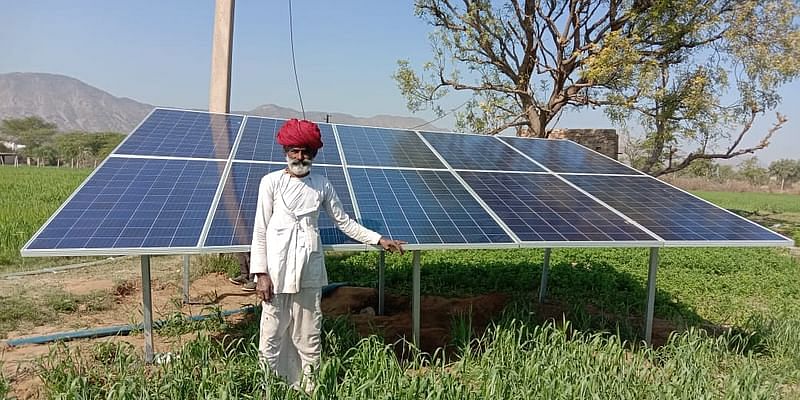 An attempt to cut farmers’ dependence on fossil fuels led a biogas executive to start an aggregator that offers a slew of renewable energy options, along with personalised guidance and maintenance services.

Vimal Panjwani founded AgriVijay in 2020 with his mother and retired government officer Shobha Chanchlani to provide farmers a wide range of green energy equipment tailored to their needs and infrastructure set-up.

“After spending eight years working with farmers, women, and families in rural areas, I realised they are largely dependent on fossil fuels such as diesel and firewood for cooking, running electric water pumps, and milking machines, among other activities,” says Vimal, a native of a small town in Ajmer.

But costly fossil fuels, he says, were not only eating into farmers’ monthly incomes, but were also causing pollution and respiratory illnesses. Waste disposal was also a problem in villages due to poor civic services. However, options such as biogas could help eliminate waste and generate usable electricity, while being cheaper and environment-friendly.

“With those factors in mind, I decided to club renewable energy with agriculture,” Vimal says of his Pune-based startup.

Vimal reasons that in an agrarian economy like India, if all farmers become renewable energy producers and consumers at the same time, they will increase their savings, become energy-independent, and also help fight climate change.

“Our vision is to empower the farmers of tomorrow.”

With AgriVijay, Vimal is seeking to democratise access to green energy in rural areas.

While working in the biogas sector, he had found that few renewable energy options were available and they could be installed only by those who could afford them and already had the infrastructure in place.

Prices range from Rs 9,000 to Rs 35,000 for solar and biogas energy equipment. The startup sells mainly through its website, call centre, and social media channels. Farmers can also buy the products from the startup’s offline stores in villages.

Once prospective customers express interest in AgriVijay’s products, the startup’s call centre or field sales team either calls them up or arranges personal meetings to understand their energy needs. Agents then survey the space and current set-up and offer recommendations.

The products gets delivered to the customers’ doorstep in around 10 days, with installation taken care of by the startup’s tech team.

In the six months since its inception, AgriVijay has got 11 brands and partners on board that supply parts for the power set-up. It has opened two branch offices, one in Maharashtra, the other in Rajasthan — the two states where it operates at present.

The startup prefers to employ locals with some experience in the agriculture set-up. Its tech team comprises people who lost their jobs during the COVID-19 pandemic.

All parts and equipment for the renewable energy set-up are provided to AgriVijay by small startups and companies in the space — a win-win for the ecosystem.

AgriVijay is bootstrapped, with some seed money coming from Vimal’s mother. He says the startup is in talks with investors and venture capitalists to raise its first round of funding.

The startup has so far generated Rs 22.30 lakh in revenue.

The startup aggregator plans to set up shop in Gujarat and Karnataka after raising a round of funding. Vimal also aims to expand to other Asian countries soon, and add wind energy to AgriVijay’s product portfolio.

AgriVijay has launched in a sector that has quite a few tailwinds in India.

Power generation from renewable energy sources reached 127.01 billion units in FY20, according to a January 2021 report by the India Brand Equity Foundation (IBEF).

The total installed renewable energy (solar, wind, biomass, and small hydropower) capacity was 89.63 gigawatts (GW) till October 2020, according to the Ministry of New and Renewable Energy. The ministry plans to ramp the capacity up to 227 GW (excluding hydropower) by 2022, says the IBEF report.

The renewable energy space has also attracted investor interest, with foreign direct investments (FDI) reaching $9.68 billion between April 2000 and September 2020, says the IBEF report. By 2028, FDI flows into the sector are expected to reach $500 billion.

Marketing and branding in the new digital world