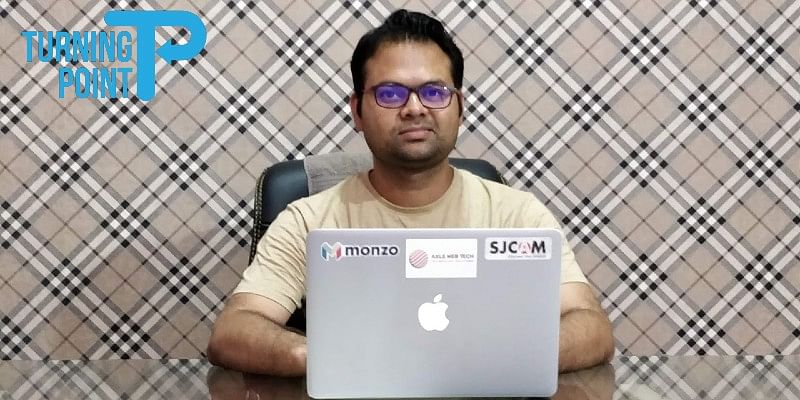 When an engineer got an offer from a Rewa-based company, he thought it was a fake firm. But it wasn’t. It was a web development startup launched by Anshul Shrivastava to change “how small towns are perceived when it comes to work opportunities”.

Started in June 2019, AxleWeb Technologies, which is based in Rewa, a small town in Madhya Pradesh, helps companies like Slack, WhatsApp, Facebook, Amazon’s Alexa Skills, Google Home Actions, and more with chatbots.

“I chose Rewa because it is my hometown. I wanted to provide employment opportunities to our youth, who would have otherwise had to migrate to bigger cities in search of a job,” says Anshul, 33, the Founder and CEO of AxleWeb.

It was in 2013, three years into his stint at Mindtree in Pune, that Anshul began contemplating starting something of his own. He knew his strengths lay in technology, and building products and solutions. On the back of this interest, he started taking up freelance projects and built websites for small businesses.

A year later, the work grew so much that he had to rope in more freelancers to meet project deadlines.

The turning point for Anshul though was when a four-year project opportunity in London opened. This is when he learnt about advanced website development, mobile app development, AR, and VR, chatbots, Alexa and more. Being entrepreneurial in nature, Anshul started working as a freelancer and began creating chatbots for small businesses in London as well.

“The idea took off and more people started contacting me for chatbots and Alexa skill development. This led me to resign from my job after nine years and start a development company. In June 2019, I started AxleWeb Technologies, focusing specifically on chatbots, Alexa skills, and AI-powered digital assistants,” Anshul says. He adds that he invested about Rs 2 lakh as seed capital from his savings to start the company.

So far, Anshul claims to have spent over Rs 30 lakh on hiring, technology, and product development since 2019. AxleWeb has also been recognised by the government’s Startup India initiative.

Anshul says the company has more than 150 clients across the world. Most are from outside of India because AxleWeb builds everything in-house from scratch and can offer solutions at a lower cost than other players in the market.

“We build custom chatbots, tailor-made for client requirements. We do not use any template or any bot builder like ManyChat or Chatfuel. Our chatbots are highly customisable and our costs are a fraction of what our competitors charge,” Anshul says.

Ansul maintains that the company is growing fast and is seeing a rise of 50 percent in its revenue quarter on quarter. “We registered a turnover of Rs 28 lakh in FY20,” he says. “The target is to cross Rs 1 crore revenue mark as early as possible.”

Startups need to solve the AI puzzle to grow sustainably

Sun Mobility’s losses widen in FY22; revenue up by 55%

Upskilling, learning, and creating a strong peer network are key to a successful career: Asha Kurup of Infosys

How India’s biggest logistics partners are leveraging technology to thrive

How Indian startups are scaling up to next level of growth