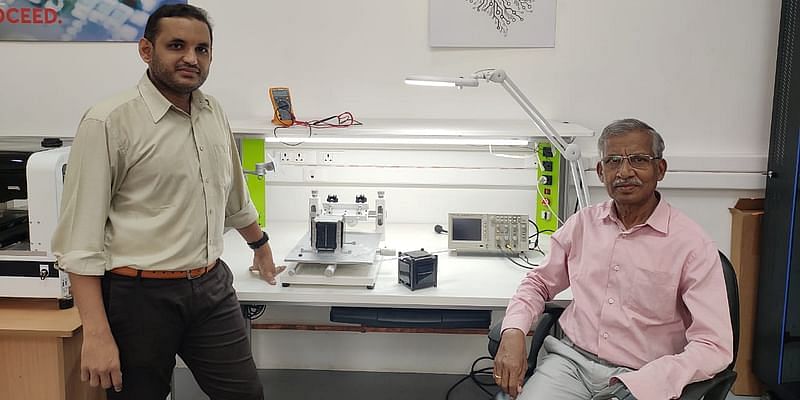 Satellite images of our planet, space, moon, and orbits are always mesmerising to look at. But what if one could stream real-time high-resolution videos from space?

Entrepreneur Ramesh Kumar V, who has always been excited about the space sector, realised that while several private players were focusing on building satellites to capture high-resolution images, very few were working on capturing real-time videos.

This realisation led him to launch Bengaluru-based Grahaa Space along with M Loganathan in 2018. The PSG STEP, Coimbatore-incubated spacetech startup is involved in designing and developing a cluster of earth-observation nanosatellites, which will be programmed to stream near real-time, high-resolution videos of client-defined areas of interest.

“During my tenure at IBM as a Senior Executive Producer for Live Streaming technical content, I had access to UStream, which had the official NASA channel that streamed the live video feed from its HDEV experimentation. At that time, I was also exploring earth observation as a business opportunity. Many private companies and academic institutes were actively sending earth observation satellites to capture high-resolution images at varying frequencies, but very few startups were researching in the video streaming area. That was my eureka moment,” Ramesh tells YourStory.

Ramesh reveals that he met M Loganathan during a UN workshop hosted by ISRO and IIRS. They discussed opportunities for streaming high-resolution videos from low earth orbit using nanosatellites and their potential applications.

And, Grahaa Space was born.

Ramesh explained that Grahaa Space got its name from the Sanskrit word “Graha”, which means both “receiving” and “planet”. Grahaa Space has been named to represent “receiving live data about our planet”.

The DPIIT-recognised spacetech startup’s patent-pending technology aims to enable streaming live videos from low earth orbit. The co-founder explains that the videos will be processed real-time and the feed will be available commercially to concerned businesses through an AI-powered interactive web platform.

Ramesh says the startup is currently building nanosatellites and planning to launch its demonstration mission by January 2022. Once the satellites are inserted into the low earth orbit (LEO), it will share real-time videos that can be commercially accessed by businesses.

“At present, we are working on simulations for a variety of our mission requirements. We are also testing our communications modules as we will be dealing with large amounts of data. We have also been prototyping and testing some of the structural components so far,” he says.

Ramesh reveals that the founders have invested around Rs 16 lakh in the bootstrapped startup to date.

Speaking about future plans, he says they are now looking to raise their first round of funding. The startup is also planning to sign MoUs with partners and vendors in the coming months and is also in talks with a few potential customers.

According to a report by MarketsandMarkets Research, the global nanosatellite and microsatellite market size is expected to reach $4.8 billion by 2025 from $1.8 billion in 2020 at a CAGR of 21.3 percent.

The co-founder says that Grahaa is operating in a similar field as spacetech startup Pixxel, which is building a constellation of small earth imaging satellites for observing the planet. However, Grahaa’s USP lies in its real-time video streaming technology.

According to a report by PwC, the Indian space economy is valued at $7 billion, and forms two percent of the global space economy. The sector needs to grow at an approximate rate of 48 percent CAGR over the next five years to reach its target of $50 billion.

With the opening up of the space sector to include private players, the goal might not be too far away.

How Maadhyam is leveraging AWS to replace the middleman with middleware

Credit card-UPI linking: Is it a good move?