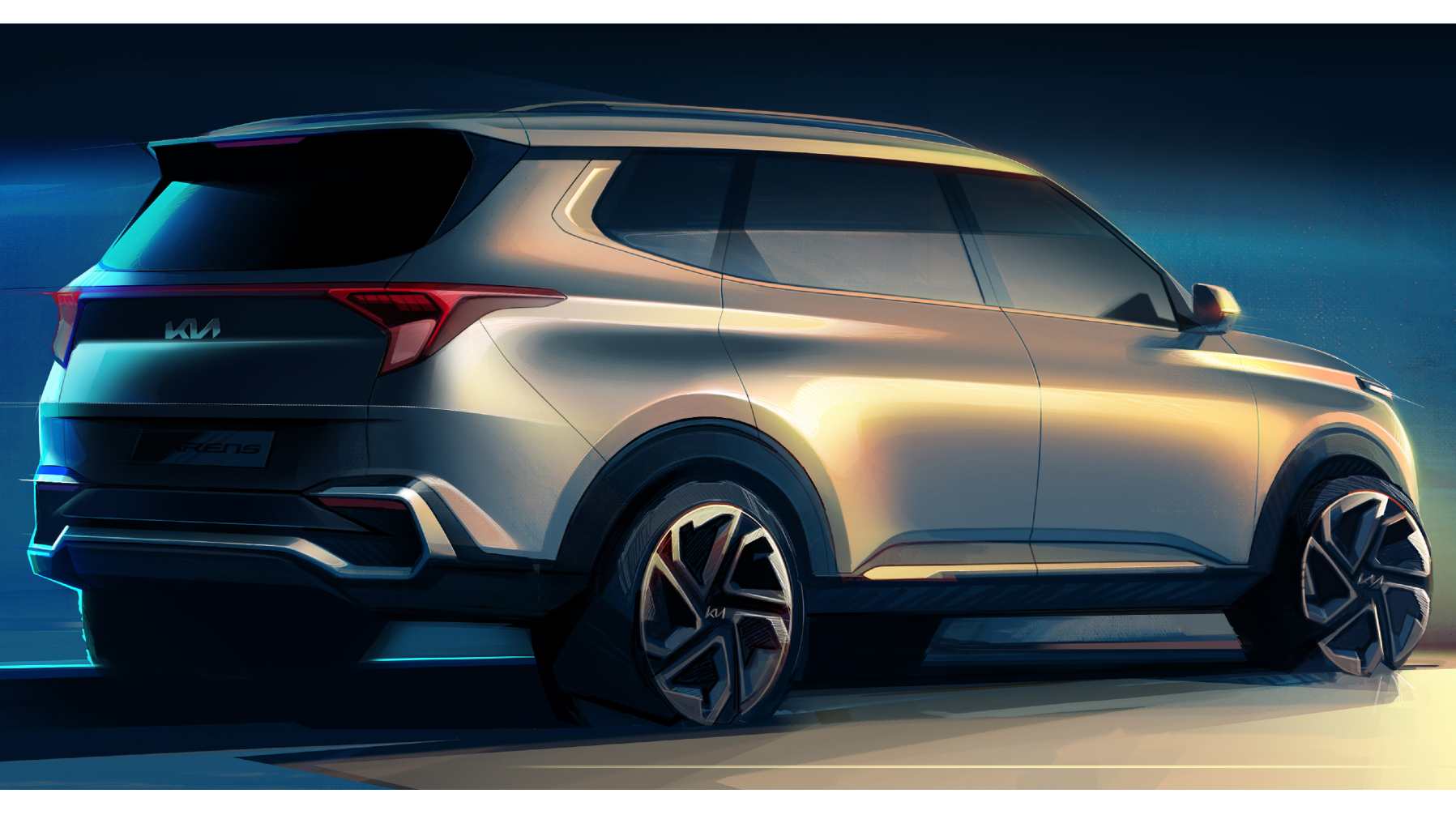 Today is the day! Kia India will soon pull the wraps off of an all-new model from the brand – the Kia Carens, which is making its world premiere today, in New Delhi. Following the Seltos, Carnival and Sonet, the Kia Carens – which will be a new family-oriented model – is set to plug the vast gap that exists in India’s domestic MPV market at present, but with the design sketches, Kia is keen to show the Carens will be more than just another multi-purpose vehicle.

In the build-up to the debut of the Carens, Kia has been saying its newest offering – which the company loosely terms a ‘recreational vehicle’ – will combine the attributes of ‘a large family vehicle with the boldness of an SUV’. This is clear from the design sketches, which reveal an MPV that appears to be slightly larger than the Seltos, but also incorporates enough SUV bits into its design to avoid looking like a traditional people-carrier.

Sporting a new take on Kia’s signature ‘Tiger Nose’ face, the Carens features a distinctive light signature created by the kinked LED DRLs up front, which sit above the main LED headlight clusters. The large air intake has a brushed aluminium surround, there’s heavy plastic cladding around the sides of the Carens, and the subtly-incorporated roof rails all add to its tougher-than-an-MPV look. The LED tail-lights appear to be linked by a light bar in a bid to accentuate the MPV’s width, and there’s a brushed aluminium element integrated into the rear bumper as well, so when viewed from the side or rear-three-quarter angles, the Carens – at least in the sketches – appears more SUV-like.

On the inside, the Kia Carens will have the same 10.25-inch touchscreen infotainment system as the Seltos, along with a digital instruments display, powered sunroof, ventilated front seats, wireless smartphone charging, an air purifier and more. While we do know it will be a three-row vehicle, it remains to be seen if Kia chooses to offer it in both six- and seven-seat forms, with the former being equipped with captain chairs for the second-row passengers.

The Carens name – which was rumoured to be the name chosen for a long time – will be familiar to audiences overseas, as Kia has sold three generations of the Carens MPV abroad over the last two decades, and the model set to be introduced in India will be the fourth-generation Kia Carens. According to Kia, the Carens name is “based on the concept of ’Car + Renaissance’, which signifies the beginning of a new era of cars.” Aimed at ‘modern Indian families’, Kia says the Carens will create a segment of its own.

That may not strictly be true, as the Mahindra Marazzo is still very much around but hardly finds any takers, and there does exist a chasm between India’s highest-selling MPVs – the Maruti Suzuki Ertiga at the budget end, and the Toyota Innova at the premium end. Kia’s only MPV on sale in India, the Carnival, is also positioned as a super-premium offering, and the Carens – which is expected to be slightly larger than the Kia Seltos SUV, but smaller than the Carnival – will be a more affordable and more accessible family vehicle.

The Kia Carens is set to carry over the Seltos’ 115 hp, 1.5-litre diesel engine, and could be available with a 169 hp, 2.0-litre, four-cylinder petrol engine – as seen on the Hyundai Alcazar – as well. Expect to see both engines offered with a six-speed manual as well as a six-speed automatic gearbox.

Barring the Marazzo, the Kia Carens will have no direct rivals at launch, but it will have to contend with three-row SUVs operating in the same price segment, including the Alcazar, MG Hector Plus and Tata Safari. Expect prices for the Kia Carens to range from Rs 13-19 lakh (ex-showroom) when it’s launched in the first quarter of 2022.

How Elon Musk’s Twitter bid may have been a smokescreen to liquidate Tesla stocks- Technology News, FP

New York becomes the first US state to pass a ‘Right-to-Repair’ legislation, but in a very watered down manner- Technology News, FP

Watch the video to know how it works- Technology News, FP

A mid-range smartphone that defines elegance in its segment- Technology News, FP

Humans will be living & working on the Moon by the end of this decade thanks to Artemis 1, says NASA- Technology News, FP