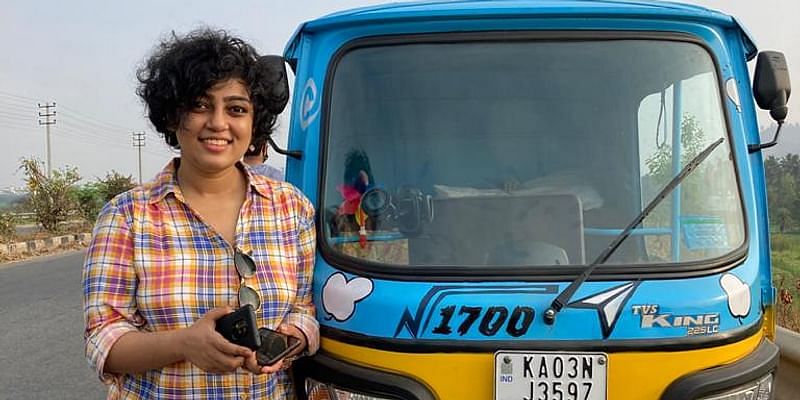 While five friends going on a 1,700 km autorickshaw ride from Bengaluru to Mumbai may sound just fun at once, there was a purpose to the mission. The agenda was to help get more girl children to get the education they deserve.

It is what got Preetha Datta, Anshul Rai Sharma, Paul Kurian, Venkatesh Thapan, and Vidur Singh to come up with the idea of ‘Auto for Impact’. The friends collaborated with Project Nanhi Kali and took on a 1,700 km long autorickshaw expedition from Bengaluru to Mumbai to raise awareness, and educate young girls.

“The motherly affection with which an unknown woman made us poori bhaji for breakfast when she saw five famished kids arrive at her stall in the middle of nowhere. The innocence of the 13-year-old girl handling her parents’ coconut stall while finishing her homework touched us. When we think about our journey on the road, we remember the generosity with which we were welcomed everywhere we went.”

The founders say the idea of Auto for Impact because they saw the stark contrast between segments and sectors the pandemic impacted. The computer science graduates from Ashoka University had realised that something needed to be done.

“All of us had the luxury of sitting at home and using the lockdown to bake bread or make coffee, while watching the news of migrant labourers walking home, people losing their jobs, and the general disarray. Being 22-year-old college grads, the cause of education was on our minds,” says Preetha.

She adds that they came across some alarming statistics of young girls dropping out of school in the pandemic.

“We wanted to use our privilege to make some noise. The auto is a vehicle very unique to India, and South Asia. Almost everyone has ridden in one. In fact, it is one of the (very few) things that we and the girls we’re trying to educate have in common. This is why the autorickshaw was our vehicle of choice,” says Preetha.

The team had aligned to Project Nanhi Kali. The NGO had started in 1996 at the KC Mahindra Education Trust, with the objective of educating underprivileged girls in India.

The project was incepted against the backdrop of the spiralling population growth rate, low female literacy level, and low female workforce participation. In addition, social issues such as child marriage and child labour were commonplace in many parts of India, especially rural areas.

Over the years, Project Nanhi Kali has reached out to over 4,50,000 underprivileged girls across 14 states in India. From the hamlets of Krishnagiri in Tamil Nadu, the rural outskirts of Varanasi, the tribal hills of Araku in Andhra Pradesh, the sub-plan tribal district of Udaipur, the crowded slums of Mumbai, Delhi and Kolkata, to the more remote but cooler locations of Darjeeling, Project Nanhi Kali is ensuring that girls complete 10 years of formal schooling.

“As young college grads, we all align very strongly with this cause. We reached out to Project Nanhi Kali and pitched them this insane, absurd idea and they were extremely encouraging! All funds raised from the Auto for Impact campaign go directly to the NGO. We wanted to be as transparent about the proceedings as possible – which is why all our CSR donations would happen with Project Nanhi Kali in the loop at all points,” says Preetha.

The ride of solidarity

“When we work with people who’re also our friends, we find solidarity. And above all, it’s been very, very fun. And that’s the crux of why we did this campaign. Why did we spend hours and hours, sacrifice sleep, and personal time over this? Because it’s been one of the most enriching experiences of our lives – whether it be on the road or off. Because we realised that we could take something that we loved, do it with the people we loved, and make it so much bigger than ourselves,” says Preetha.

They started talking about doing a campaign in August 2020 – Auto for Impact took more than nine months to chart out. No one in the team had had prior experience with volunteering, let alone fundraising at this magnitude.

The task of fundraising

“Our ‘plan’ changed every week depending on what we learnt and how people were responding to us. We started by emailing companies, and got absolutely no replies. Then, we started WhatsApp-ing people, and when even that did not work – we started calling them. Auto for Impact happened because the only thing that was consistent in our ever-changing plans was an element of shamelessness,” says Preetha.

She says they spent the last nine months sending more than 500 emails. “For every name you see on our sponsor list, there are 25 that rejected us. That’s what it took to make this campaign happen,” says Preetha.

She says they had to learn to deal with unfamiliar circumstances. Preetha explains things go wrong, messages get delayed, and a lot of unpredictable scenarios crop up – and they had to learn how to be efficient and professional through all of it.

“The most challenging part for us definitely was fundraising – in fact, there was a time in 2021 when we were convinced that Auto for Impact would not happen because of lack of funds or commitment from sponsors,” says Preetha.

They now have 12 sponsors on board and have managed to raise enough money to educate more than 450 young girls. Auto for Impact is intended to be a once in a lifetime, one-of-its-kind campaign. But they hope for the campaign to live on in the “___ for Impact” format.

“We decided to take an auto, someone else can Draw for Impact, or Cook for Impact or Sing for Impact. We want to show everyone that social work can also look bright, and colourful, and fun. Social work can look like travelling in an auto with your friends. It can also look like organising a small online jam session for your friends. Or a crowdfunded meal. We want to tell people that even the smallest gestures can be about something larger than ourselves, and no matter what the scale of your impact is, as long as you’re trying to make one – that’s what matters,” says Preetha.

How to Test Your Way to Better Instagram Ads (and Conversions)