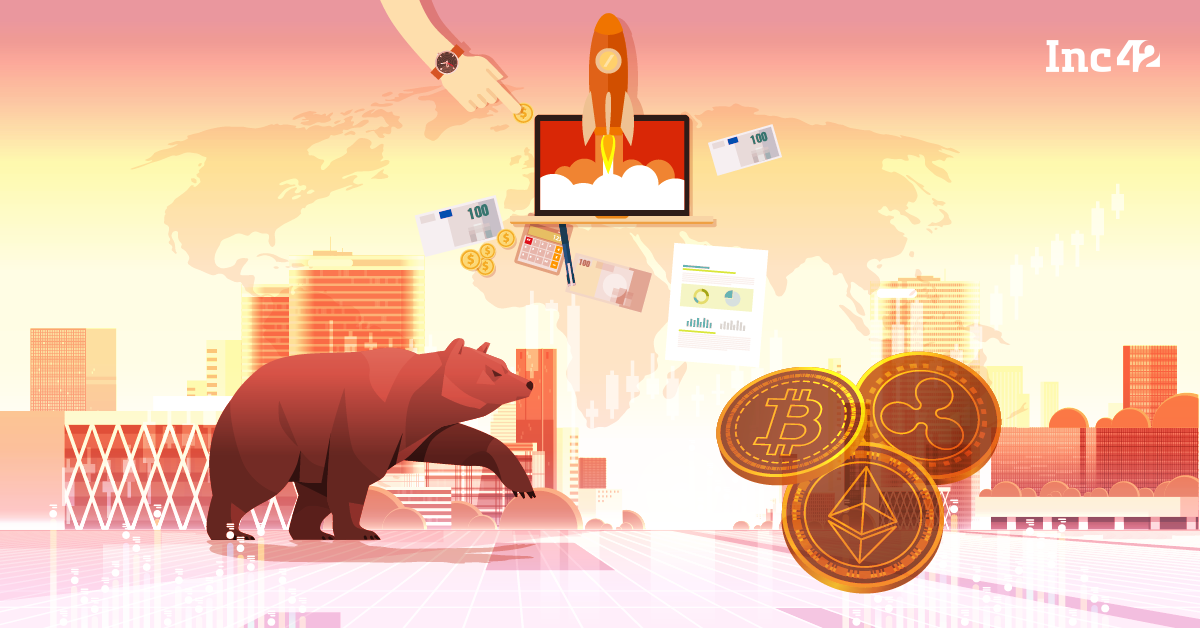 Post the June meltdown, some investors have delayed their funding cheques and asked the startups to wait until September

It never rains, but it pours. And it is never a sedate scenario when retail investors or venture capitalists put their money into any crypto business.

In the past eight months, the cryptocurrency market cap has sunk below the $1 Tn mark, wiping off $2 Tn of investor money. Popular cryptos like bitcoin and ether could not escape the downward push, either. Bitcoin dipped to $17.6K in June 2022 but managed to reach $22K, down from $70K in November 2021. Ether, from the ethereum network, also breached its key support level of $1K on June 18, dropping from $1,076 to $986 in less than two hours.

It was all about a chain reaction across the ecosystem. Every block worked in sync, following the meltdown of TerraUSD/UST, an algorithmic stablecoin, and its sister currency LUNA. As prices fell, some crypto startups and funds like Coinbase-backed Vauld, Three Arrows Capital and Voyager Digital have gone bankrupt.

Do you consider this a brutal comedown?

Think again. Things got murkier a few days ago when Binance, the world’s biggest crypto exchange, denied completing its acquisition of WazirX, once the poster boy of the crypto exchanges operating in India. The company hit back, a tweet war ensued, and no resolution has been reached yet as to who owns WazirX. Interestingly, the turbulence came in the wake of a recent ED crackdown on WazirX.

If the VC community had tightened their purse strings earlier due to the onset of a funding winter, they must be flummoxed by now. As it is, there has been a lag in fulfilling funding promises after the meltdown.

Two Indian startups in the crypto space told Inc42 that the deals were delayed by at least two months, and hence, they could not make the funding official yet.

Would the current scenario, a grave situation involving compliance with the law of the land, make matters worse? Or has the funding freeze already forced VCs to rework their investment strategy?

Inc42 has spoken to many venture capitalists to understand their perspective regarding the crypto winter, the market turmoil and the recent taxes slapped on crypto earnings that may hinder crypto startups’ transactions and growth.

The Crypto Winter In India: Cyclical Or Crisis-Driven?

Despite a turbulent market, VC funding in crypto startups has not slowed down globally. According to a J.P. Morgan report, venture capital investment in this space reached $17.9 Bn by July this year, set to surpass the record haul of $29.4 Bn in 2021.

“While many of the ‘traditional sectors’, including software and pharma & biotech continued to represent the majority of VC investment activity in 2022, one of the most interesting trends we have observed in recent quarters has been the record pace of VC investment into startups in the crypto and blockchain industries,” Steven Alexopoulos, an analyst at J.P. Morgan wrote in a note.

“The nature of the market is cyclical, and downturns are part of the journey. There is a lot of dry powder in the market, with Andreessen Horowitz (a16z) announcing a $4.5 Bn fund besides a $600 Mn gaming fund. Then there are further allocations from Union Square Ventures ($625 Mn) and Dragonfly Capital ($650 Mn), while $2 Bn for Sequoia India and $275 Mn for Lightspeed India have been earmarked as well. Each of them has a significant focus on Web3,” he said.

“We are seeing no slowdown from founders, and we intend to match their pace of innovation,” said Kanakia, adding that the number of funding pitches had gone north compared to last year as more founders resonate with the VC’s mission and method.

“At 100X, we are evaluating and actively investing in Web3 startups. Nothing has changed for us. Cycles will come and go, but we are here to find and invest in companies that will last for decades. We have previously invested in companies like Deefy (the world’s first collateral-less payment infra protocol enabling people to rent, loan and BNPL on NFTs) and Strive.Social (a marketplace for NFT fractionalisation). We have a few other investments in stealth.”

The VC firm invested in eight Indian startups in the Web3 space and wrote a cheque of INR 1.25 Cr for each of these startups.

Many industry stakeholders term the 2022 ‘downturn’ as ‘different’, unlike the previous crashes. “It is not a mere bubble burst when a stablecoin gets destabilised; it becomes an existential concern,” said a California-based Indian-origin crypto investor who used to run an index fund.

Crypto startups in India (like those mentioned earlier) also feel the chill as raising capital is now more difficult, and funding deals get inordinately delayed. One reason for this could be investment diversification, as the fast penetration of Web3 and the metaverse in the global digital space has thrown open many opportunities beyond digital tokens and their use cases.

Stringent taxation (more on that later) and uncertainties over crypto regulations in India have also added to the woes of crypto players. Some consider this a part of the teething problem as the crypto industry is nascent in India, and short-term turbulence is expected.

In contrast, many industry stakeholders forecast gloomy days and a likely valuation hit for VC-funded companies. However, the impact will be more visible from Series A onwards than at angel or seed rounds, believe experts.

Speaking to Inc42, managing partner and CEO Vineet Budki, partner and CEO of Cypher Capital, said that the crypto winter has definitely reduced investors’ appetite to take risky bets. This has reduced the deal count to 4-6 a month from the earlier double-digit figure. We have also become super selective and are looking at companies with solid teams, business models, and a valid, doable road map.”

Cypher’s ticket size varies between $250K and $1 Mn, and the company usually co-invests with others instead of leading the investments. Among its India investments, the most significant ones are Matterless, Finblox, Rainfall, MetaOne and Astra Protocol, among others. Other notable crypto startup funding done earlier included Casper Labs, Torus, Splinterlands, Fractal, Poolz, Paid Network, SingularityDao and more.

Two of the three crypto startups in the funding race told Inc42 that lead investors advised them to go slow on capital raising. Without naming the investors, one of the founders said, “They initially agreed to close the deal in July. But now they are saying they will sign the cheque by August-end or September.”

However, experts believe things may go south further. David Nage, a VC portfolio manager at Arca, a US-based digital assets management firm, recently told TC that deals are taking much longer to close, and company valuations are falling during the (crypto) downturn.

“Some VCs are deploying capital during investor-friendly conditions. There’s been this kind of viral dialogue that sometime around September, valuations are gonna come down even more significantly, and it’s just gonna be a frenzy,” he added.

In March 2022, the Indian government announced a host of tax regulations, sending a wave of shock and disappointment, especially among retail investors.

But have these also impacted VC interest and compelled them to defer their India funding plans?

Budki of Cypher Capital did not think so. “We are long-term institutional investors and invest in projects that are raising venture rounds much before they list. These startups can take six months to three years to get listed and can offer multiples. Hence, the taxation does not matter.”

According to him, the current market conditions are cyclical, and it happened twice before. So, this is nothing new. “With 300 Mn wallets, the Indian crypto market is still in an early stage. After all, the country is home to 3% of the global population, and we will see further developments. The crypto growth is still 4-10 years away,” he said.

“We have a 3-5 year timeframe in mind when we invest from the current fund. Since tokens are highly liquid assets, post liquid we book profits at peak valuations and also keep hodling these digital assets as we believe that some of the sub-sectors and startups have not even started yet,” observed Budki.

100X.VC had similar thoughts. “We are here to be long-term investors and partners for the companies. By default, Web3 is a space where you have to play long-term. We are looking at a 7-10 year horizon to create significant value. Exits will come through IPOs, acquisitions and token sales over time. But value creation comes first,” said Kanakiya.

Other funding professionals also feel tax regulations have not impacted venture capital’s long-term investment plans. “In the long term, it will fade away as the angel tax did. So, we anticipate the short-term impact, but the government is wise enough to take decisions that will help the industry move forward,” said an angel investor who did not wish to be named.

But not everyone feels so optimistic. The new tax laws have seen a sharp drop in retail interest, which may not augur well for crypto startups and institutional investors. Currently, India has approximately 25 Mn retail users, and most funding happened on the back of an overwhelming public interest in the digital asset space. Unless that interest and the growth rebound, the funding momentum may not continue, think experts.

However, the 1% TDS has just come into effect, and it will take time to evaluate its impact on crypto startups.

Things To Stabilise, But Performance Will Matter Most

While VCs and industry insiders expect more funding and deals in H2 2022, a huge buildout or high yields may not be possible right now. Simply put, funding houses will not chase every crypto startup in orbit due to FOMO. And growth in this space will primarily depend on the financial health of the startups if the crypto winter continues.

Although the implications of the new tax regime are still unclear, Ken Li, executive director of Binance Labs, said, “Our general perspective is that at the stage we invest, the most important quality is the long-termism of the founders and their talent and tenacity. Great founders can succeed regardless of any externalities.”

“The road for crypto in India looks slow and murky in the near term,” said Khaleelulla Baig, cofounder and CEO of Singapore-based crypto investment platform Koinbasket.

“But in the long run, the crypto wave driven by public sentiment may push the government to take a dovish stance. I also see the total market cap of the crypto market crossing $10 Tn within the next five years, which would attract Indian investors. Things will stabilise over the next few quarters, and good crypto projects will reach new highs within the next two years,” Baig added.

The crypto market has entered a consolidation phase and will remain widely range-bound in the second half of 2022. This space will also see more regulatory clarity coming from G7 nations and more adoption from economically developing countries, he concluded.

Safe and Hygienic Manufacturing: What the Cosmetic Industry Is Following Now?