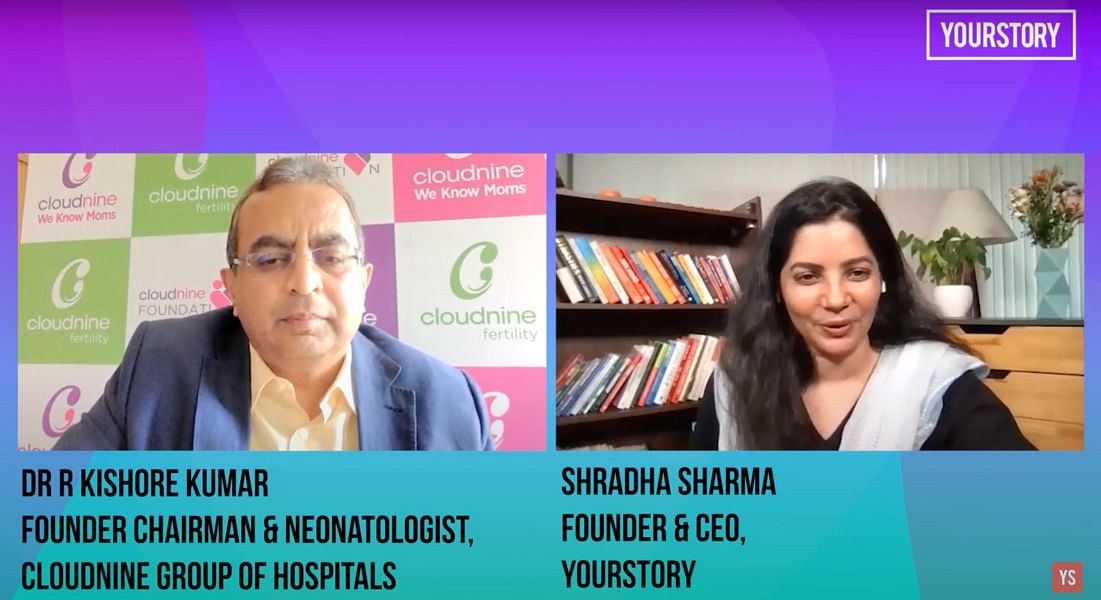 The first two waves of the COVID-19 pandemic brought with them a large number of infections, many of which also proved fatal. Amid the fear of a third wave hitting the country, people across the country are now wondering whether this wave will be dangerous, particularly for children and teenagers.

Not only are parents and children anxious but many of them are confused between normal flu and COVID-19, and this confusion has only increased. Moreover, social media is full of unverified rumours, which have further fuelled fear.

To get an in-depth view of the prevailing situation, YourStory recently connected with Dr R Kishore Kumar, Founder of ﻿Cloudnine﻿ – a hospital chain.

Dr Kishore is an internationally acclaimed neonatologist (a specialist for newborns) who has worked in four continents over the course of his career – covering North America, the UK, Asia, and 12 years in Australia. He completed his MBBS from Gulbarga University and his DCH from Mysore University and London. He also has an MD with a gold medal from Mysore University, MRCP (Paed) and FRCPCH from the UK as well as MRCPI (Paed), and FRCPI from Ireland. He has also completed his Fellowship in Neonatal ICU with an FRACP from Melbourne, Australia.

He founded Cloudnine in 2007 to realise his vision of high-quality child and maternity healthcare in India, on par with international standards. As the Founding Chairman, Managing Director and senior neonatologist, he made sure to have instituted preventive protocols from day one of the pandemic.

In conversation with YourStory Founder and CEO Shradha Sharma, Dr Kishore talked about:

Here is an edited excerpt from the conversation:

Shradha Sharma [SS]: The expected ‘third wave’ is said to be more critical for children. What changed between the first and the third wave, and why are children more prone to catching the infection this time?

Dr R Kishore [RK]: Nobody could predict the pandemic. Predicting that the third wave will impact children is wrong. People believe that because the first wave affected elderly people, the second wave affected people predominantly between the ages of 30 and 50. So, the third wave will predominantly affect people below the age of 30.  But there is no valid mathematical calculation you can do here.

SS: What precautions can parents take to reduce or prevent the spread of this virus among their children?

RK: Among all the things said about the pandemic, one true thing is that ‘vaccine can protect everyone from death, but what it doesn’t protect you from is getting infected.’ That’s where people talk about 70-90 percent efficacy. This means that if you vaccinate 100 people, 99.9 percent will neither die from the infection, nor will they get a serious disease. However, they may still have mild disease.

So we need to vaccinate everybody because children will catch the disease only if adults get the disease. So if adults can behave responsibly, wear proper masks when outside, wash hands at regular intervals, and maintain social distancing, then children won’t get infected.

Also, as adults, we should create a positive atmosphere for the children. Stop watching negative news that affects the children. Read in isolation on social media or news websites – that too for 5-10 minutes and from a reliable source.

Most pandemics have lasted for two years. Anything less than two years is very, very optimistic. The earliest we can hope for any relief from the pandemic will be December 2021. So I think you have to continue to remain vigilant and maintain basic principles to protect children both from physical and mental illness.

SS: How can pregnant mothers and new mothers ensure they protect themselves and their babies from the third wave?

RK: We advocated vaccinations for pregnant women and lactating mothers way earlier, however, the government regulations came in around June. We are seeing a lot of pregnant women who got infected and delivering babies who are suffering from MIS-C (Multisystem inflammatory syndrome in children). Typically, babies get infected after four to six weeks if somebody has COVID-19, but the chances of getting MIS-C is still very rare. The morbidity in children is very, very less compared to adults, because adults have comorbidities like hypertension, diabetes, obesity, chronic obstructive pulmonary disease, etc.

But the majority of the children will not have to gasp for oxygen; that’s unlikely to happen in children because they have an angiotensin converting enzyme to receptors, which is far less in the lungs. Also, the regeneration capacity of the lung is much quicker. So they are not going to suffer like what we saw in the second wave.

SS: What are some key myths surrounding the third wave of the pandemic?

RK: During the first and the second wave, common myths were that if you have got BCG or MMR vaccine, or if you are using turmeric, taking steam inhalation, using ghee in the nose, and taking lemon juice every day or taking kadas, you will not get infected. But all these theories were proven wrong.

Overconfidence is what kills you because you go and expose yourself to the risk factors. And that’s exactly what is happening with the people who are getting vaccinated. They think that they’re protected completely from the virus and they start behaving irrationally and not wearing a mask – putting their family members at risk.

In fact, when you are vaccinated, you are only protected from death and serious disease, however, your chances of having an asymptomatic infection remain much higher. And then you carry that infection from outside, go inside, infect the family members, and they’ll end up in problems.

So it’s very, very important that even if you’re vaccinated, your behaviour should continue to prevent COVID-19 infections because we are in a pandemic. Pandemic fatigue is not an excuse to not take precautions they have to take.

SS: What are the common symptoms of infection in children? What precautions can parents take to reduce or prevent the spread of this virus in their children?

RK: Monsoon is a time when children usually get a lot of viral infections. India is also a noted hub for typhoid, malaria, and other such infections.  Just because the pandemic is there, it doesn’t mean that normal infections will disappear. Everyone has to remember that every fever is not COVID-19.

The second thing is that most children will get mild infections like cold cough fever, which lasts for three to four days because COVID-19 is also a viral infection, and it usually disappears by the end of the week. In the first week of illness, nobody lands up in problems, even adults. Whoever lands up in problems is usually in the second or third week of the illness. When the inflammation in the body takes over, and there is hyper inflammation, that’s when the side effects and other manifestations happen.

So as long as everybody’s okay for the first week, then you need to watch out for the second week. If you start developing more symptoms, that’s when you need to see the doctor quickly. So panicking doesn’t help. Definitely staying calm will help.

SS: The government is looking to roll out vaccinations for children above the age of 12 in September. But we still don’t have any measures for young children unlike countries in the West. When do you expect this to be rolled out for children in India?

RK: The West has mRNA vaccines, which has not been tested for long-term safety nets for anybody, including the older age group. Now, there are reports in academic journals that this vaccine, when it’s given to young children, is causing inflammation of the heart or causing myocarditis. So the vaccine, which is safer in adults may not be safe in children, especially the newer generation.

The good thing about Indian vaccines — Covaxin and Covishield — are technology-based. Both these have been tested for quite some time in various diseases. So, in other words, the safety nets of these vaccines are much easier to prove.

I think once the safety is proven, which will come out at the end of August or September, we should definitely have a vaccine for children in either October or November. And I feel that as soon as it’s available, every parent should be given that vaccine.

SS: What do you have to say about pediatric healthcare infrastructure in our country?

RK: As of today, the pediatric infrastructure in the country is reasonably robust, except in a few states where the number of paediatricians is less. One in 1,000 children will get a serious disease, not everybody. And even if that were to happen, if a good tracking system exists, we have enough beds.

So a good tracking system, referring children who really need admission to the proper centres, and identifying those centres will go a long way.

The latest ICMR survey conducted in quite a few states indicates that we have only 33 percent of people who are not infected or vaccinated. So we have a potential target of 40 crore people catching the viral infection. Unless they’re vaccinated quickly, we will have a third wave.

The only way of preventing that is responsible behaviour. So, if we are careful and follow the rules and regulations, then we can avoid the third wave.

In all, I think the pandemic has given a golden opportunity for all the parents. It’s a good time to practice parenting, spend quality time with the kids, read stories, and teach some religious ethics because I believe religion brings principles into everybody’s life. And I’m not supporting any particular religion.

The more you utilise this opportunity for bonding among the family, the better it is. And that will avoid mental anxieties and illness in any family. There are lots of things that can be done to keep them engaged, rather than grumbling and leading to their mental anxiety.

SS: What is Cloudnine doing to protect and prepare your healthcare workers ahead of the third wave?

RK: In the wake of the pandemic, Cloudnine has taken various measures from day one to help prevent the exposure and spread of the virus at the minimum level. This includes:

How to Nail your Social Strategy ​​on a Global Scale