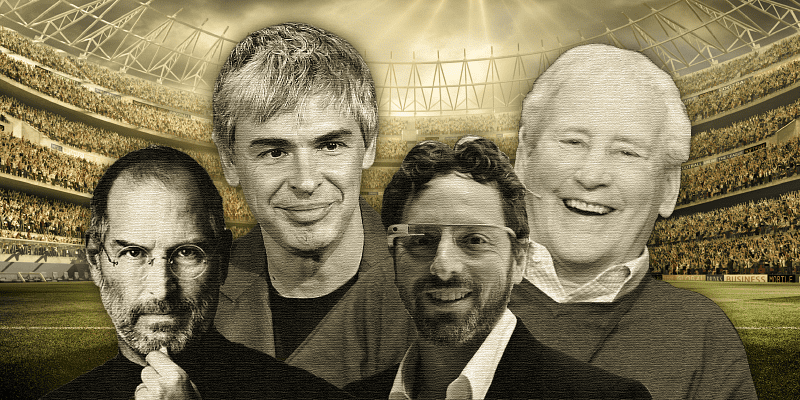 Bill, who originally started his career as a college football coach, worked with companies such as JWT and Kodak, and went on to become the VP of Marketing and Board Director for Apple Inc.

However, he got to fame when he joined Apple. It was under Bill that Apple’s ground-breaking advertisement for the Macintosh, titled ‘1984’, was conceptualised, which was against the wishes of the Apple Board.

The story has it that when he showed ‘1984 won’t be like 1984’ advertisement, Steve Jobs loved it, but the Board hated it. They found it too costly and too controversial. While they were looking for another advertiser, Bill decided to run the ad without informing the Board. And rest, as they say, is history. The ad went on to become the most famous commercial of all time.

Much later, in 1996, when Steve, who was ousted from Apple, returned, he asked Bill to join the Board to save the then floundering and failing company, as he wanted people he trusted.

In the foreword to the book Trillion Dollar Coach: The Leadership Playbook of Silicon Valley’s Bill Campbell, it says:

“Bill had become so influential that he went on a weekly Sunday walk with Steve Jobs, and the Google founders have said they couldn’t have made it without him.”

Authored by Google’s former CEO and Chairman, Eric Schmidt; Jonathan Rosenberg, SVP, Alphabet; and Alan Eagle, Director, Google; the book goes on to list different leadership lessons that one can learn from Bill.

It says, Bill ensured teams never forgot the balance between the humane and operational aspects of running the company.

Stories about Bill and his teachings still float around the Silicon Valley, four years after he died of cancer.

Bill also had a unique way of showering love. Known as Billisms, the top 10 ‘Billisms’ were also printed on the back side of the booklet given to the guests at his memorial service.

Let’s take a look at some of them, which have inspired and coached many modern-day entrepreneurs.

Teams excel and grow with a sense of safety

The book quotes: “Excellent teams at Google had psychological safety (people know that if they took risks, their manager would have their back). The teams had clear goals, each role was meaningful, and members were reliable and confident that the team’s mission would make a difference. You’ll see that Bill was a master at establishing those conditions: he went to extraordinary lengths to build safety, clarity, meaning, dependability, and impact into each team he coached.”

Bill taught that it wasn’t the big gestures that made one a leader, but the seemingly small ones. In the middle of Board meetings, Bill was known to give winks and blow kisses – simply to show he cared.

A hug along with a curse was Bill’s style and way of showing love. And that is what he taught all the top leaders – teams are essentially made of people and they need to be respected and shown love.

A full-page ad in the San Jose Mercury News, as an obituary by Claris, an offshoot of the team he led, said: So long, Coach. “Bill, we’ll miss your leadership, your vision, your wisdom, your friendship, and your spirit… you taught us how to stand on our own. You built us to last. And even though you’re no longer coaching our team, we’re going to do our best to keep making you proud.”

Be there for your team, understand each person is different

As Intuit co-founder and CEO Scott Cook puts it – Bill was a techni-colour rainbow. He appreciated that each person had a different story and different background. He was also very nuanced and different in the way he approached growth and leadership challenges.

When Bill became the CEO of Intuit in 1994, he guided the company towards growth and success, before stepping down in 2000. Bill was always available – be it for a chat or a hug, and during each of this, he helped people to gain perspective and insight, and guide them to make decisions. He would ask questions and genuinely be interested in knowing people.

Build teams that act as communities

During Bill’s time at Google, the search engine giant learnt one thing – the success of companies are dependent on making teams act as communities. It is important to integrate interests and put aside individual differences. The idea is to be collectively obsessed with what is good for the company.

The book states – research shows that when people feel like they are part of a supportive community at work, they are more engaged with their jobs and more productive. Conversely, a lack of community is a leading factor in job burnout.

But people who are talented and high-performers are not easy followers. They are strong-willed, ambitious, aggressive, smart, and opinionated. They are always looking to rise to the next level. So, internal goals and personal conflicts can take centre stage. The trick here is to bring this team of competing individuals into a community and align them to one goal.

This is where Bill helped – he was someone who not only worked with individuals but the team as a whole to reduce tensions and nurture a sense of community.

For that, it is important to not just work with the team leader or the executive in-charge, but the entire team. Bill is known to have attended Eric Schmidt’s Google staff meetings on a regular basis.

Make your managers coaches – Your title makes you a manager, your people make you a leader

“If you’re a great manager, your people will make you a leader. They acclaim that, not you.”

While having a coach sounds great, it isn’t practical or lucrative. So, the best bet is to empower your manager to be a coach. High performing teams need a balance and a mix of savvy managers and caring coaches. The idea is to bring in a high level of honesty and a better understanding of management and people.

When Larry and Sergey were opposed to Bill’s proposal of hiring managers, they decided to speak to a few engineers to check if they wanted managers, and most of them said yes. These engineers liked being managed as long as their manager was someone they could learn something from.

While Bill brought people together and created a strong team culture, he knew that results mattered. He would say, people who are successful run their companies well. They have good processes; they make sure their people are accountable; they know how to hire great people; how to evaluate them and give feedback; and they pay them well. You need to ensure the entire team plays a result-oriented game.

A study conducted in 2012, which was taught in the video game industry, found a strong middle management accounted for close to 22 percent of the variance in revenue, while creative design contributed to seven percent.

The book quotes: “How do you bring people around and help them flourish in your environment? It is not by being a dictator or it is not by telling them what to do. It’s making sure they feel valued by being in the room with you. Listen and pay attention. This is what great managers do.”

The more talented the subordinate, the less likely they will simply follow orders.

A manager becomes an authority only when they can establish credibility with their peers, superiors, and subordinates. If you are an authoritarian, not only does it ruffle feathers, but more people are likely to leave the team.

“You need to project humility and selflessness, which projects that you care about the company and about the people.”

It is always about ‘The People’

Bill’s management and leadership philosophy is summed up in three words: ‘It’s the people’.

The manifesto starts with – People are the foundation of any company’s success. The primary job of each manager is to help people be more effective in their job and to grow and develop. We have great people who want to do well, are capable of doing great things, and come to work fired up to do them. Great people flourish in an environment that support, respect, and trust.

It goes on to define respect, explain what trust means, and says: Trust means freeing people to do their jobs and to make decisions. It means knowing people want to do well and believing that they will.

When can you get vaccinated

4 Key highlights from the healthcare panel at TechSparks 2021

[Funding alert] Unbox Robotics raises $1.2M in pre-Series A round

How artists are dealing with Covid lockdown, and the challenges and opportunities they see in these challenging times

The impact of emerging tech on accounting and assurance

Quick commerce to become $5B opportunity by 2025: RedSeer